Gorgeous visuals are mangled by a zombified story. 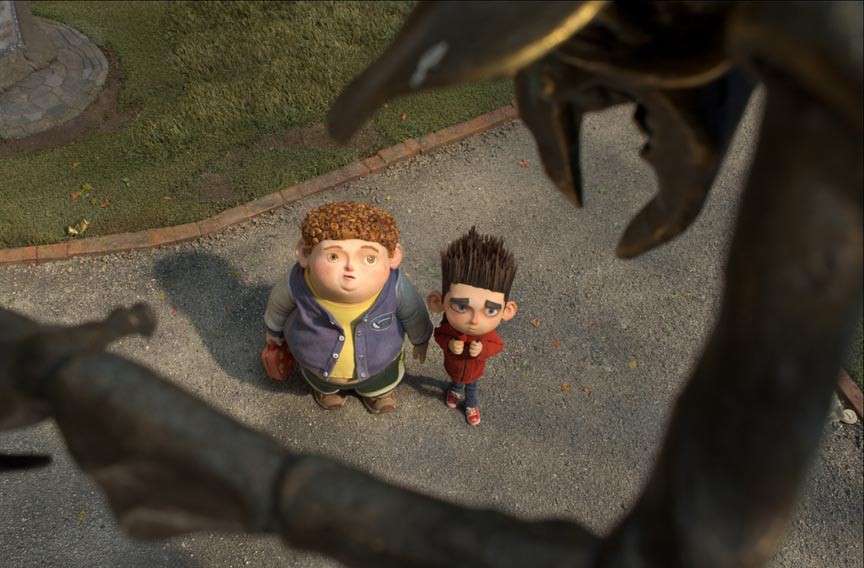 Why is Norman so bummed? The titular middle-school antihero of the stop-motion animated feature "ParaNorman" (voiced by Kodi Smit-McPhee) lives in an 11-year-old boy's paradise of creepy toys, spiky hair and daily adventure. His life is bugs, slime, slimy bugs, and, most importantly, ghosts. Norman has the gift of seeing green-glowing spirits of the dead, both people and animals. They want his help saving his town, a task Norman resists sulkily through the entire movie.

But why? Norman's favorite TV is late-night creature features; his bedroom is stacked floor to ceiling with the plush and plastic undead; his cell phone chimes the theme to "Friday the 13th." His so-called burden is the equivalent of an action figure being called upon by G.I. Joe to defend the country against invading ninjas. Why isn't Norman stoked?

The movie offers a reason, but, unlike the exorbitant and groundbreaking animation used to painstakingly construct the film, Norman's motivations feel cheap and hackneyed. Norman is marginalized by society for his second sight, as if it were a disability and not a super-cool, ghost-busting power. Obligingly, his parents (Jeff Garlin and Leslie Mann) are very worried, the other kids at school pick on him and call him a freak, and his older sister (Anna Kendrick) is, like, so totally over it. Just about everyone except his overweight friend, Neil (Tucker Albrizzi), thinks Norman is weird.

It's a good thing contrivances don't really register with the age group "ParaNorman" is aimed at. In fact, making everyone else besides the hero a bully or a nincompoop, or both, likely is a selling point. Therefore, dad is a bellowing buffoon, mom tiptoes around her son with a quizzical look on her face and big sis prattles endlessly on her smart phone. Norman is also bullied by a pinhead named Alvin (Christopher Mintz-Plasse) and chauffeured through much of the film by a muscle-bound jock (Casey Affleck) his sister is goo-goo for. With few exceptions, including Norman's far-too-briefly resurrected grandma (Elaine Stritch), "ParaNorman" deals mostly in caricatures.

It's not really an overwhelming criticism if you're talking pre-teen audience. But it's not great children's storytelling, either. At the screening I attended the little ones were, if not laughing as often as the gags arrived on screen, at least engaged. "This is my favorite part," whispered one kid to his dad during a scene in which Norman's restroom stall blows up, raining streamers of toilet paper.

It is, in its way, a memorable scene. It is also the moment, pretty tardy at around the 35- to 40-minute mark of a muddled and meandering story, when we finally get to the central conflict. Norman's New England town was once cursed by a witch because she was tried by the town's elders, Salem-style. Norman is the latest in a long line of, well, something-or-others, who have the ability to talk to the dead, and thereby talk to the witch, and tell her something that theoretically will get rid of her. Let's just put it this way: The entire story could be revealed and it wouldn't count as a spoiler because it doesn't really make any sense.

Zombies pop out of graves in one of many thinly developed premises, prompting a really long chase sequence mostly interesting in a how'd-those-stop-motion-animators-do-that? kind of way. It's not as interesting as action, however, or humor. Although you can see the jokes as obviously as Norman sees ghosts, they just aren't that funny, even to the Skittles set. They laughed out loud about three, three-and-a-half times. I did once.

"ParaNorman" was produced by Laika, a boutique film studio that specializes in stop-motion animation. Its last film, 2009's "Coraline," also told a story that was noticeably weaker than its visuals, but "ParaNorman" is completely generic by comparison. It's offered in 3-D and 2-D, but no amount of technology will mollify parents who, routinely spoiled by the big-studio kid flicks, expect to be part of the audience. This is not one of those movies.

So many hours, years, even, of highly skilled labor went into "ParaNorman," it's tough to conclude what must be concluded: The film looks pretty, but it's also pretty dumb. Dumb turns to dull late in the third act, when a trite attempt to impose a moral lesson jerks the film into an entirely different register. The film's heart is after a Tim-Burton level of finely-crafted creep, but the brains of "ParaNorman" are lost in afternoon Nickelodeon. (PG) 93 min. S