Infused with memories of the director's childhood, this session gives the mental health movie a more personal, authentic touch. 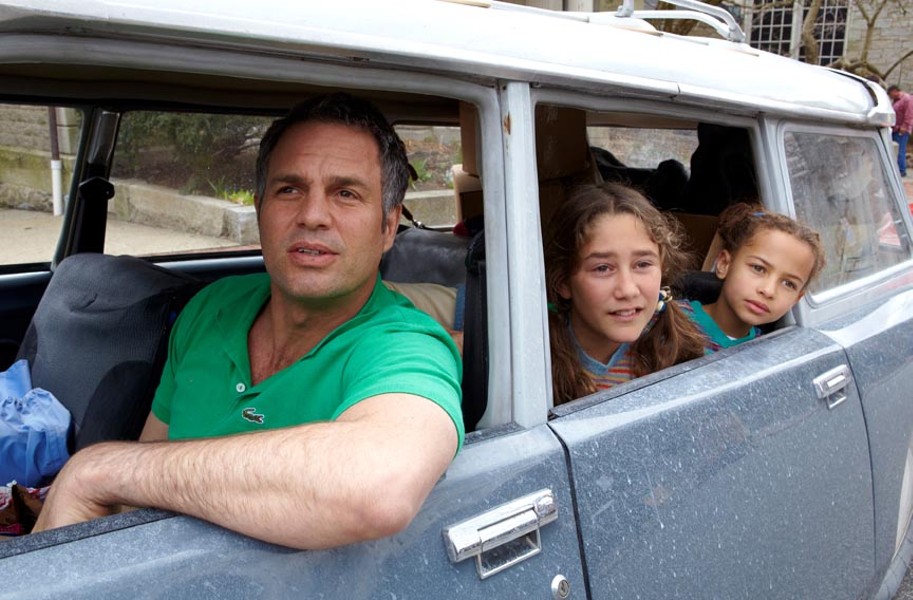 "Infinitely Polar Bear” is about a family dealing with a father who is mentally unstable. The family’s youngest child, Faith (Ashley Aufderheide), thinks her dad, Cameron (Mark Ruffalo), has “polar bear disease.” It’s really a form of bipolar disorder, but her malapropism speaks volumes about the movie’s approach.

The film was adapted from a play by writer and director Maya Forbes, who based both versions on her childhood, imbuing the experiences of Cameron’s wife, Maggie (Zoe Saldana), and their elementary-school-age daughters Amelia (Imogene Wolodarsky) and Faith with an authenticity uncommon to the usual disease movie. “Infinitely Polar Bear” isn’t about the diagnosis of a man, but the diagnosis of a family.

Their story takes place in Boston in the mid-1970s, and the time and setting is important. Cameron and Maggie are a mixed-race couple, and because of Cameron’s condition, Maggie is the sole breadwinner. Both situations create major obstacles in a relatively old-fashioned city that still places unfair value on ancestry, tradition and — especially depressing — race and gender.

Cameron is from one of Boston’s aristocratic families and probably could choose any career he wanted, if he didn’t occasionally walk around outside during the day in his underwear. His wealthy grandmother pays for a spare, depressing, two-bedroom flat, but that’s it. Otherwise he’s on its own, forcing Maggie to New York in search of higher education at the risk of leaving the girls with their loving but unpredictable father.

Most of the film centers on this period, with Maggie away and Amelia and Faith trying to grow up, go to school and make friends while suffering the embarrassment of a dad who’s a well-meaning weirdo. Cameron’s moods shift like the weather on a deserted island. One day he’ll fastidiously clean the apartment like he’s getting it ready for a photo shoot, and later put just as much effort into taping it off like he’s creating one of Howard Hughes’ germ-free zones. Other times the competing aesthetics combine into something resembling a playroom for Salvador Dali, and at others a hoarder’s nest. The girls are too mortified to have friends over.

In one frantic scene Cameron trades the family’s clunky old Volvo for a car that’s much, much worse. “There’s no floor,” Faith complains in alarm as the girls huddle in the back seat while pavement zooms by under their feet. In another scene, he pouts on the edge of the playground after his girls tell him it’s weird for a grown man to want to play with kids. Eventually they relent. If there’s one benefit to Cameron’s mania it’s an unfiltered enthusiasm that helps him connect instantly with children. It’s only difficult for him to be a responsible adult, which gives his extended tour of dad duty a palpable sense of anxiety.

You might expect a movie with this subject matter to be in a constant state of melancholy, but real life is as unpredictable as Cameron. “Infinitely Polar Bear” often is surprisingly funny. Faith and her sister are forced to grow up quickly as a defense mechanism against their father’s often frustrating behavior. They develop a cynical, exasperated disposition that eventually becomes so incongruous to their ages it develops into comic relief.

Giving child actors such difficult, grown-up parts can be dicey, but Wolodarsky and Aufderheide are wonderful in their respective roles, and even the most difficult scenes with Ruffalo never feel staged. The result is so much more personal than the usual topical Hollywood movie. It doesn’t come across as educational or wrapped-up with a tidy, happy ending. You can tell Forbes lived this life, or at least one very similar to it.

“Infinitely Polar Bear” is a character study in which the character is a family. Its merits are honesty and originality. The only thing it lacks is an expressive style. This isn’t a movie that seems interested in its own medium, and you wish at times for a more eloquent visual touch that might make these characters’ experiences even more memorable. Is Forbes really a filmmaker, or a survivor with a hard-won script and a film crew? It’s a reasonable question, but not one that should keep you from seeking out this infinitely individual story. (R) 90 min. S