This movie is really about the making of "Psycho," but that might be a MacGuffin. 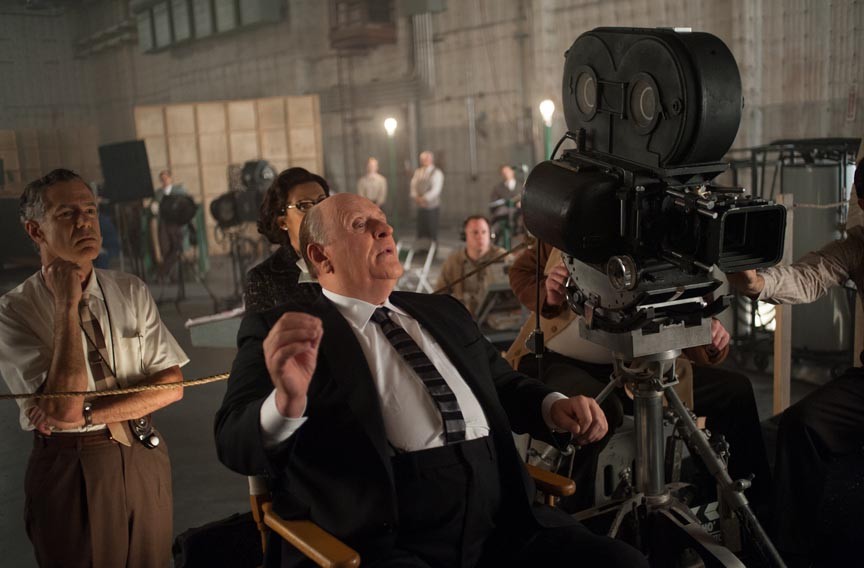 "Hitchcock" is a title worth considering. On the one hand, there's the fact that Alfred Hitchcock, whose contributions to cinema are almost immeasurable, pretty much consecrated the single-word movie title, from "Blackmail" in 1929 to "Psycho" in 1960.

But "Hitchcock" is based upon a much longer title that wouldn't have worked for a movie, Stephen Rebello's "Alfred Hitchcock and the Making of 'Psycho'" — information the film's producers have done an excellent job conveying through a skillful publicity campaign. In one promotional poster, Anthony Hopkins as Hitchcock wields a butcher knife. In another, Scarlett Johansson and James D'Arcy take the place of Janet Leigh and Anthony Perkins in a creative re-creation of the famous original.

"Hitchcock" is undeniably clever. It's academic text for the multiplex; a playful, light and occasionally funny overview of one of the world's most famous directors and his most famous film, anchored by an award-worthy impersonation by Hopkins. But in appealing to the broadest possible audience, it stays safely on the surface. "Psycho" aficionados will find some smart and sneaky references to the film scattered about, but what's missing is what made a film about "Psycho" necessary. What makes it so important?

"Hitchcock" begins at the end of Hitchcock's golden period in the 1950s. The wild success of "North by Northwest" is still happening, but Hitch is already looking for a way to take his career in a different direction. According to the film he happens upon a work of creative nonfiction about a cross-dressing serial murderer. Hitchcock is intrigued, but Paramount's president, Barney Balaban (Richard Portnow), is both averse to the lurid material and insistent that Hitchcock make another Hitchcock movie — another "North by Northwest."

The film's main conflict becomes Hitch's daring plan to finance the picture himself, at the risk of losing everything: his house if the picture is a flop, and his wife, Alma (Helen Mirren), if his consuming attention to his work, particularly his female stars, drives her into the arms of a hack writer (Danny Huston).

That's what's called manufacturing suspense, and Hitchcock did plenty of it. The legendary MacGuffins in his films, whether the secret 39 Steps in "The 39 Steps" or the murder suspicion in "Rear Window," were always just devices to toy with audiences and move characters through important personal development.

But in "Hitchcock" it's just manufactured suspense. It's not as controversial as it was in HBO's recent "The Girl," the sordid tale of the making of "The Birds," and it's not always based in reality, or even remotely so. Hitchcock was an extremely wealthy man when he put up the $800,000 and change for "Psycho" and was never in danger of losing his house. Did he and Alma really have marital problems? True or not, even with Mirren and Hopkins' fine chemistry and performances, it's hard to get too worked up about the romantic tiffs of a couple in their 60s.

Director Sacha Gervasi ("Anvil: the Story of Anvil") makes a valiant effort in his narrative feature debut, however, keeping "Hitchcock's" entertainment value surprisingly high despite limited experience. Rebello co-wrote the script (with Gervasi), and despite interruptions by digressive and pointless scenes such as Hitchcock's dreaming about Ed Gein, the real killer behind Norman Bates), some of the more salient details about "Psycho's" production and release come through.

Other parts of "Hitchcock" give a different impression. While it's fun to watch Hopkins as Hitchcock, when Johansson is on the screen you only wonder if there's anything to learn about Leigh. The move glosses over her. The other mistake "Hitchcock" frequently makes: superficially equating fame with greatness. The legacy of Hitchcock deserves a Hopkins. Leigh was a marginal actress until "Psycho." Casting Johansson was a mistake, if not a wasted opportunity.

"Hitchcock" is about the making of a masterpiece and its maker, not just one of the greatest filmmakers of all time, but arguably one of the greatest artists, and yet it says little of real importance about either. It will be an even greater irony if it wins some Oscars for its efforts. Hitchcock never did. You might even call it a little crazy that such a high profile film about "Psycho" would concentrate on personality quirks at the expense of genius. Did they intend the one-word title as homage? Maybe, but that would also sum up the movie, a well-meaning confection of trivia. (PG-13) 98 min. S