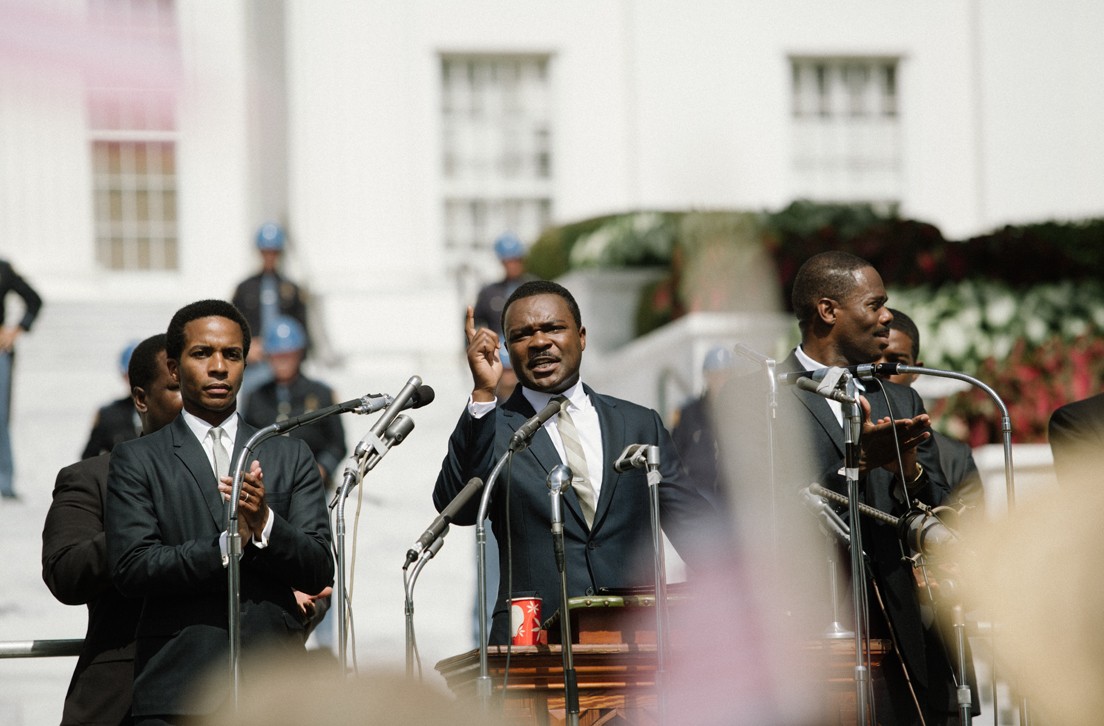 Sometimes a historical drama can be an inaccurate one.

The main concern doesn’t always have to be faithful recreation, and the result can be something like “Selma,” a poignant and rousing portrait of the 1965 Selma Voting Rights Movement that captures the feeling of history even if it doesn’t quite deliver it.

As we learn in the film, Selma, Alabama, is chosen by the Southern Christian Leadership Conference (SCLC) as the staging ground for the fight to end entrenched disenfranchisement of Southern African-Americans, an important battle in the overarching Civil Rights Movement. The right to vote was being systematically obstructed at the local level by registrars enforcing a bureaucratic racism. New legislation was required, the SCLC chooses Selma as the place to stage the fight for it.

The film centers on the involvement of the late Martin Luther King Jr. --wonderfully portrayed by relative unknown David Oyelowo -- and his role as the movement’s most powerful, recognizable voice. That role is analogous to the film itself. Mostly it seeks, and succeeds, like King, in stirring feeling and arousing consciousness.

“Selma” does a great job intertwining Oyelowo’s role with the myriad characters who simultaneously aid King and try to stand in his way. Carmen Ejogo is a quiet force as King’s wife, Coretta, standing by his side through all the danger and the very real infidelity that threatened to bring him down as the face of the Civil Rights Movement. On the other side, Tim Roth turns in a believably spineless rendition of Alabama governor George Wallace. Likewise, Tom Wilkinson is excellent as King’s foil in the White House, President Lyndon Johnson.

While other films tend keep these roles in the periphery, “Selma” allows King and Johnson to square off under the bright lights of the Oval Office, and Wilkinson delivers the right tone, a blusteringly grandiloquent equivocator, waffling between moral duty and political slipperiness. Maybe he’s not quite the epitome of LBJ but at least he’s the epitome of the egregious foot-dragging that required acts like the Selma Movement. In these intercourses between two great men you see not only what King was up against, how he handled it and the result, but how issues that seem almost insurmountably complex due to political reality can be overcome through moral will.

You walk away from “Selma” rejuvenated in the belief of change through courage.

A closer inspection of the actual history complicates these feelings, however, as you learn how skillfully but drastically “Selma” conforms to the popular but ahistorical view that King was the Civil Rights Movement.

When one young activist, Jimmie Lee Jackson (Keith Stanfield), is killed, for example, King is the one who ministers to the family and decides in the moment to push harder on President Johnson. Though the film only depicts King warning Johnson of a planned march from Selma to Montgomery, it implies he came up with the idea and led its organization, when in fact most historians credit King’s lesser known but highly influential partner in the SCLC, James Bevel (Common).

Bevel gives a quiet but stirring prison speech to King that, to a degree, ameliorates his marginalization in the story, and one can understand the overall thinking. Everyone knows the late Rev. King. How many audience members know Bevel? That’s the main criticism one can level at “Selma,” however, as it takes yet another important moment of history and at least partially dumbs it down to not risk confusing or putting off its audience. The film is a powerful and moving tribute to a moment, but not exactly a fully accurate one.

When it plays up friction between the SCLC and another civil rights group for dramatic effect, one wonders if the energy would have been better spent educating the audience that King, though one of history’s greatest orators, was still just one of many men and women who were not only courageous, but intelligent and resourceful. Could Selma and the Civil Rights Movement have happened without him? That’s a question “Selma” raises but doesn’t confront.

These criticisms don’t reduce the film’s emotional impact, however. Though the history is abridged, the feeling is full-throated enough to make audiences weep at the plight of those who fought against a bitter injustice. In that sense “Selma” is a resounding success. Adept at condensing an important and complex series of events to its essence, it impressively almost never stumbles into sanctimony or empty recreation.

Often it is the most powerful opposite: revelation.