David Ayer tells a gritty tale of policing the City of Angels. 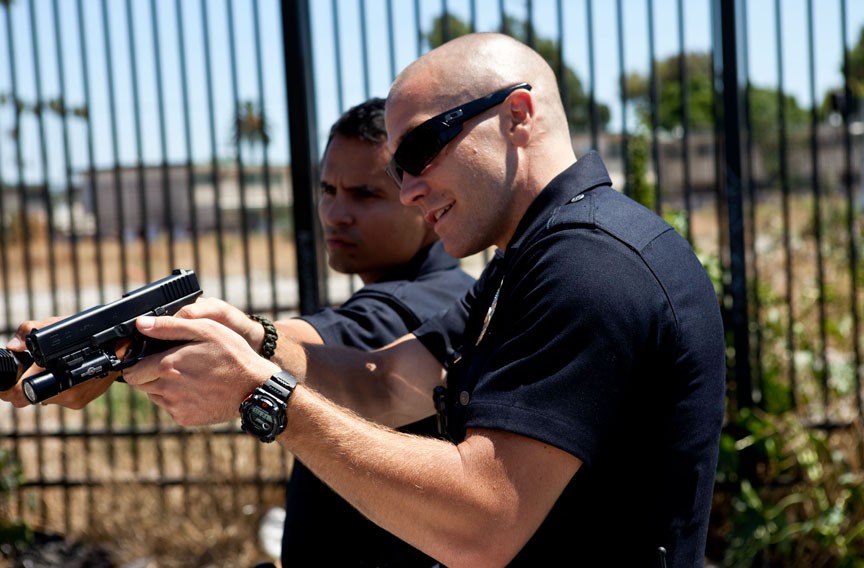 Beginning with his screenplay for the Academy Award-winning "Training Day" (2001), David Ayer has become known as a creator of gritty urban crime stories set in Los Angeles. His latest, "End of Watch," is another examination of the L.A. police, this time with Ayer as writer and director.

It feels like a fitting thematic evolution of Ayer's work, following his last writer-director project, "Harsh Times," starring Christian Bale. Where "Training Day" foregrounds plot, and "Harsh Times" character, "End of Watch" places both in the service of documentary realism, using a combination of fixed and hand-held recording devices to create an effect that frequently comes across like a Hollywood version of the Fox television series "Cops," with movie stars in the leads.

The film begins with a visual that could be right out of that venerable television show: a high-speed pursuit through Los Angeles shot from the perspective of a police cruiser's dashboard camera. The only thing that breaks the documentary feel is a voice-over by officer Brian Taylor (Jake Gyllenhaal), who narrates as if he too is watching the footage, offering a monologue over the fast-paced chase containing insights about police work both banal ("we're a thin blue line") and personal ("we're just people"). The pursuit ends in a wreck. Two suspects emerge before us from their vehicle with weapons drawn and firing. The view never breaks from the grainy dash-cam perspective while Taylor and his partner, Mike Zavala (Michael Peña), fire back, out of sight, gunning down the two men in the bright sun while advancing into the frame. The scene is a perfectly staged, adrenaline-pounding appropriation of reality, and an example of the best of what "End of Watch" accomplishes.

It isn't always gun battles. An equally admirable aspect of Ayer's film is how it recreates the uncertainty of going on patrol, never forecasting what its characters can never know: what lies in wait at the end of a dispatch call. On one, it is children inexplicably tied up in a closet; on another, a guy so high on drugs he can't stop yelling at the imaginary mailman. A random night patrol ends in an equally unpredictable act of heroism. It would be fully satisfying to merely watch Taylor and Zavala go about their brave business for the rest of the film, in a Los Angeles that Ayer captures in all its singularly sun-drenched, graffiti-strewn and sublimely sordid spaciousness. This isn't Beverly Hills or Malibu, but the L.A. that needs the police, with its miles and miles of iron gates, gangbangers and liquor stores baking beneath indifferent palm trees. The only things missing are the average residents. In Ayer's world it's only cops and perps, which occasionally gives the film the hollow feel of a realistic video game.

Officer Taylor is filming a lot of this material himself, for a college film class. He and Zavala attach clip-on cameras to their shirts when they go out on patrol, and Taylor shoves a camcorder in his colleagues' faces during moments of fraternitylike goofing. In its shot-by-the-actual-characters approach, "End of Watch" is similar to films such as "Cloverfield," and like many of those films, cheats by alternating handheld "footage" with traditional camerawork. What once was a trend now is common. While it could be argued that audience awareness of this technique makes its use acceptable, the distracting switches between first- and third-person points of view make you wonder if the film really needed the film-class conceit in order to achieve the desired effect.

The film's plot raises similar questions. When "End of Watch" focuses on Taylor and Zavala at work it approaches greatness, lessened first by a severely miscast Anna Kendrick as Gyllenhaal's love interest — the arrival of this flimsy "Twilight" actress in an ultra-realistic police drama is beyond jarring — and finally by a third-act plot contrivance involving a scary Mexican drug cartel. Unfortunately, the simple enjoyment (if you can call it that) of seeing heart-pounding life in the LAPD must share time with domestic scenes between Kendrick and Gyllenhaal, and a somewhat ludicrous sequence from the point of view of cartel hirelings, who just happen to be making their own amateur movie. Do they go to officer Taylor's college? Is the final film the result of a collaborative project? (R) 109 min. S