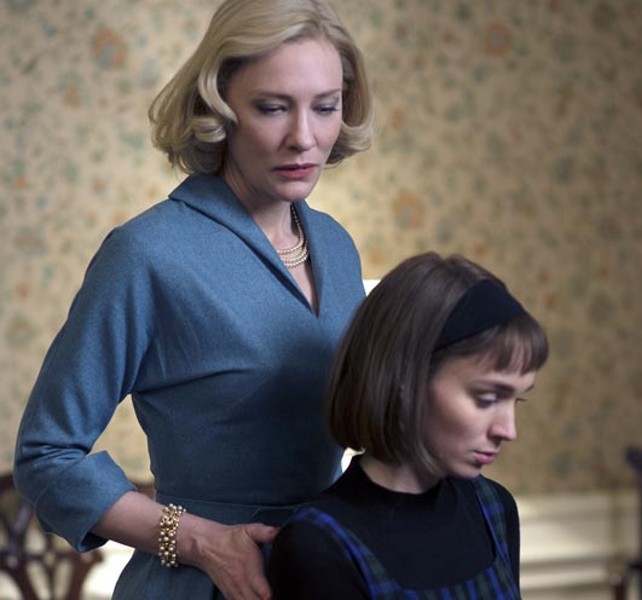 I don’t know if Rooney Mara will ever be the actress that Cate Blanchett is, but she has undeniable screen presence, an enigmatic quality. It helps her tremendously in “Carol,” a May-December romance between two women during the 1950s.

An inscrutable surface beauty has served Mara well when required to keep silent and mysterious, effective in films like Steven Soderbergh’s “Side Effects.” She’s best when she stays buttoned up, as she does in “Carol,” underscoring the grimly conformist atmosphere that haunts the film’s central love story.

Mara plays Therese Belivet, a mousy New York shop girl at a department store in 1951 who, when pushed on the topic of marriage, asks her pseudo-fiance (Jake Lacy) if he can imagine two boys falling in love. There’s a reason for her question, and it isn’t because she suspects him. Therese has recently met Carol Aird (Blanchett), a society woman having marital troubles caused by what her husband (Kyle Chandler) contends is immoral behavior. Carol likes other women. She likes Therese. She invites her to lunch, and then to dinner, and then to a road trip across the country which invites all kinds of trouble along the way.

“Carol” is adapted by director Todd Haynes from Patricia Highsmith’s novel “The Price of Salt.” For the maker of “Far from Heaven” this is another film exploring midcentury life. “Carol,” thankfully, is a much more mature, nuanced work. Haynes smartly doesn’t focus too intently either on homosexuality or its scandal during that period. That the decade was close-minded about the topic, to say the least, is a given in this telling. And though the feeling of the era’s notorious culture of conformity is always present, it isn’t the film’s only theme, which would have seemed a little dated and trite. American life in “Carol” is set in a distinct time, but it also attempts to be timeless.

One of the most impressive facets is its production design, which alone could be considered a reason to see it. Advances in new cinematic tools and techniques allow filmmakers to create virtually any look they want, which is especially important when they have the talent to create something distinctive. “Carol” looks 1950s, but not in the way of a contemporary period drama, and not like the films made at the time (the way Haynes went with “Far from Heaven”). It looks more like actual 1950s footage, creating an antique, saturated palette and grainy texture that vie with each other for prominence and depth. The result is often achingly beautiful.

It does more than convey rapturous images, however, or even create a sense of time and place — though it does that as well. The film’s look also creates a sense of transience, of longing and regret, of nostalgia and hope, all intermingling. “Carol” captures that transience without spelling it out in dialogue. It imbues itself with a sense that something important is disappearing just as it unfolds, like scenes through the window of a speeding car. Haynes leans on this idea of window gazing a little too often, but mostly it’s effective shorthand for life’s most important moments racing by, fastest and most out of reach.

The only thing that holds “Carol” back a little is Mara, though only in the movie’s later portions. Her character’s inward, contemplative aura is fitting when we first meet her, but it grows increasingly limited as, in the film’s words, Therese “blossoms.” Yes, there are visible developments in her situation, but not so much in her characterization. Mara retains the same distant look in her eyes despite whatever is going on in Therese’s life. It’s a matter of range, and eventually comes at odds with the rest of the film. That isn’t a problem with Blanchett, who moves with grace and ease from steely formality to quivering earnestness, carrying the film’s most complicated scenes.

Love is a complex emotion. It’s debatable whether it’s real, and if it is real, what exactly it is. With the exceptions noted, “Carol” probes these complexities with beguiling artistry. The 1950s in “Carol” is neither candy-colored nor drab, neither rosy nor diabolical. It’s precariously balanced. Like the lives and loves of its characters, “Carol” is a mixture of positive and negative, an imperfect companion you long for anyway. (R) 118 min. S