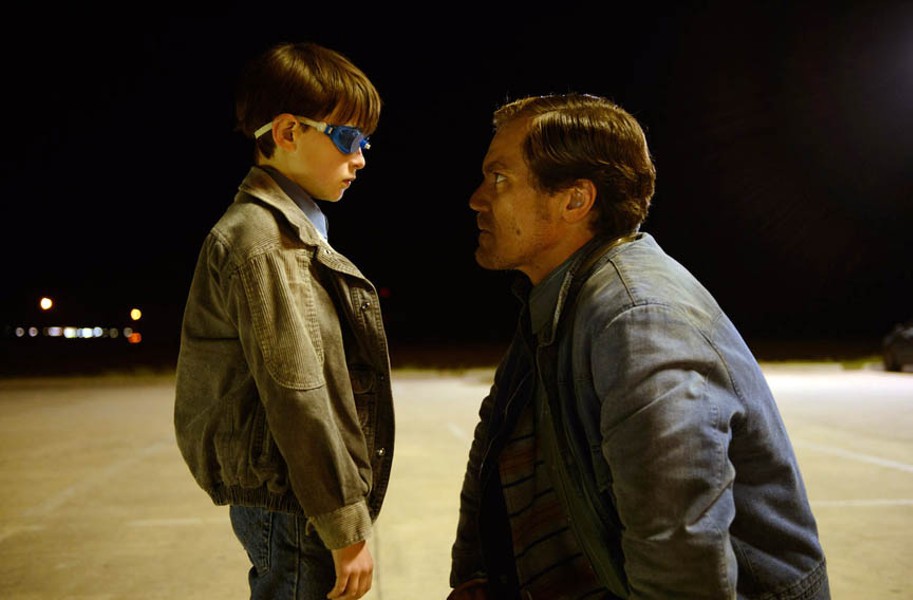 Warner Bros. Pictures The superherolike Alton (Jaeden Lieberher) gets a talking to from his prominent-jawed dad, Roy, played by Oscar-nominee Michael Shannon.

"Midnight Special” is about an unlikely person with supernatural powers, one who voraciously reads old comics but who would seem out of place in those pages.

His name is Alton. He wears blue swimming goggles and orange, firing-range-quality earmuffs, and must never be in direct contact with sunlight. We don’t know why, but by the grave look on everyone’s faces, really bad stuff could happen if he does.

Oh, and he’s in middle school. Or should be.

His father, Roy (Michael Shannon), abducted him from his adoptive father (Sam Shepard) to escape their Branch Davidian-like Texas community, where he was a prophet, pouring out numbers, phrases and languages, believed to be missives from God.

After we see Roy on the run with Alton and Lucas (Joel Edgerton), Roy’s buddy of curious origin, the government shows up, led by a furtive National Security Agency operative, Sevier (Adam Driver). Sevier claims that Alton’s messages are government secrets. He demands that Shepard and his flock produce the kid, but he’s too late. A chase ensues.

It’s weird as hell and just as much fun. “Midnight Special” is a hair shy of being a superhero origin story, but one that’s nothing like a Marvel or D.C. superhero movie, and all the better for it.

In creating Alton and his alternative universe, writer and director Jeff Nichols manage to meld something like a cross between “Close Encounters of the Third Kind” and “Starman,” while creating something different, something that feels new. You have a feeling that he won’t be able to sustain something so special without a few cracks appearing, without a misstep.

As Roy and Lucas race through the night in vehicles as varied as a Chevy Nova and a delivery van, “Midnight Special” veers ever closer to the precipice of camp. It’s always pulled back by a new reveal: some creepy, completely freaky thing that Alton does. But for all the gripping, mysterious suspense, the threat of absurdity lurks.

Sometimes it’s intentional and works. Alton performs a fantastic feat about halfway through the movie that demonstrates his colossal power, causing agent Sevier to gulp, “Well, that’s impressive.” It’s the kind of tongue-in-cheek one-liner delivered with a straight face but producing much laughter — intentionally, and without breaking the movie’s spell.

Other things are funny for reasons not as good. You wonder, for example, why a child so gifted as Alton, around 11 or 12, has no agency whatsoever, carried like a toddler, hidden under blankets, barely able to stop himself from killing everyone around him by accident.

It would be easy to cobble together a reason from the film’s mythology, but no need. At that halfway point, Alton pulls it together, becomes an unconditionally special adolescent, and “Midnight Special” seems to let out the long-awaited sigh it was holding in for far too long.

There’s only one other minor problem along for the ride, and that’s Driver, who’s no more threatening as an NSA agent than he was as the Sith Lord in the recent “Star Wars” sequel. One wishes Nichols, who last gave us the slow-churning but ominous Southern drama, “Mud,” had switched Driver with Shepard in the casting process. The decision seems obvious in hindsight. Driver could easily give a cult leader a high-pitched zeal that wouldn’t fit Shepard, and to be scary and authoritative, Shepard could merely stand there looking like Sam Shepard.

Beyond that missed opportunity, however, “Midnight Special” seems to race toward classic status from its midpoint, the chase increasing in intensity while making sharp turns you might not see coming. The only problem is the finale, and that will bother you only if way too much questionable computer-generated imagery bothers you. There were gasps from the audience during big reveals, and I couldn’t tell if they were impressed, or, like me, slightly embarrassed. Regardless, “Midnight Special” commits the common but thrill-killing sin of overreach. Movies should show, not tell, but not show too much.

“Take Shelter,” from 2011, is Nichols’ model film, the one he should have looked back to while writing this ending. “Take Shelter” maintains its mysterious ambiguity until the credits roll, while “Midnight Special” rolls out the red carpet of explanation. It didn’t have to go one way or the other, but being a little less literal and explicit would have served it well. Even a kid as powerful as Alton could blow our minds while leaving us something to think about. (PG-13) 111 min. S