Movie Review: "A Ghost Story" Explores What Happens When a Spirit Is Haunted by the Living 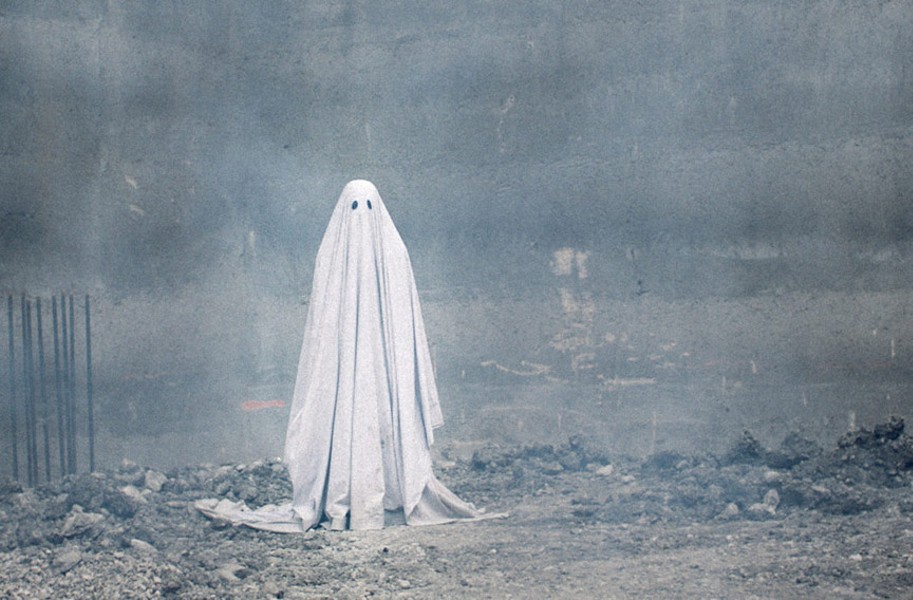 In the follow-up to his Oscar for best actor, Casey Affleck plays a dead guy in a sheet in the acclaimed and eerie new film by Dallas filmmaker David Lowery (“Ain’t Them Bodies Saints”).

The plainly descriptive movie title might be the norm these days, but it rarely tells the whole truth. “War for the Planet of the Apes,” “Wonder Woman” and the upcoming “Dunkirk” seem to summarize their content perfectly, but then you find out there’s more, whether it’s human armies, male sidekicks, helpful British subjects or just millions of dollars in special effects and locations.

By contrast, there’s decidedly less in “A Ghost Story,” which haunts its summer rivals with a minimal cast, one setting and a tiny fraction of the typical summer movie budget. There’s not much that the title doesn’t convey. One suggestion: an apostrophe. This is not a ghost story as much as it is the story of a ghost — a ghost’s story.

Movie stars Casey Affleck and Rooney Mara, are identified only as C. and M., in a tale as terse and truncated as their names: C. and M. share a rural home, C. works on his indie-rock music — we assume he’s a professional — M. nudges him a little with her desire to move somewhere else.

That’s almost all the conventional narrative we get, as well as all of the principal actors we get, because immediately after these tidbits are revealed, C. dies in a car accident. The music and the couple’s dreams die, too. All that’s left is C.’s ghost, in a sheet, with eyeholes like a Halloween ghost. He returns to the house to watch M. somberly pack up and move on. And that’s one of his more action-packed evenings.

As you might have guessed, “A Ghost Story” is not a horror film. Even the seemingly obligatory jump scares and the ghost’s minor acts of violence are unusual. When someone pounds on a window unexpectedly or breaks through a door, it’s the ghost who jumps. His situation is supposed to unnerve us as we struggle to understand why he’s there — or what’s going to happen next. It’s the supernatural turned on its head — a spirit haunted by the living.

This theme continues as the years, and eventually centuries, accumulate. First a family moves in — then quickly moves out when the son can sense the ghost. They’re followed by a group of partying roommates and finally contractors who want to tear down the house and erect a sky-high corporate center on top of the rubble.

Director David Lowery artfully introduces these intrusions by repeatedly presenting them from the perspective of the ghost who outlives them all. Time becomes fluid. Days seem like years. Years seem like blinks of an eye. A bedroom door closes on one decade, and opens onto another.

That it’s all very tree-of-life is one criticism that can be leveled at the film. Lowery also borrows frequently from the style and pacing of familiar movies and directors, especially Terrence Malick. For more evidence about that, see “Ain’t Them Bodies Saints” from 2013, Lowery’s homage to Malick’s “Badlands” and “Days of Heaven.” But there also are plenty of other moments that strike one as inspired-by.

Sometimes this tendency makes “A Ghost Story” seem whimsical, or, less kindly, uneven. Two moments are particularly vexing. When our ghost sees another in the house next door, they wave and communicate in subtitles. Not too much later, one of the roommates, well-known indie musician Will Oldham, gives a stoner soliloquy about the end of the universe. Both instances feel too cutesy for the movie’s good.

A pie-eating scene by M., already extensively reported, emerges from what feels like a completely different sensibility. The camera barely moves as she sourly scoops chunks of apple and crust to her mouth. The ghost stands there observing, as does the audience, for the entire binge. But observing what? Thinking what?

Most films about death, even ones involving ghosts, take the point of view of those left behind. Olivier Assayas’s recent “Personal Shopper,” weird in its own ways, is a good example. “A Ghost Story” takes the perspective of the dead, one that remains rather opaque.

This unconventional point of view is amplified by its framing — in a square with rounded corners, like an enormous iPhone button — which in turn draws attention to moments that tone down narrative in favor of reflection. “A Ghost Story” doesn’t say all that much and invites its audience to chime in, like a gently manipulative art film meant to be felt and interpreted. All thoughts, memories and feelings about death are welcome. It’s a ghost’s story, but is open to anyone else’s. (R) 92 min. S