An acclaimed choreographer explores homelessness in a masterpiece work at VCU Dance. 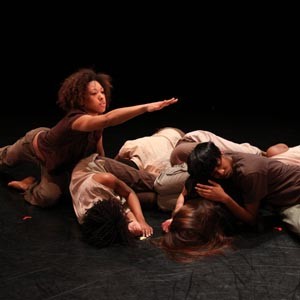 With a grant from the National Endowment for the Arts, the Virginia Commonwealth University dance department will restage revered choreographer Jawole Willa Jo Zollar's “Shelter” for a performance at its annual Now concert. “It is a masterpiece work,” says James Frazier, chairman of the department.

It's the second time in four years that the department has received funding from the endowment, and this year it comes from an American Masterpieces grant. “It's not easy to get money from the NEA,” Frazier says. “They gave us an affirmation by supporting us, certainly.”

“Shelter,” which Zollar first choreographed in 1988, deals with the issue of homelessness. The work to be performed in Richmond is the New Orleans version, revised to reflect the aftermath of Hurricane Katrina.

“I was really interested, particularly in ‘Shelter,' in exploring that very rough-hewn sense of movement that comes from a very deep place of life,” says Zollar, who's known for her powerful combination of dramatic elements such as text, percussion and singing in her choreography. “I think the work came out of a desire to explore a certain kind of physicality and athleticism that's not about pretty,” she says. “I'm interested in exploring the emotionality of how people move, and not the refinement.”

Zollar founded the Brooklyn-based dance company Urban Bush Women in 1984 and serves as its artistic director. “I wanted to reflect the women I had grown up around in a multidimensional way and not in a set of stereotypes,” she says of her intention behind the company. “That and I wanted to work with the folklore and traditions and culture of African Americans and the diaspora.”

Members of Urban Bush Women, including VCU alumna Samantha Speis, came to Richmond in the fall to restage “Shelter” with the dance students who will perform the work. Zollar also visited in January, giving students the valuable experience of working with an award-winning choreographer.

“Jawole Zollar is a big deal,” Frazier says. “And ‘Shelter' is an exciting work and I think it's timely. A key component of the Urban Bush Women aesthetic is struggle. There's always the power of overcoming circumstances and rising up.”

“I want for the audience to think about homelessness and what that means and how vulnerable we all are,” Zollar says. “Maybe have compassion for those who find themselves in that situation whether it's through something like Katrina, or addiction or loss of job. I'd like for the bankers who are doing all the foreclosures to see this piece.” S

“Shelter” will be performed at Grace Street Theater as part of the VCU Dance Now concert on Feb. 17, 18 and 19 at 8 p.m. Tickets are available online at showclix.com or by calling 828-2020. Information at blog.vcu.edu/dance.