Moveable Feast: What We Ate and Drank in Richmond in 2016

I get exhausted just thinking about 2016. And I’m not even including politics. The Richmond dining scene is an energetic, even superhumanly strong hot bed of action — and covering it is mostly a sprint.

There were quick turnarounds. One minute we were happily dining and the next minute poof the restaurant was gone. Fortunately, plenty of others sprang up to compensate. Chefs traded places, as that restless breed always does, and menu changes — seasonal and otherwise — became the norm.

But it was the excellence of Richmond’s food and drink scene that seemed to remain the hottest topic of conversation. Here are a few highlights of the year:

Up in the air: It was the year Richmonders looked up. Spectacular views were all the rage, and Quirk Hotel was first to open its rooftop bar. The Hofheimer Building soon followed with a weekly pop-up series called Sunsets at the Hof, and Kabana Rooftop was the only one to open with a full-service restaurant attached, as well as live music and cocktails on the deck.

Deja vu: Restaurants had lots of moves last year — and this year was no different. La Grotta set up shop in the Miller & Rhoads building, Early Bird Biscuit Co. moved into the Fan from Lakeside, a Peach in a Pear Tree closed in the West End and reopened on South Side, and the farmers took over Byrd House Market when the William Byrd Community House shut down and opened for the 2016 season on Randolph Street.

Secco Wine Bar, after closing its Carytown location, opened in the old Buddy’s spot with a new cocktail program. Urban Farmhouse Market & Café closed its Church Hill location and moved it to nearby Rocketts Landing. Idle Hands Bakery opened in Scott’s Addition, immediately ran out of room and moved to Jackson Ward.

Although it’s not a restaurant, Blue Bee Cider left Manchester for bigger digs in Scott’s Addition. And finally, after 90 years, the venerable Sally Bell’s Kitchen moved from its Grace Street home to Broad Street, with — gasp —places to sit down. 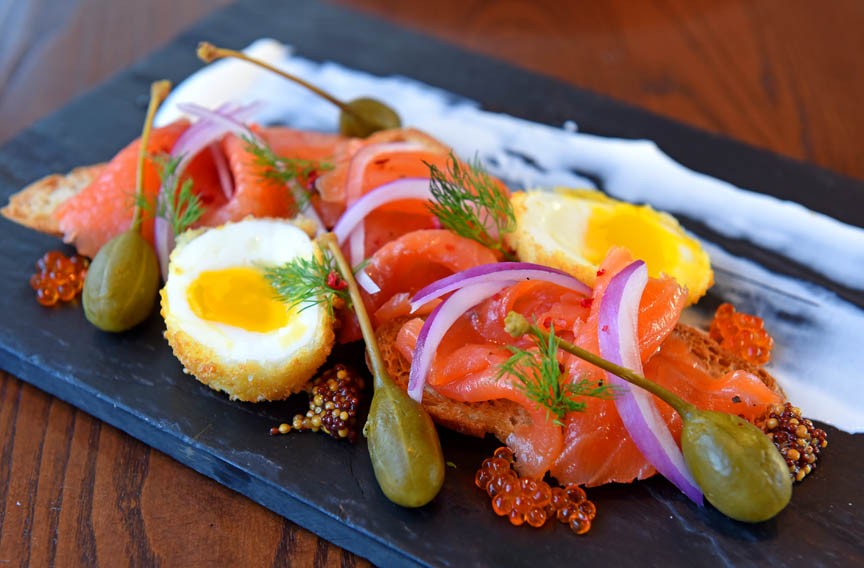 Metamorphoses: Name changing and concept transformations abounded. Caliente became the more family-friendly Shepard Street Tavern, although its stupid hot wings remained on the menu. Nota Bene wiped away the memory of Pizza Tonight, and diners finally noticed that seafood and pasta were its real focus.

Union Table & Tap, formerly the Union Tavern, remade itself into something more enticing to families, and the Water Grill changed into East Coast Provisions, with a new interior and a different, although still seafood-focused, menu. Kanoa Latin Cuisine became Alero Mexican Restaurant.

Although Antler & Finn was a grand experiment in the old Belvidere on Broad space, it soon became a sibling to Patrick Harris’ Boka Tako projects as Boka Tavern. Coffee shop Shore Dog Café started offering a full dinner menu, and Mediterranean grill Lucca Enoteca on East Grace Street was transformed into a second location of the acclaimed Maya Mexican.

Buskey Cider — although not a brewery — started pouring in Scott’s Addition, while Center of the Universe Brewing Co. opened a taphouse, Origin Beer Lab, in downtown Ashland. Triple Crossing Brewing Co. opened a second location in Fulton, and, of course, the big daddy of them all, Stone Brewing, finally opened at Rocketts Landing.

Grocery madness: Wegmans arrived in the area, with one store in Midlothian and one in Short Pump. Was it all that we’d dreamed of? Oh, yes, Richmonders said, yes indeed. Publix, a Florida-based, employee-owned grocer, announced that it was building a store in Glen Allen, and before the news could be properly digested, bought 10 stores from the failing Martin’s chain and announced that they would reopen, after renovation, as the company’s very own.

Ellwood Thompson’s Local Market built the Beet Café in its community room with wine and beer happy hours, in addition to the Create bar with sandwiches, bowls and breakfast items. Whole Foods gutted the center of its store and threw in a long bar with nearly 50 taps and a seating area. Kroger thought about buying the Fresh Market, but changed its mind, and the chain was snapped up by a private equity group instead.

The unlikely specialty grocery, Southern Season, imploded, leaving only its Chapel Hill store standing among the wreckage. Its Richmond store was part of the collapse, and when it closed at Libbie Mill Midtown there was a spectacular going-out-of-business sale.

One more time: Established restaurant owners added to their portfolios again this year. Thrillingly, Peter Chang opened his eponymous flagship restaurant in the city on West Broad Street, and Kendra Feather opened Laura Lee’s in the old White Horse Tavern space on the South Side.

Eat Restaurant Partners opened both Boulevard Burger & Brew across from Bowtie Cinema’s Movieland and Mexican-Asian fusion Wong Gonzalez on East Grace Street. Urban Farmhouse Market & Café opened a spot in Manchester and then closed it before the end of the year. Rappahannock’s mini-me, Rapp Session, opened next door, and Dutch & Co. began serving house-made hot dogs and sausages at Stroops Heroic Dogs down the street.

Food truck Goatocado put on its big-boy pants and opened a restaurant on Main Street. Burger Bach opened two more locations. The folks behind the Mill on MacArthur ran a contest for its latest restaurant’s name, and Liberty Public House, in the East End Theater building, added another option for Church Hill. Shyndigz made everyone happy when it opened the Fancy Biscuit on West Cary Street.

New beginnings: Critically acclaimed chef Walter Bundy took the leap and left his longtime gig at Lemaire. With the unlikely name of Shagbark, his restaurant at Libbie Mill Midtown unleashed Bundy’s pent-up creativity. When it opened, all of its tables were immediately booked.

The Streetcar Cafe opened on Brookland Park Boulevard but closed before the year’s end. Kinsfolk opened and began serving a well-reviewed menu but also shut its doors recently. Chef Michael Hall came back to the spotlight, opening the Southern-inflected Spoonbread in the former Fan House on Floyd Avenue.