Worm farmer Caleb Johnson has the answer for your disposal needs. 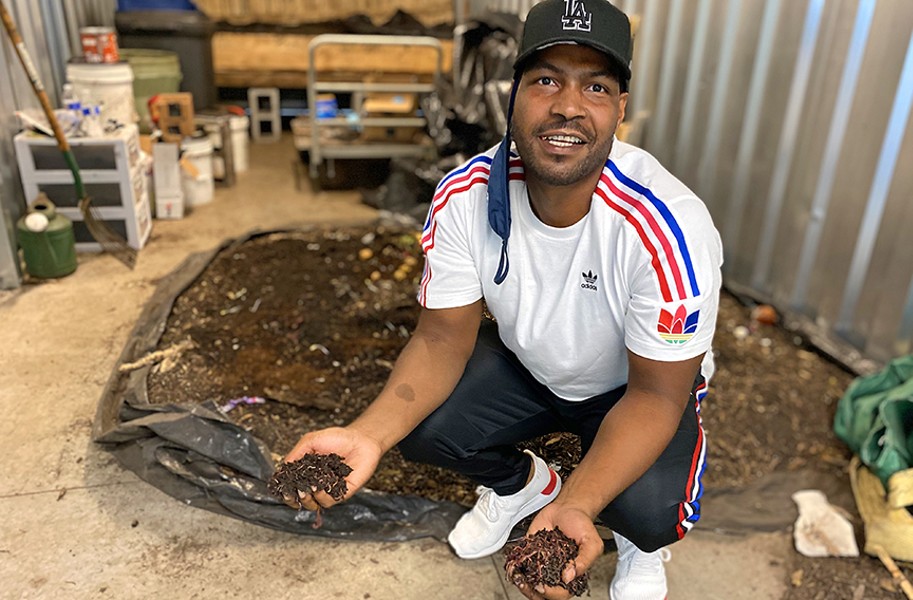 Scott Elmquist Permies Worms owner Caleb Johnson just sold 25,000 worms to a vineyard in Maryland. He learned about composting with worms in a permaculture class from an ad he saw in Style Weekly.

“These guys are definitely the most valuable,” says Permies Worms owner Caleb Johnson, flicking over the orange shell of a decaying pumpkin to reveal hundreds of tiny, blood-red worms.

Eisenia fetida, aka red wigglers, are king composters, thriving in environments rich with rotting vegetation, compost and manure. Upwards of 40,000 red wigglers squirm across the faux forest floor Johnson has created in a temperature-controlled storage unit, feasting on decomposed trees, sticks and food scraps Johnson receives from his family. They’re vegetarians, he notes, and have a fondness for “any kind of melon.”

The creepy crawlers would elicit shrieks from most, but Johnson is perfectly at home knocking around in the soil.

“This is a kid thing for me,” he laughs. “It reminds of me playing in the dirt at my grandma’s house. Oddly enough, everything came full circle.”

Three years ago, Johnson was a bit unmoored, not sure what his future held. He knew it would not include sitting down and pushing papers at a traditional 9 to 5, “that’s not my style.”

One day, while flipping through his favorite Richmond alt-weekly, he spied an ad in Style for a permaculture class. “If I didn’t see that, I wouldn’t be here,” he says, smiling and spreading his arms wide over mounds of dirt and plastic crates containing his other worm specialty, nightcrawlers.

After completing the two-month permaculture course, one of Johnson’s teachers told him, “If I were you, I’d get into worms.” Johnson was intrigued by vermicomposting, which is composting with worms, and soon was entranced by these tiny, spineless farmers. “I saw all the benefits of worms and how we’re not using them enough,” he says.

So in 2018 the fledgling farmer decided to pursue his newfound passion, and placed an order for red wigglers from “the Coca-Cola” of worm farms, Uncle Jim’s. At any given time, Johnson says, his humble farm can house a few hundred thousand worms.

The worm market, it seems, is unaffected by the pandemic. Because the orders keep rolling in.

“A lot of people in the area reached out to me because I was selling the castings,” Johnson says. Red wigglers do not have teeth, instead digesting food with their muscular gizzards, which grind small food particles with a material like sand or topsoil. Their food waste is then used to create a nutrient-rich compost called castings.

Johnson sells his worms in orders of half-pounds, starting at $25 for about 500 worms. He just completed his biggest order to date, sending 25,000 worms to a vineyard in Maryland. In addition to being low-maintenance critters, worms also ship well. Johnson, who also works as a driver for Three Notch’d Brewing, hopes that folks in the food and beverage industry will also explore the benefits of vermicomposting.

“I’ll be in the receiving areas of grocery stores and see all this trash – but it’s not trash, it’s really food. And here is a place for it,” Johnson says. He plans to expand his farm to a larger warehouse soon, where he will really be able to break down waste with his army of wigglers.

“Worms are awesome,” Johnson says. “If you see a worm in your lawn that is a sign that things are healthy, and it means you don’t have to till your lawn. At the end of the day that’s where we come from, and that’s where we’ll go.”