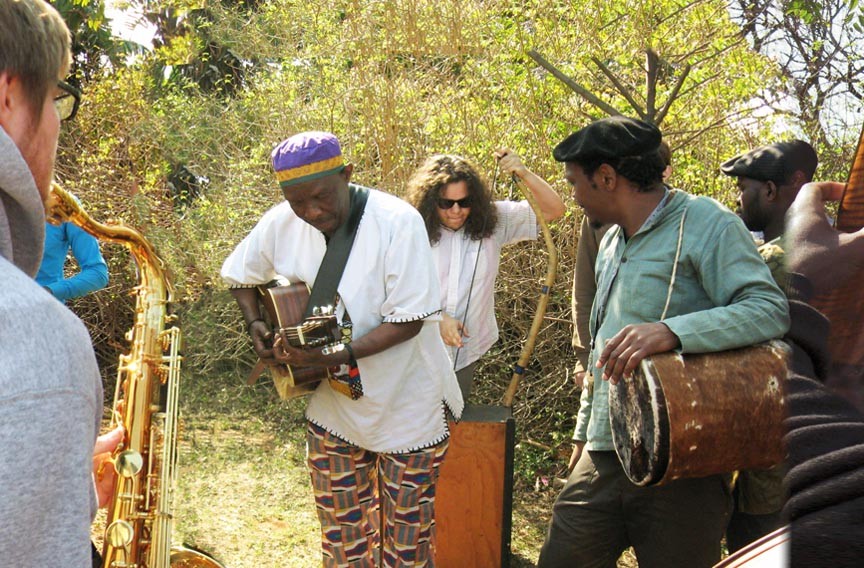 For a week last December, visiting students from the University of KwaZulu-Natal refracted brilliant musical improvisation through a South African lens. Through a series of formal and informal gigs, they brought new music from their homeland and a fresh, rhythmic conception to classic American post-bop jazz. It was one of the highlights of the year — and it's about to happen again.

The return is the culmination of a project 15 years in the making. In 1997, the International Association of Jazz Educators' journal ran a cover story by pianist Darius Brubeck (son of jazz legend Dave Brubeck) about the interracial jazz program he'd founded in the early '80s at the university in Durban, South Africa, the epicenter of apartheid. The so-called Durban system of passes and racial exclusion was the model for the country's benighted segregation policies. The optimism and artistic freedom unleashed in the '90s by free elections and apartheid's end was a subtext to the Brubeck's story.

The country's energetic affinity for jazz inspired the journal's then-editor, Antonio Garcia, now head of the Virginia Commonwealth University jazz studies program. He visited South Africa for the first time in 2002, and put together two $50,000 grants to fund this exchange a decade later. The program — two sets of exchanges of six students each from VCU and UKZN — culminates in two concerts. The first took place in Durban on March 6; the final one is March 28 in Richmond. The program, including new commissions from students and faculty at both institutions, is being recorded live for a future CD release.

"When we first got the music in January, neither could play the other's music for 10 seconds without stopping," Garcia says. "We use the same sheet music and notations, but we don't do the same thing." The harmonies were shared, but the fundamental beat, the play of cross-rhythms, is vexingly different.

The challenge cuts both ways. "It's a feeling thing," South African drummer Sphelelo Lelo Mazibuko says. "In American jazz the swing is much more forward, in Africa much more laid back." The improvisational music of South Africa embraces both a sophisticated affinity for jazz traditions and a deep historic reservoir of sophisticated folk and tribal creativity.

During their second visit, Garcia took the VCU students to a game preserve for a brief glimpse into music's organic roots. "For a musician to get out into Africa," he says, "and to hear birds that sound like claves, the rustling of leaves that sound like a rain stick, animals that sound like brass. ... It's transformative. This is where it all started."

On their last visit here, the South African students experienced the bustling urban half of the equation. "The nightlife in Richmond is much different," Mazibuko says. "There are so many clubs, the jazz scene is much busier than Durban."

Despite the differences, or perhaps because of them, the South Africans fit right in. The instant, joyous camaraderie of the young players from both sides is reflected in the title of the piece Garcia composed for the concerts "Reunion: Brothers from Another Mother."

With the March 28 concert — and recording — looming, there may be less free time for the visitors to enrich the club scene. The formal concert promises to be one of the year's memorable events. The best time to see them in the informal wild may be at VCU trumpeter and exchange program participant Victor Haskins' two-day CD release party at Bogart's (see this week's Set List, page 38). S

VCU Jazz Combo and the University of KwaZulu-Natal Jazz Legacy Ensemble present a joint concert in Vlahcevic Concert Hall, Singleton Center. Admission is $7 in advance; $10 at the door, free with a university student ID. The Victor Haskins CD Release Party is March 26 (no cover) and March 27 ($5).