The Basement, TheatreLab’s space in the arts district, is as malleable as the face of a Hollywood plastic surgeon’s trophy wife.

During “Hedwig and the Angry Inch” it became a dingy subterranean nightclub for the oversized talents of a gender-queer entertainer. For “Venus in Furs” it morphed into a director’s low-rent office complete with casting couch.

“When we first walked in we knew the place had potential,” the founding artistic director, Deejay Gray, says, “but what we didn’t know was that we wouldn’t duplicate a staging configuration after two full seasons of shows and events.”

That’s two years’ worth of seeing shows in completely unique ways — probably a first for Richmond theater. During Lip Sync RVA events, the space at 300 W. Broad St. is nothing more than background for some of the biggest hams in town. 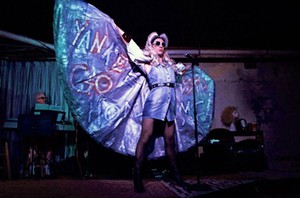 “We pride ourselves on the unexpected and evocative nature of our programming,” Gray says, “and the Basement really lends itself to creating a thrilling experience for our audiences every single time they come down to see us.”

Loaned out to Quill Theatre for David Mamet’s “American Buffalo,” the space was transformed into a cluttered junk shop, complete with baby carriage, snowshoes and volumes of the Encyclopedia Britannica on the floor under lampshades and tennis rackets hung from the ceiling. Most items were available for sale after the play’s run, making for theater as pop-up thrift store.

Is there anything this basement can’t be?