Most Public Endorsement of a Presidential Candidate by a Basketball Coach 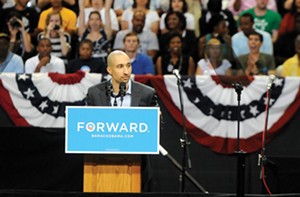 After two straight trips to the NCAA tournament (and a Final Four appearance) Virginia Commonwealth University basketball coach Shaka Smart is about as big time as it gets in Richmond. But maybe it’s time to scale it back, coach. It isn’t because you endorsed Barack Obama at his re-election rally at the Siegel Center — which we recognize is truly big time for a basketball coach. It’s that you claimed to be there as a private citizen. You were on a stage at the Siegel Center. Obama referred to you as coach. And your own staff sent out a news release announcing the event.