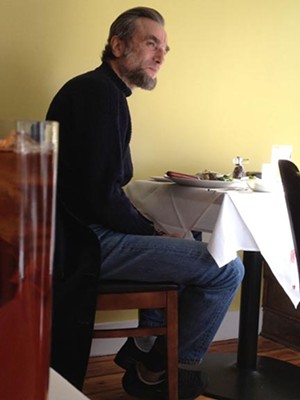 For a former history student at the University of Virginia, it was the moment of a lifetime. Michael Phillips was having lunch with a friend at Arcadia, the newly opened restaurant in Shockoe Bottom, on Nov. 30. As soon as they sat down, Phillips looked up — "and of course there's Daniel Day-Lewis, looking a lot like Lincoln."

Using his phone, he snapped a surreptitious photo of the pensive actor — in town filming Spielberg's "Lincoln" movie — and tweeted it to friends. "I didn't think it was anything that special," says Phillips, who'd run into Day-Lewis before at the Hill Café.

He was wrong. Within an hour, the shot had gone viral, first appearing in local media and then finding its way to US Weekly, the Huffington Post and television news networks. Phillips stayed up all night taking calls, and helped keep the buzz going.

It was "probably the craziest thing that's ever happened to me," Phillips says. The news cycle soon turned over and the attention stopped. But there's a legacy, he says: "People are going to Arcadia and asking if they can sit at the Lincoln table."