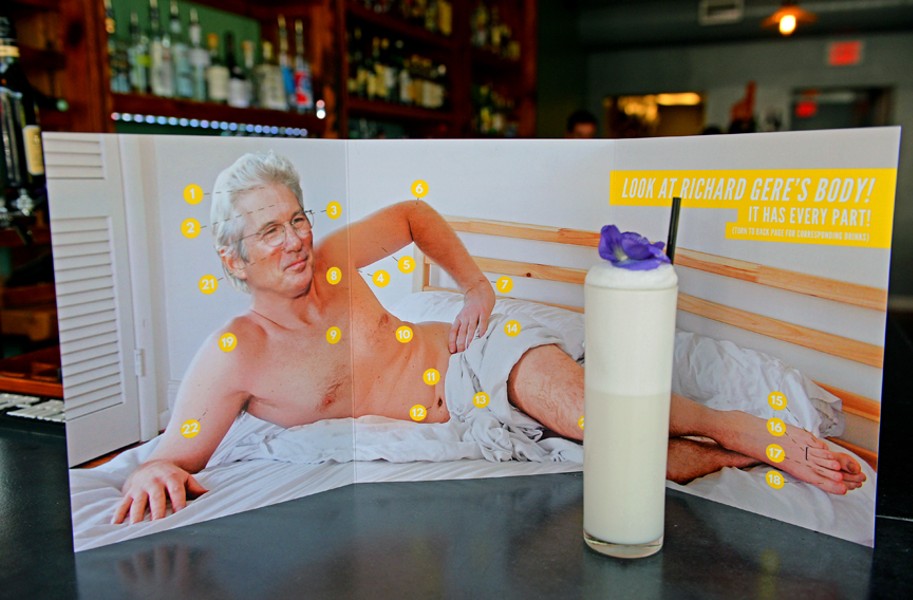 Since opening in early 2014, the Rogue Gentlemen and owner John Maher have been anything but under the radar. The bar program is a particular bright spot, with an ever-changing quarterly and seasonal drink menu that’s evolved from a sheet of paper to a quirky, fanciful book, to an absurd and highly entertaining cocktail magazine. How many restaurants are bold enough to successfully pull off a Richard Gere body-part-themed cocktail menu?

Style: What motivated you to create these kinds of cocktail menus?

Maher: My motivation to do these different seasonal menus is just based off of our main driving force — and that is to be different. Anyone can print off words on a piece of paper. To me, sitting down at a bar and being handed something that clearly took a lot of time and effort and money to produce just stands out. Our cocktail menus are the guest’s first interaction. I want it to blow their minds.

Where did this Richard Gere idea come from?

After two seasons of pretty hardcore-cocktail-nerd bound books, I knew for the spring edition I wanted to do something really fun and ridiculous. I had the idea of doing a magazine based off of those awful teen heartthrob mags like Tiger Beat. During our menu meeting, we were making fun of Richard Gere for some reason and it kind of went from there. I wanted to convey that yes, we do take cocktails very seriously, but that we don’t take ourselves seriously at all.

How have your patrons reacted to it?

Guest reactions are priceless. I’m pretty sure we have the most photographed menu in the area. People are taking pictures with the menu, and not just of it. Which is pretty cool.

What’s the link between the body parts and drinks?

As bartenders, we wanted to keep our original drink names. So we ended up using both. I gave them the drinks and our names, and my bartenders chose which body part to attach it to. “Garden Snake” was obvious.

Which part stumped you the most?

“Richard Gere’s Water Testing Toe.” … I didn’t even know that was a thing.

What’s your favorite part to drink?