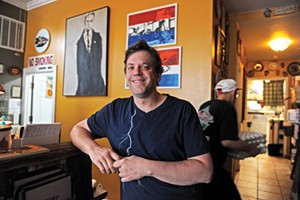 Kevin Roberts, chef and owner of the Black Sheep, earned a degree in painting and printmaking from Virginia Commonwealth University, focusing on lithography and digital media. In the restaurant he shows his reinterpretations of American idioms in red, white and blue, a complement to his American cooking.

Andy Howell (formerly of Cafe Rustica) is a hair away from a degree in creative writing from VCU. Who has some pull over there right now? Who can get this done? Hey Shaka, how do you feel about rich, made-to-order oyster stew?

Ellie Basch (Lunch Porter) earned a bachelor’s degree in literary studies from Beloit College in Wisconsin. Those Buccaneers had no idea there was an award-winning chef in their midst — she could have worked wonders with ramen.

Bill Foster (formerly of Zed and the Boathouse) has a degree in criminal justice from the University of Tennessee at Chattanooga. But that’s not why we take him seriously.

Walter Bundy (Lemaire) graduated with a bachelor’s degree in psychology from Hampden-Sydney College. His Theta Chi brethren might suggest a table visit and that secret handshake.

Tim Bereika (Secco) has a degree in communication arts and design from VCU — which still shows up in the care he takes constructing plates of food.