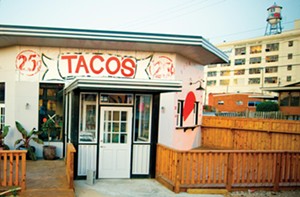 When it was announced in late 2011 that the dowdy Tri-Angle adult bookstore on North Boulevard near Broad would become a taqueria, Richmonders greeted the news with excitement — and plenty of jokes about bleach. Now En Su Boca is set to open in late May, says Eric Stangarone, a partner in the restaurant with Bellytimber owners Randy O'Dell and Patrick Stamper, and the transformation's about to be revealed.

"The more layers that we peeled away from the space, the more interesting it actually got," Stangarone says. Contractors uncovered two striking garage doors and an old-timey painted sign advertising 25-cent movies. The sign has been incorporated into the restaurant design, as "a bit of an homage to the old space," Stangarone says. However, he notes, "We're definitely not going to be selling a lot of food for 25 cents."