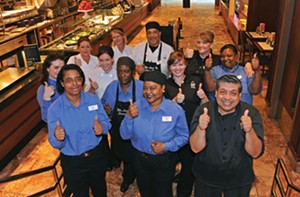 In Richmond, the Arby's chain has become something more than a cowboy-hat sign and heaps o' roast beef. Credit the Ripp family, whose brand, the Restaurant Co., seeks to make its 19 Arby's locations just a little better than you expect.

The Arby's in Colonial Heights, billed as the world's largest, has a whole menu of Mexican food. The one in Short Pump looks like a Northwest lodge and sells barbacoa barbecue and beer.

But there's one that, for sheer weirdness and warmness, steals our hearts. Walk into the Arby's that's tucked into the James Center on East Cary Street, shown here, and you feel like you're stepping into 1979. Maybe it's the brass rails and salmon marble tiles. Maybe it's the funky neon floral sculpture, or the lava-rock mobile dangling from the ceiling. Or the fanciful carved rugs on the walls — all 1970s Burt Groedel for Edward Fields pieces from Richard Ripp's private collection (and easily worth several thousand dollars).

More than the décor, we love the James Center Arby's employees — many of whom have worked for the Ripps for 20-plus years. Whether you order rotisserie chicken or a jamocha shake, they'll call you "sweetheart" and make you feel like you're home.