Three new apartment buildings signal a possible turnaround in the city's South side. 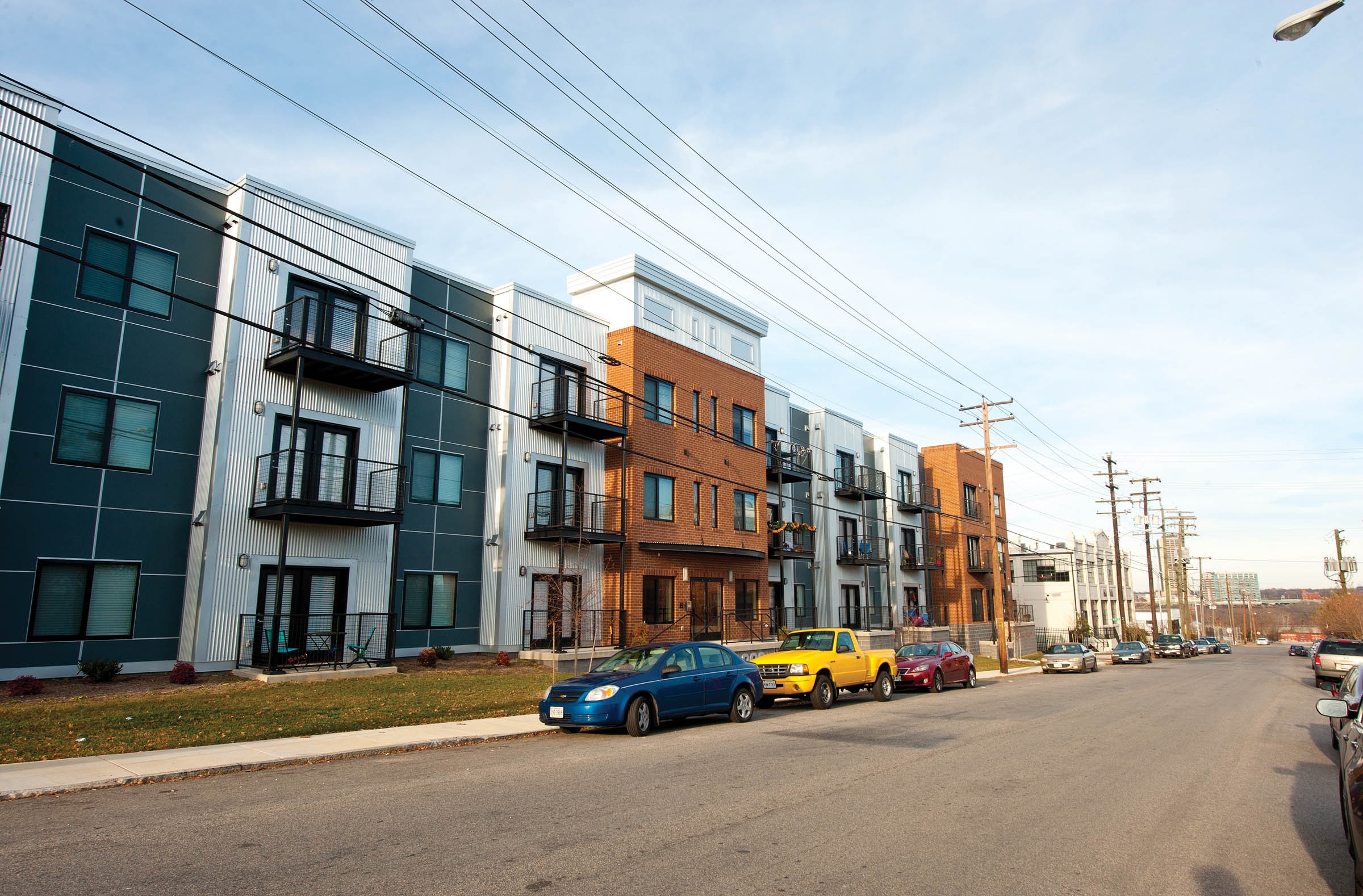 For a snapshot of the once and future Manchester: Stand in the middle of the partly vacant block bounded by Hull, Bainbridge, 10th and 11th streets, and turn 360 degrees.

Fronting 10th Street is a former stable, weathered brick walls and rough-hewn wooden doors hearkening to when Hull was the bustling thoroughfare of Manchester, initially a tobacco port. The city merged with Richmond in 1910, just as automobiles were transforming how American cities would function.

Opposite, on 11th Street, is a forlorn-looking, modest frame dwelling. Easily 125 years old and showing its age, it remains occupied.

On the Hull Street side of the block is a former post office, an elegant beaux-arts structure reflecting the ebullient dawn of the American century. Now restored through financing using preservation tax credits, it awaits a tenant.

Finally, on the west, you see the rear of a new, broad-shouldered, three-story apartment building named 1000 Bainbridge. Although this residential complex is so clunky in massing and poorly detailed it makes me wince, I'll get over it. The building, filling in an entire half block and providing needed affordable housing, is a welcome step in repopulating a neighborhood that hardly could have been described as such during the past 35 years.

Much of Manchester's building stock, particularly in the once-attractive residential area west of Hull Street, was decimated in the 1960s and '70s. The redevelopment that was envisioned didn't occur. All that remained was a historic grid with wide streets and intact granite curbing. It easily could have been mistaken for Detroit, Cleveland, or any city where demolition was seen as a panacea to urban ills. Ouch. Virginians may consider themselves enlightened preservationists, but they were asleep at the wheel here. Nobody shared the love with South Richmond: It was too industrial and too culturally and socially removed from the political, professional and educational forces north of the James River.

Years ago, when I suggested to a prominent preservationist that he give Manchester a look, he responded, "Don't make me go there." He meant it both literally and intellectually.

Well ... folks are going there now. The residential population downtown, of which Manchester is a part, has doubled since 2000 from 5,000 to more than 10,000. And much of that growth is in Manchester — the pioneers are mostly young professionals and empty nesters. Many of them live in transformed warehouses and large, newly constructed apartment houses. If three of the latter, including 1000 Bainbridge, aren't architecturally distinguished, they are proof positive that things have turned around. And it signals that possibilities for reuse of existing building stock have been exhausted and that ground-up construction is economically feasible.

The most prominent of the three sizable complexes is the Link Apartments Manchester at 901 McDonough St. The U-shaped building occupies its entire block and sits hard against ramps to the Manchester Bridge and directly across Semmes Avenue from the sprawling SunTrust operations campus.

On the Semmes side, the building establishes a solid and much-needed urban wall as it rises five stories on the Ninth Street side and four stories on the uphill, 10th Street side. The building's mass is broken by a variety of well-chosen materials and colors. There's concrete gray block, ochre wooden siding and red brick. Ground level units opening onto Semmes have front stoops, suggesting sidewalk life might again take hold in this barren stretch of cityscape.

The opening of the building's U fronts McDonough Street and embraces a good-sized swimming pool — and come spring, a community garden. Parking is mostly hidden, on the building's lower level. 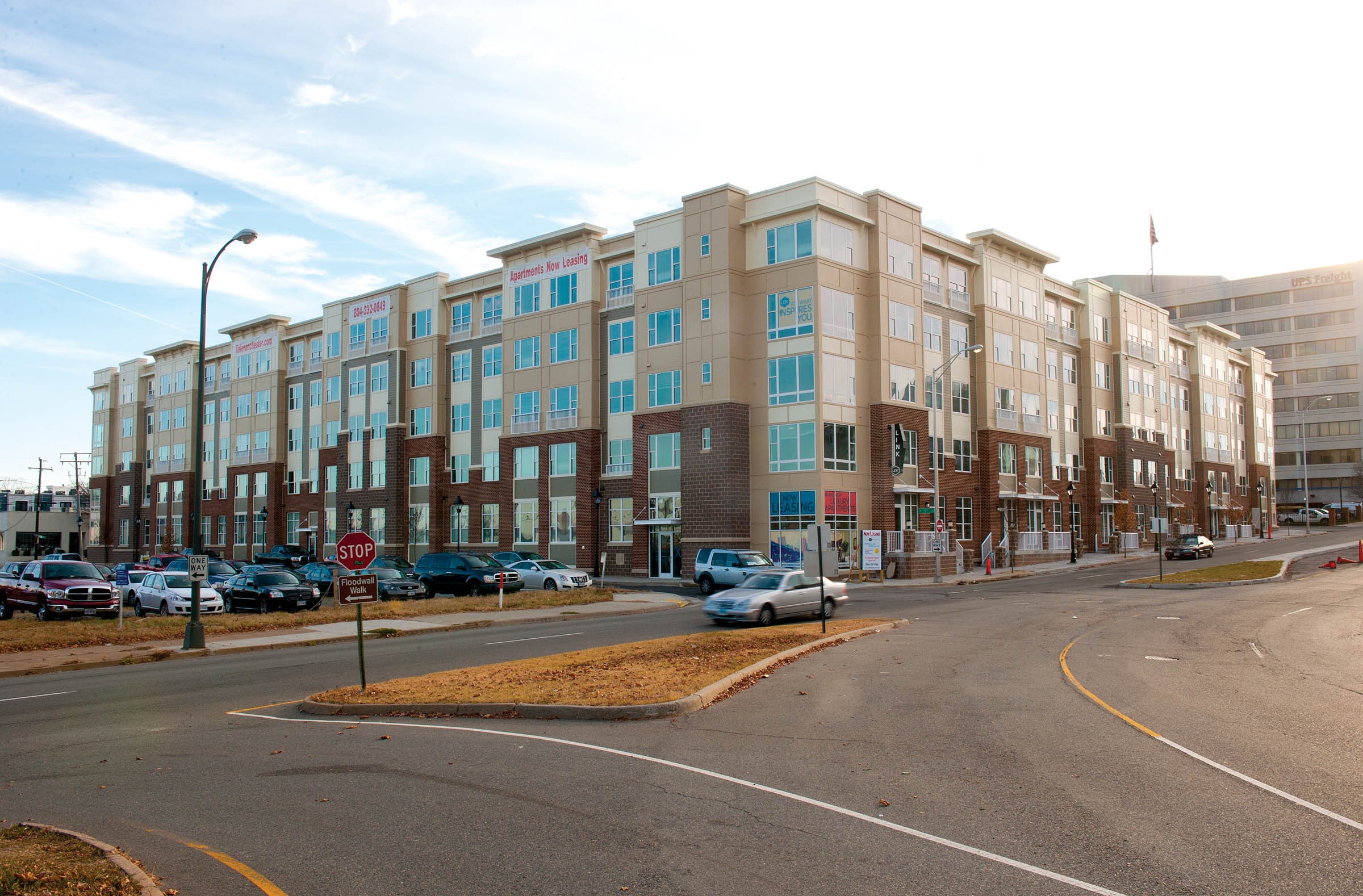 Another of the three major apartment buildings is 909 Perry St. The 44-unit building was developed by Robin Miller, a prime mover of both historic adaptive reuse and new construction in Manchester. He has built a number of duplexes in the neighborhood.

The three-story building at 909 that fills the half-block between Ninth and 10th streets is unabashedly modern in spirit and industrial in its aesthetic. It combines a rusticated cinderblock base with somber gray paneling alternating with corrugated metal siding. Rear balconies on the upper floors take advantage of the dramatic views of the city skyline. The only off note here is the center entry bay of the building where the designer lost faith with modernism and added a splash of classicism with an awkward entablature at the roofline.

Finally, there's 1000 Bainbridge St., the brick behemoth that fills the sloping half-block bounded between 10th and 11th streets. Here, the all-red brick rises three stories and offers its residents balconies on the Bainbridge side. Brick was a wise contextual choice because it reflects the stately Archibald Freeland House (perhaps Richmond's oldest brick house) and two handsome townhouses across the street. And if the apartment complex's white trim is disconcertingly klutzy, the row of mature shade trees along the sidewalk provides grace notes.

Manchester's three new buildings, while not advancing anything architecturally, do no harm. By providing sorely needed in-fill, they validate a once-proud neighborhood that once was shunned, written off and forgotten. And while demand and development continue here, perhaps the bar can be raised architecturally. S