The “South Park” guys’ musical about faith takes over Richmond. 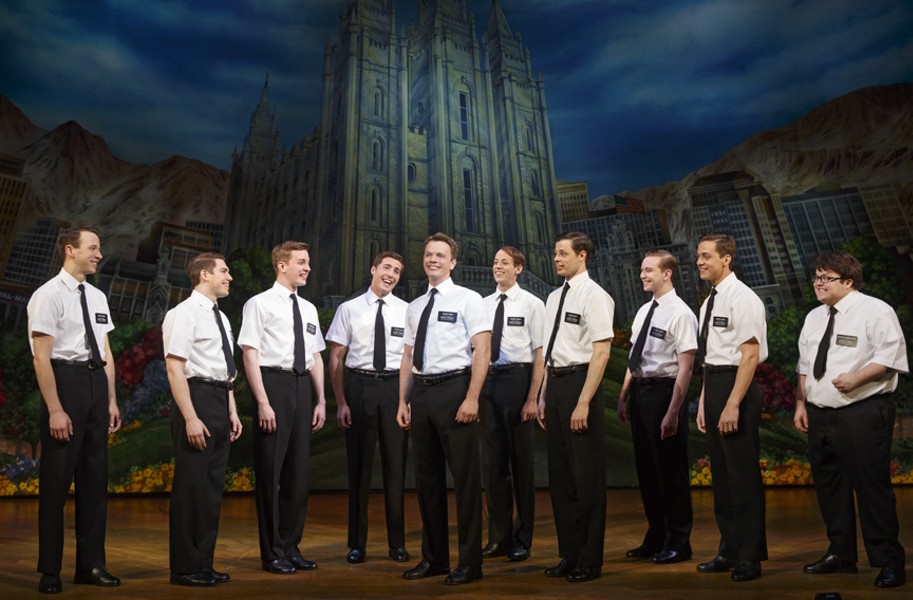 Polish up your name tag and don your special underwear: "The Book of Mormon" has arrived to spread the good news in Richmond.

Since it arrived on Broadway in 2011, the musical has received near universal praise from critics, earning nine Tonys and setting box-office records. The cast album won a Grammy and hit No. 3 on the Billboard charts, the first Broadway album to break the Top 10 in 42 years. Its second U.S. national tour stops in town this week.

As you might expect from a show about Mormon missionaries and Ugandan warlords, the musical's genesis is nearly as intriguing as its plot: While working on the raunchy marionette movie "Team America," "South Park" co-conspirators Trey Parker and Matt Stone were advised to check out the raunchy puppet musical "Avenue Q." If a future collaboration hadn't crossed their minds, Parker and Stone were surprised to find themselves thanked in the show's liner notes.

For nearly seven years, the trio met to craft a musical about two 19-year-old missionaries sent to a remote village in Uganda. Upon arriving, they find the native villagers devoid of hope, ravaged by AIDS, famine and disease, and a despotic warlord named General Butt-Fucking Naked. With villagers cursing God daily, Elders Kevin Price and Arnold Cunningham are confronted for the first time with questions of faith.

Just as the "South Park" and "Avenue Q" creators used the framework of children's cartoons and educational television for their own crude ends, "Book of Mormon" borrows its structure from the classic Broadway musicals of the mid-20th century — especially fish-out-of-water plots like "South Pacific" "The King and I."

"If you like musicals, you're going to love it, because there's a tribute to every classical musical there is," says Pierce Cassedy, who plays Elder McKinley in the touring production. "It's a musical for people who don't like musicals as well. It kind of makes fun of traditional musical theater."

In the show, Cassedy plays a repressed homosexual Mormon who encourages Price and Cunningham to ignore negative thoughts about their faith.

"I've been turning off my gay feelings, and I do that by tap-dancing and wearing sparkly outfits," Cassedy says of his character. "It's hard to explain. You just have to see it."

For actor James Vincent Meredith, just auditioning for the musical was a leap of faith, as he usually tackles plays and television roles. At the insistence of his agent, Meredith read the script and turned from skeptic to believer.

"I read it three times and I was rolling on the ground each time I read it," says Meredith, who plays village chief Mafala Hatimbi. "I just couldn't get over the fact that people were allowed to do this onstage."

Given the musical's crudeness and subject matter, Cassedy has been surprised at the Mormon community's reaction to the show. At one point, the cast took a pilgrimage to meet with a Mormon mission president in Palmyra, N.Y., the birthplace of the Latter-day Saint movement.

"He gave us this heartfelt speech about how it had provided a platform for people to talk about it," Cassedy says. "They only take positive things away from it. They're just happy that Mormons are in the spotlight in some way, and that it piques people's interest."

Their embracing of "Mormon" might be because, for all its blasphemous and crass language, the show is tempered by an underlying sweetness.

"I was happily surprised that we would meet Mormons outside of the show trying to get people interested in Mormonism," Meredith says. "They really get the point — that this is really about faith. It's not about taking a stab at Mormonism or Mormons in particular.

"It's an equal-opportunity offender, and it seems to be more about faith in something and what that means." S

"The Book of Mormon" will run at the Altria Theater Nov. 4-9. For information about the show call 592-3401 or visit altriatheater.com.