Theater Review: "Next to Normal" 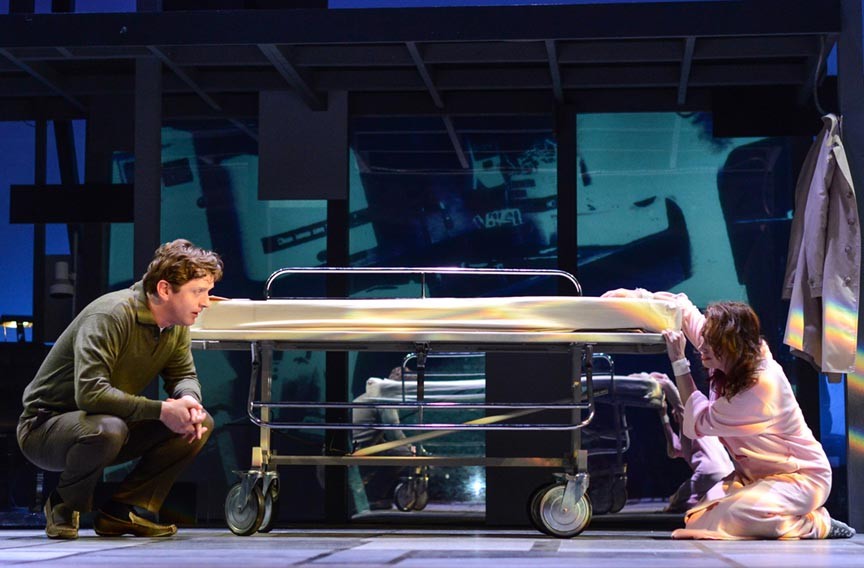 Musicals can sometimes squeeze the complexity out of interpersonal drama by shoehorning human interactions into peppy show tunes. For those who eschew musicals for that reason, you should run, not walk, downtown to see "Next to Normal."

This soaring, surprising, sometimes gut-wrenching show is getting a bravura staging under the Cadence Theatre Company banner, the company working in partnership with Virginia Repertory Theatre and enlisting accomplished director Chase Kniffen to deliver a powerhouse production.

What makes it so good? Strong, clear voices. Kniffen's cast members are never daunted by the propulsive, complicated rock score by Tom Kitt and Brian Yorkey. Working with music director Kim Fox's just-loud-enough band, they spin from one doozy of a song to the next, letting the music enhance the emotion, not overwhelm it. And in a story about the devastating effects of bipolar disorder, there's plenty of emotion to go around.

A musical about mental illness may seem like a dicey proposition, but this Pulitzer Prize-winning show wisely expands the focus beyond just the mentally ill person, in this case housewife Diana Goodman (Andrea Rivette), so you can see how those around her struggle. Diana's husband, Dan (Duke Lafoon), has supported her for years but is reaching the end of his rope. Her daughter, 16-year-old Natalie (Christie Jackson), copes by overachieving but begins to loosen up thanks to the attention of an ardent suitor, Henry (John Mincks). Only the Goodmans' son, Gabe (Terence Sullivan), seems unconcerned about Diana's condition, even as her doctors (both played by Russell Rowland) struggle to find ways to manage her unpredictable behavior.

As the center the show whirls around, Rivette underplays any outright "craziness" in Diana, pushing her actions just beyond normalcy so that she remains completely relatable. While he's called "boring," the dad isn't lost in this drama, with songs such as "I Am the One" revealing that his steadfastness comes at a cost. Lafoon is riveting in the role and his "I Am the One" reprise at the show's end is a heartbreaking highlight.

Fresh from her breakout turn in "Spring Awakening" last summer, Jackson shows great range and dexterity — not to mention killer pipes — in making Natalie so much more than a whiny teenager. Sullivan's energy and physicality are showcased in Gabe's signature song, "I'm Alive," which invigorates a show that otherwise might seem a bit of a downer. Mincks and Rowlands both fully inhabit their smaller but pivotal roles, Mincks in particular sharing a winning chemistry with Jackson.

Kniffen surrounds his cast with light and sound while they scamper around Brian Barker's multileveled, industrial-looking set. The lighting design by K. Jenna Ferree is practically a character in itself, with bold backsplashes of color carved into compelling shapes by scrims and cutouts, though some of the video projections distract more than enlighten. Sue Griffen's costumes are largely utilitarian with welcome flourishes in Sullivan's dapper tuxedo and Jackson's pretty prom dress.

"Next to Normal" creates something phenomenal out of an unconventional subject. The best summary is the shortest: Go see it. S

"Next to Normal" plays through May 18 on the main stage at Virginia Repertory Theatre's downtown complex. Tickets and information at va-rep.com or by calling 282-2620.