Food Review: Asian bar food comes into its own at Commercial Taphouse & Grill. 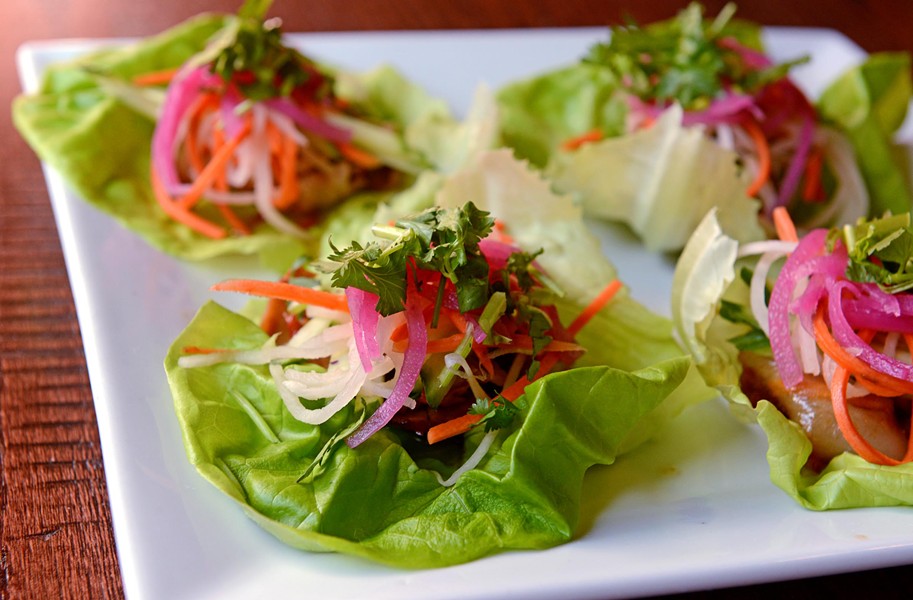 How you feel about Commercial Taphouse & Grill’s reincarnation may depend on beer goggles — and not the kind brought on by inebriation.

In Commercial Taphouse’s previous life, it carried an excellent array of beer while serving hearty offerings such as racks of ribs and ploughman’s platters. But with great acoustics, it also was known as a fine place for even nonbeer fans to catch Sunday night music, often such stellar local acts as the Scott Clark 4tet or the Brian Jones trio.

That Commercial Taphouse is dead. And yet, with virtually no change in décor beyond extending the bar and placing tables where bands used to play, the re-imagined Taphouse — now co-owned by Mekong and the Answer’s An Bui — continues to exalt beer, showing off with 20 varieties ($5-$8) on tap. On the liquor front, a basic bar and accommodating bartender tend to the occasional nonbeer drinker. One night, ours crafts a prosecco and tequila cocktail after learning they’re our favorite libations.

But the biggest change is that with chef Thuy Bui helming the kitchen, the menu focuses on Asian fusion bar food. Culinary degree in hand, Bui spent time cooking at the Roosevelt and grew up in her uncle’s restaurant, Mekong. If Asian bar food doesn’t sound impressive, let me assure you that it is. Layers of flavor and nuance permeate every dish the kitchen produces in my three visits.

For a sense of Bui’s ability to titillate the senses, commence with pork belly lettuce wraps ($9) and savor the richness of pig complemented by the piquancy of pickled carrot, red onion and daikon, the crunch of cucumber and the bright freshness of cilantro.

In what surely must be the ultimate late-night bar snack, a forest of salt and pepper tempura-fried mushrooms ($8) sings with notes of ginger, something you may not notice after a Double Jack IPA or Backwoods Bastard Scotch ale. But as a starter or to help stave off a hangover, they’re magical.

No bar food menu would be complete without chicken wings ($10), shining with either sweet chili or sriracha-soy sauce, the former satisfyingly worth the resulting sticky fingers. The one salad ($10) ought to be called the shredder because everything in it is — chicken, green and red cabbage, cucumber, carrots and peanuts. All is married with a splash of rice wine vinegar and sweet chili paste vinaigrette.

Most of Bui’s menu is devoted to subs, and you’ll be hard pressed to find one that isn’t a sumptuous balance of flavor and texture. Viet dip ($10) starts with beef brisket cradled in a hearty roll and decked out with Thai basil, bean sprouts, cilantro, and for kick, sriracha and hoisin sauce. A ramekin of green-onion-studded pho jus provides an added grace note, as well as moistness.

Keep your eyes open for specials on the chalkboard over the bar, and you might luck into the pickle- and onion-topped ramen fried chicken sandwich ($10), a rousing Asian take on a Southern staple. Ditto the shrimp po’ boy ($10), updated with Asian slaw but maintaining the spicy remoulade for which it’s known. Sides are solid, too, but with house-made chips and fries commonplace, consider kimchi, cabbage salad or Asian slaw, all deft displays of Bui’s handiwork, to round out your plate.

Here you’ll find relaxed servers who talk to and not at diners, proffer personal recommendations and add engagingly to the overall dining experience with casual friendliness.

New and creatively named beers are tapped weekly, a holdover from the previous Commercial Taphouse. Whether it’s a wreck-your-palate IPA challenge or kick-the-keg night, rest assured something reliably new or exotic is being poured.

I find myself unexpectedly at the intersection of beer and charm on my second visit when I spot a couple who order glasses of just-tapped beer before pulling out a deck of cards and playing as they sip, not a cellphone in sight.

Sunday night trivia begins at 7, an olive branch perhaps for those still pining for music nights of yore. I count myself among that group, but dish after dish ensures I won’t be a stranger here even without bands.

So I’ll go elsewhere for jazz and even without beer goggles, keep Commercial Taphouse & Grill solidly on my radar, knowing I can roam the whole of the menu with lip-smacking confidence. A talented woman and great cooking guarantee it. S