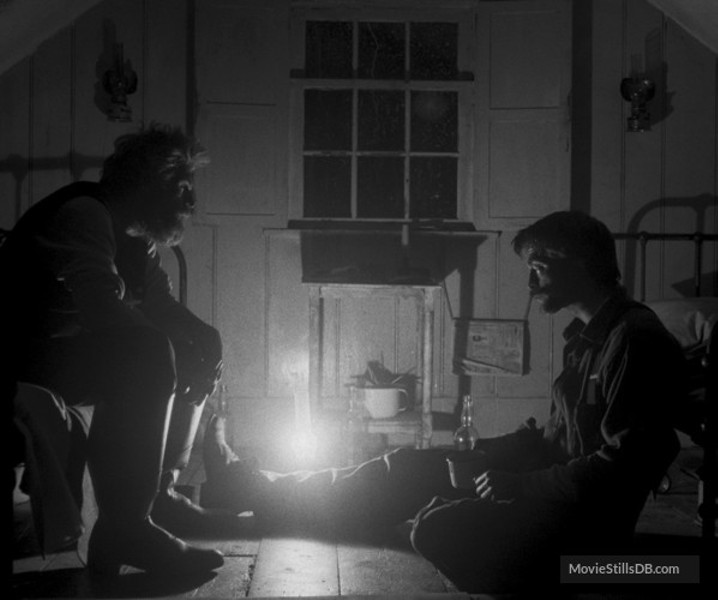 There are enough aural and visual ideas—we’ll be kind and call them ideas rather than gimmicks—in “The Lighthouse” for 15 movies.

Set on a mysterious Maine island in the 1890s, the film has been shot in charcoal black-and-white and a boxy aspect ratio that collectively conjure the feel of silent cinema. The soundtrack is a character in itself, a symphony of heavy industrial noises, especially a kind of foghorn drone that resounds throughout “The Lighthouse,” driving the characters and potentially the audience mad.

Co-writer and director Robert Eggers is determined to make the audience feel the claustrophobia of his two characters, Thomas Wake (Willem Dafoe) and Ephraim Winslow (Robert Pattinson), a pair of lighthouse tenders. Some of Eggers’ conceits pay dividends: There’s a stunning vertical tracking shot from the bottom of the lighthouse, where Ephraim shovels coal, to the very top, where Thomas guards the heavenly light of the bulb. This formal flourish works so well because it has a point, illustrating the differences in power between the men. Thomas is an old-timer who feels he’s earned the right to bask in the light and make Ephraim do all the humiliating and exhausting primal work. And Ephraim seems to agree, until he reaches a boiling point.

With his stylistic bravura. Eggers holds one’s attention for maybe 45 minutes. The opening shots are also astonishing, with Thomas and Ephraim floating toward the island on a boat, materializing out of the foggy ether. But eventually it becomes evident that there’s not much actual movie underneath Eggers’ atmosphere. “The Lighthouse” is a hodgepodge of Lovecraft and Melville that’s always on the verge of acknowledging its own clammy absurdity. If the film had tipped over into comedy, it might’ve come to life, but Eggers doesn’t have that much audacity. He’s here to astound, and that desire trumps all of the film’s other qualities.

After a while, one grows numb to the atmosphere and settles in for the long haul, and so does Eggers, who pits Dafoe and Pattinson against one another in a repetitive battle of actorly wills. Dafoe, a national treasure, wins the competition, because wizened codger is always a more enjoyable cliché than eager-to-please apprentice.

Eggers and co-writer Max Eggers give Dafoe all sorts of ostentatiously insane old-English monologues which toe the line between the poetic and the tedious. (After a while, these monologues, like the atmosphere, cease to astonish.) The game is so stacked against Pattinson that one sympathizes with the actor, who needs to free himself of his “Twilight” apology tour. As “Cosmopolis” and “Good Time” prove, Pattinson has chops.

“The Lighthouse” is essentially composed of three types of alternating scenes. We see Ephraim doing manual labor, accompanied by the aforementioned cacophony of industrial noise; we see Ephraim hallucinating mermaids and other monsters while occasionally being stalked by a one-eyed seagull; and we see Thomas and Ephraim eating dinner and becoming increasingly fixated on alcohol, which is instrumental in their eventual undoing. Eggers doesn’t encourage a guessing game as to the legitimacy of Ephraim’s visions, which include sex with the mermaid, because he isn’t interested in achieving conventional suspense. He’s here to rub our faces in insanity, unwaveringly, for 110 minutes.

There is a brief, startling implication that Thomas and Ephraim—in their boredom, in their sexual frustration, in their drunkenness—might be drifting toward sleeping together, but Eggers is as skittish of elaborating on this possibility as he is of the film’s comic implications. The filmmaker really is terrified of breaking his dreary mood, which is why “The Lighthouse” ultimately feels superficial.

“The Lighthouse” doesn’t have the authentic unease of Lovecraft or the working-class despair of Melville—it offers only a diligent student’s facsimile of those emotions. The film’s style, especially its sound design, also recalls “Eraserhead,” though that David Lynch film also had an emotional point, as its industrial hellscape expressed the loneliness of a man trapped in a loveless relationship with a newborn child.

Eggers’ prior film, the equally relentless “The Witch,” has a through line as an ironic coming-of-age story in which a father’s puritanical fear of evil drives his daughter into a hornet’s nest. “The Lighthouse,” meanwhile, is animated by a talented new filmmaker’s fear of not topping his initial success.