Notes on faux nostalgia, “John Carpenter’s The Thing,” and “Aliens.” 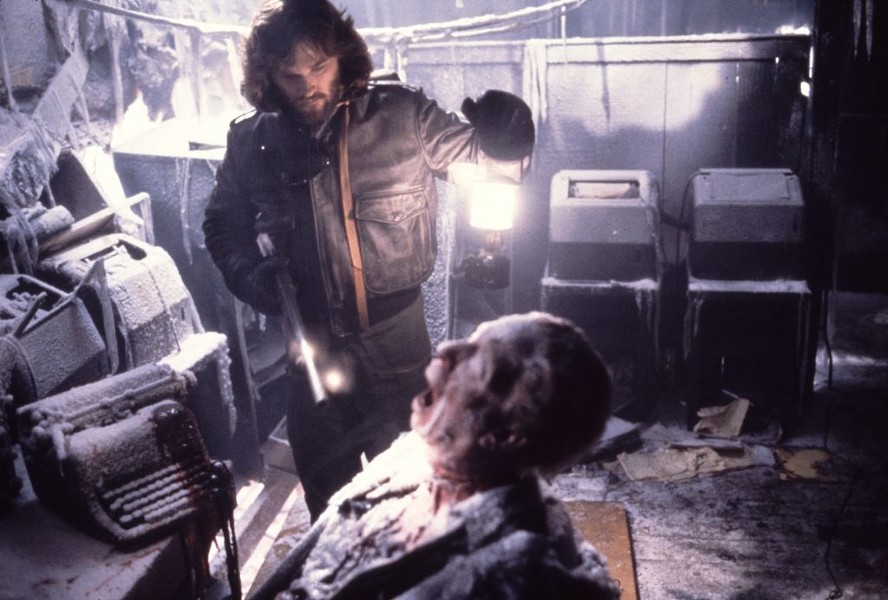 Eons ago, I said to a friend that the ‘80s movies we remember fondly would, for future generations, be like the westerns our fathers insisted we watch with them—baffling homework to be gotten over with quickly so as to appease the elders. I say this as someone who adores westerns, but when you’re a child you want your own stuff. At least children used to. The nostalgia machine may be different these days.

“Stranger Things,” a blender of everything this 42-year-old watched 30 years ago, is huge with children. Vinyl is still a thing. Synth is a thing again. People collect VHS cassettes. Nostalgia is a big business: If you can condition children to yearn for pasts they never experienced, free of the chaos that we scrub from our lives anyway when reminiscing about the old days, you can sell them anything. There’s something poignant and chilling to this notion, reminiscent of Philip K. Dick’s writing.

My point, as much as I have one, is that corporations are learning how to rob middle-aged people—mostly, let’s be honest, men—of the right to bore their sons and daughters and nieces and nephews to death with the detritus of their youth. Kids want to be in on this shit now, and so “in my day” might not have the aura of dread that it once did.

These thoughts ran through my mind as I recently watched “John Carpenter’s The Thing,” which turned 40 this summer, and James Cameron’s “Aliens,” which is now 36. I have seen these films dozens of times, and they are both indisputable totems of the mythical ‘80s that, in part, fuels contemporary culture. Both films set high watermarks for the sorts of things that middle-aged audiences like to rue as missing from modern pop culture: practical effects, a sense of artisanal pride, and an aura of disreputability that seems impossible for modern entertainment in these hyper-politicized times.

These movies, a remake and a sequel respectively, once wrestled with the legacies of their own predecessors. Like the thing of “The Thing,” they regurgitate, morphing the moors of the 1950s, in the first case, and the late 1970s, in the second case, to suit the anxieties of the 1980s.

John Carpenter has spoken warmly of Howard Hawks throughout his career, which is understandable given that Hawks is a great director and a massive influence on Carpenter’s own tales of groups in extreme situations. Hawks isn’t credited as the director of 1951’s “The Thing from Another World”—Christian Nyby is. But Hawks produced and apparently co-wrote it, and it’s very much his kind of movie, rich in his claustrophobic tension. Generally, it’s now considered a Hawks movie, and you can see the seeds of it and Hawks’ “Rio Bravo” in many Carpenter productions. Carpenter has aged into a Hawks himself, a figure of legendary status to audiences and filmmakers.

Given this context, there’s something perverse about Carpenter’s “Thing.” Here’s a filmmaker going straight to one of his wells of influences, and he pointedly leeches his Hawks remake of the very quality that he emulates most in spiritual Hawks covers like “Assault on Precinct 13” and “Big Trouble in Little China:” A sense of macho comedy, of masculine grace under ludicrous pressure.

“The Thing” isn’t very funny; it’s amusing in a macabre and despairing, sick-in-the-bones way. The men doing something, it’s never spelled out, up in the Antarctic aren’t colorfully differentiated. They are anonymously bearded and dressed, speak in functionalities, and break up the tedium of their days with booze, music, and billiards in the break room. There was an attractive, capable woman in “The Thing from Another World,” the kind of Hawks woman who can weather any bullshit a man throws her way, but there are no women in Carpenter’s “Thing.” The men seem to take no solace in one another, even before a monster tears them apart. This is a lonely, lonely movie.

Carpenter’s most obvious departure from the earlier “Thing” is his monster, a shape-shifting leviathan that digests the men and mimics them. If one wanted to be fancy, it could be said that Carpenter also digests the Hawks film, just as future generations— “Stranger Things” included! —have digested Carpenter. Yet Carpenter produces something quite a bit more than the weak-tea homages that feed the nostalgia machine these days. Unlike most modern ‘80s retreads, he digests but doesn’t mimic. Carpenter ultimately produces something different, in a warped shape. But maybe I don’t want to be this fancy. It may run counter to the glorious, unpretentious pragmatism that runs through Carpenter’s work.

Back to different monsters: In “The Thing from Another World,” the alien is a hulking Frankenstein’s creature-like critter, creepy but less resonant. This change in monsters reflects the most profound difference between the movies: Hawks’ is a genre outing, with then-requisite Red Scare anxiety, while Carpenter’s is stark, existential poetry, disinterested in ‘80s fads.

The monster in the 1982 film mocks the characters, rubbing their own anonymity in their faces. A twisted, gnarled, bulbous explosion of faces and limbs and species, this thing feels truly, irrationally alien, and it smashes the men together to echo their interchangeability back to them. It annihilates any sense of human camaraderie the men might share, which isn’t much to begin with. This battle for supremacy is happening out in a cold wasteland, unnoticed by anyone else. Those widescreen vistas, a Carpenter specialty forged in collaboration with cinematographer Dean Cundey, suggest negative space as visual stanzas of mourning; that terrifying, heartbreaking score, credited to Ennio Morricone but significantly reworked by Carpenter, suggests a swan song. Mourning what? Swan song to what? I’m not sure anyone exactly knows. 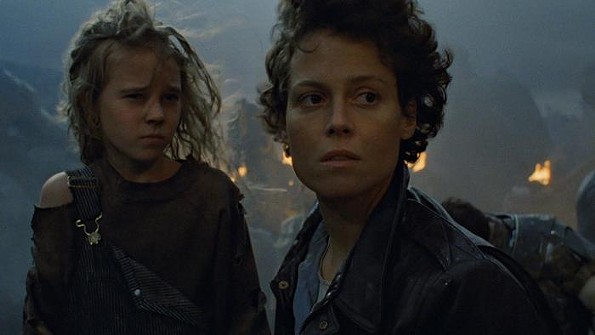 “John Carpenter’s The Thing” and “Aliens” do not have a lot in common besides monsters from space and one other thing that couldn’t be of less interest to most modern cinema, genre division or otherwise: A sense of working-class texture.

The men in the “The Thing” look like they work for a living, in clothes bought in bulk. Kurt Russell might’ve been a star by that point, or near stardom, but he fits into that framework. The settings look lived in. When’s the last time stuff looked worn in a pop movie, or stars looked like they were more than 10 minutes away from a mani-pedi or a six-hour ab workout? In “Stranger Things,” you can sense careful cultivation of the sets to resemble the messy domestic realms of an early Spielberg movie, but in Spielberg it wasn’t studied; it was life. This is one reason why modern pop cinema seems so facile.

“Aliens” has a similar texture. The premise is essentially: What if a giant erector set was rampaged by the monster of Ridley Scott’s “Alien?” The colonial habitat terrorized by the aliens is composed of giant metallic buildings with corridors spouting off in every direction. The joke—a good one—is that the visiting humans inadvertently built an ideal setting for an invader that suggests a blend of militarized vehicle and praying mantis. The buildings look like they’ve been through hell and the colonists—in the extended edition at least, which shows them before they’re killed—look tired. The space marines sent to battle the aliens are cliches out of war pictures but they’re sweaty and messy and haunted. Compare them with the sanitized stick figures of Cameron’s “Avatar” and you’ll see that even he has succumbed to the self-cannibalizing impersonality of the times.

Apart from working-class quotidian details, “Aliens” is a different beast from “John Carpenter’s The Thing,” which does have quite a bit in common with the first “Alien.” “The Thing” and “Alien” are neurotic, while “Aliens” is a narcotic thrill ride that derives whatever subtext it might have from Cameron’s ongoing hard-on for weaponry. Can’t say Cameron doesn’t have a sense of humor: the marines’ spaceship looks like a giant futuristic machine gun, for Christ’s sake. Cameron also has fun visually rhyming the aliens with the human hardware that can’t even remotely compensate for the fact that said humans are far less physically adaptable than their monster enemies.

Egotistical soldiers mucking about in a realm with locals they don’t understand, maybe more subtext is creeping in. It helps to know that Cameron co-wrote “Rambo: First Blood Part II” for Sylvester Stallone the year before “Aliens” in 1985, and they amusingly share the same plot once you dig beneath the surface. Like Sly’s Rambo, Sigourney Weaver’s Ripley is deeply damaged. For Rambo, it’s the Vietnam War; for Ripley, it's her tango with an alien in the Ridley Scott movie. Both are natural warriors stymied by bureaucrats. In the former, Rambo retroactively wins the Vietnam War despite his government rigging the contest, while “Aliens” allows Ripley to annihilate the species that ruined her life. Both are pulpy war movies, and the former is morally indefensible for utilizing real trauma while the latter is effectively traumatic.

Cameron directs the unholy hell out of “Aliens.” He may have gone on to bigger budgets and bigger profits, as well as a bigger slice of the cultural zeitgeist, but he’s never topped his performance here. And he has a patience that’s unusual for an action director. The first half of the nearly 2 ½ hour “Aliens” is set-up, while the second half is composed of one extraordinary set piece after another. Cameron gets a lot of mileage out of the aliens looking entirely different from different vantage points. Watching them bounce all around every angle of a tight corridor, they are truly unnerving. The quicksilver editing is intensified by James Horner’s exhilarating yet dread-inducing score, which suggests what might’ve happened if Wagner had gotten a job producing music for action movies.

“Aliens” is so relentless, so determined to work you over, that it becomes poignant through force of will. Weaver invests Ripley’s quest to destroy the aliens and save a surrogate daughter figure with an operatic undertow, and Cameron has the sense to build her the pedestal she deserves. A scene near the end of the film, with Ripley arming to the tooth as she descends an elevator into the hellish hive of the aliens, is framed as an aria of might and longing. So is the moment soon after, when Ripley burns the Queen Alien’s eggs as Horner’s score blares. The Queen Alien is a showstopper of design, and Cameron has the talent and the audacity to somehow imbue that thing with a personality. You might halfway pity the alien as its children are destroyed, and you certainly feel as if you can read its mood swings as it pursues Ripley.

Cameron also accepts Ripley’s superhuman competency at face value, without nominating himself for a humanitarian award as modern filmmakers might have. It’s difficult to imagine “Aliens” being made today without self-conscious dialogue about women in the workplace, or some other agenda-based speechifying. Cameron, however, doesn’t politically peacock—he knows she’s awesome and that said awesomeness speaks for itself. That’s actual respect. That’s progressive.

Now get off my lawn, kids. Go to the Byrd and revel in all the stuff that your rip-offs and remakes and mishmash things have failed to capture of the real genre McCoy.