In "Men," an English filmmaker pushes pretentious modern horror to its breaking point. 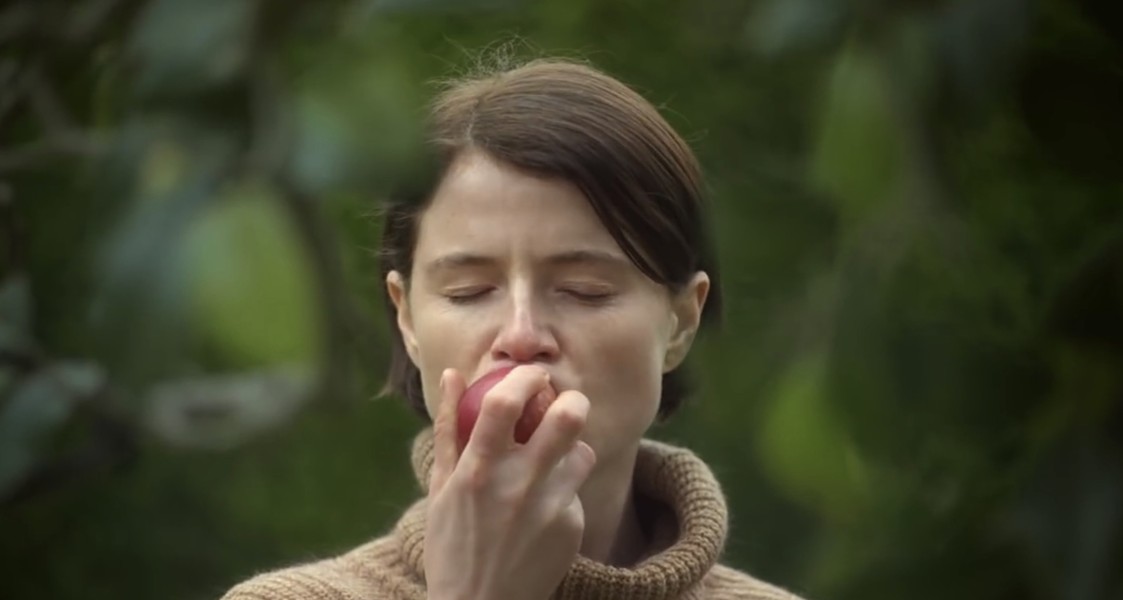 Alex Garland’s “Men” plays like an unintentionally astute parody of the horror films that are often released by its distributor, A24. The strategy is simple: Take a genre formula, add a fake-smart gimmick, and pare and slow everything down until the pleasures of genre filmmaking become nil. This, we’re told, is elevated horror, and the pretentious atmospherics encourage us to take ideas that wouldn’t be good enough for a horror huckster like William Castle with a straight face. “Men” is the kind of horror movie that thinks it’s too good for the label—the sort of thing you’re meant to call a “psychological thriller”—yet much of it religiously follows the slasher template.

Harper (Jessie Buckley) is somewhere in the rural English countryside for a two-week recovery idyll following the suicide of her abusive husband, James (Paapa Essiedu). Seen in flashbacks, James has been conceived only in terms meant to underscore various masculine aggressions, micro and macro alike—he’s a character shaped by his creator’s fealty to think pieces. He punches Harper, who already wants to leave him, and says that if he kills himself, it will be her fault. Not long after, he’s plunging off the roof of their apartment building to his death, leaving Jessie with considerable emotional scar tissue.

But these flashbacks, lit in amber hues that suggest that Harper and James live inside a fading sun, are misdirection, meant to lend “Men” a patina of deeper meaning. Far too much of “Men” follows Harper as she walks around the countryside where she’s staying, while an ominous score cues menace. Slasher film foreplay, in other words. We can feel that Harper is being watched or followed, and so a game of stalking develops, one that’s tarted up with the atmosphere of folk horror films like “The Wicker Man” and “Don’t Look Now.” Those movies are dense with meaning and suggestion; they make you feel delirious with overstimulation, as if you’re going to miss something that would be dangerous not to see. Meanwhile, “Men” has the same emphatic, underpopulated, one-thing-at-a-time quality that deadened Garland’s “Ex Machina” and “Annihilation.”

Harper eventually sees a naked man (Rory Kinnear) near the woods staring at her. This moment anticipates Garland’s eventual loss of control over the tone of this entire picture. Because this moment, meant to be frightening, is hilarious. It has something to do with how casually and expectantly Kinnear gazes at her, his huge penis hanging peacefully between his legs. “Men” is so ploddingly humorless that such strained moments of surreal obscenity, and there are many more to come, inadvertently take the place of punchlines. We’re also meant to notice that this man bears a striking resemblance to the owner of the home Harper is renting, a man who has also been conceived—say it with me now—entirely in terms that underscore masculine aggressions, micro and macro alike. If James is a sensitive alpha gone wrong, the homeowner is an awkward dweeb who reminds us that dorks can menace women as well, with their very cluelessness.

Soon the aforementioned fake-smart gimmick announces itself: all the men in this rural wonderland, really a hellscape, are played by Kinnear, including a child who has the actor’s face digitally superimposed on him. And they are all awful, belittling and harassing Harper. This is the entire plot of “Men.”

Alternating with slasher-film tracking shots, innuendo, and misdirection, are scenes in which Kinnear is broadly odious. The conceit becomes goofy immediately, and it doesn’t make much sense even by Garland’s own rules of play. If all men are monsters, wouldn’t it be scarier if they looked different, as in real life, so that they can coax a woman’s guard down before unveiling their ultimate evil?

Perhaps it would be scarier if seemingly different men all spoke with the same voice, but then that would come too close to the source that Garland’s ripping off anyway: Charlie Kaufman and Duke Johnson’s “Anomalisa,” which features a male so alienated from women that he envisions them all sounding the same. We don’t know at first that the unvaried voices represent the character’s damaged psyche; we assume this could just be the way this world works, and that reveal hits us like a psychosexual sledgehammer. Kaufman and Johnson believe in the rudimentary notion of setting a narrative up and developing it, while Garland’s lame Kinnear sketches trod the same ground over and over again without deepening or escalating.

Buckley’s presence, and the trendy obsession with the awfulness of men, also bring to mind Kaufman’s “I’m Thinking of Ending Things.” That movie was so embarrassingly narcissistic and self-pitying as to risk putting me off Kaufman’s work permanently, but it seems to have established Buckley as the avatar for Women that Fake-Sensitive Male Artists Cannot Please. As with Kaufman, there’s a sense that Garland’s asserting his feminist bona fides performatively. “Men” may throw the titular gender under the bus relentlessly, for the sake of earning Garland kudos in a post-MeToo world, but men are still the filmmaker’s primary source of interest. Kinnear gets all the juicy moments, allowing the fearless actor to frequently enter a twilight zone of profound ludicrousness, while Buckley’s character is a cipher defined only by her past and present trauma.

Near the beginning of the film’s third act, it appears that Garland senses just how little is going on in his art project. “Men” features an evocative countryside, but there are only three characters, all trapped in glib behavioral holding patterns with no story to help them along. Garland has pushed the pretentious, thematic modern horror movie to the breaking point of nothingness, and so he springs a body horror climax for the sake of catharsis. The body horror, rich in wan CGI and derivative of Miike Takashi’s “Gozu,” is borderline resonant, featuring a man-thing so riven with torment that he replicates himself ad infinitum, robbing women of a core biological function. Which is to say we’re watching a demonic incel that must have at some point resorted to screwing himself, though this idea is pissed away with an obvious and fashionably anticlimactic finale.

“Men” is determined to cancel itself out before your eyes, which, come to think of it, might be the ultimate embodiment of Garland’s artistic as well as gendered self-loathing. Given the tenor of our times, no wonder he’s earning some ecstatic reviews.