Monroe Park to Get $6 Million Makeover

Renovation of historic park could begin in April 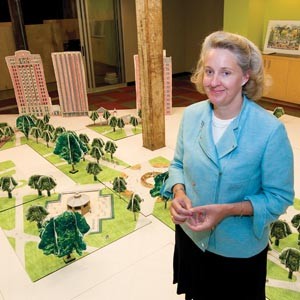 On the first day of fall semester at Virginia Commonwealth University last week, scores of students mill about the sidewalks outside three high-rise dorms. Except for a handful of passers-through, Monroe Park directly across West Franklin Street is empty.

The fortunes of the historic and prominently located park — characterized in recent decades by minimal maintenance, a visible homeless population and underuse by VCU students and staff — stand to rise dramatically when and if a proposed $6.3 million makeover is completed.

It's been six years since the Monroe Park Advisory Council, a 12-person group, was established with the blessing of then-2nd District City Councilman William Pantele. Councilman Charles R. Samuels continued his support for the project, and the group says it's ready to move forward with a plan that will make the 7-acre Fan District park enticing to a broad audience for a variety of activities.

The master plan, developed by Alexandria-based design firm Rhodeside & Harwell with working drawings recently completed by Richmond-based 3North, respects many of the traditional characteristics of the park, Massie says, maintaining its surrounding and diagonal walkways; restoring the generous canopy of shade trees; and welcoming all user groups. The plan will attempt to recapture the historic spirit of the space as it was in 1904 and update it for contemporary use.

Among the features of the plan are:

ƒ?› Sidewalk and lawn improvements, which will be established at the same grade to enhance pedestrian safety and allow such activities as Frisbee or football.

ƒ?› Designated pedestrian park gateways that will relate to surrounding streets and create a sense of place.

ƒ?› A lawn for picnicking, concerts and staging other events.

ƒ?› Renovation of the Checkers building, the octagonal, brick park house, to include a cafe and restrooms. Various adjacent areas will be designed to accommodate flexible seating and game areas for chess, quoits and other activities.

ƒ?› A new water feature that would appeal to families with young children.

ƒ?› Replanting the park's perimeter in a ground cover to delineate the overall green space from the surrounding city sidewalk and capture runoff.

Working documents are complete and, according to Massie, the city has committed $1.1 million toward the overall project for initial subsurface work such as plumbing, sewer and electrical upgrades. She says additional funding will come from the city and private sources. “The city can't get started pulling the park apart until we've raised enough money to put it back together,” she says.