Artist Tracey St. Peter is getting away with it at Eric Schindler Gallery. 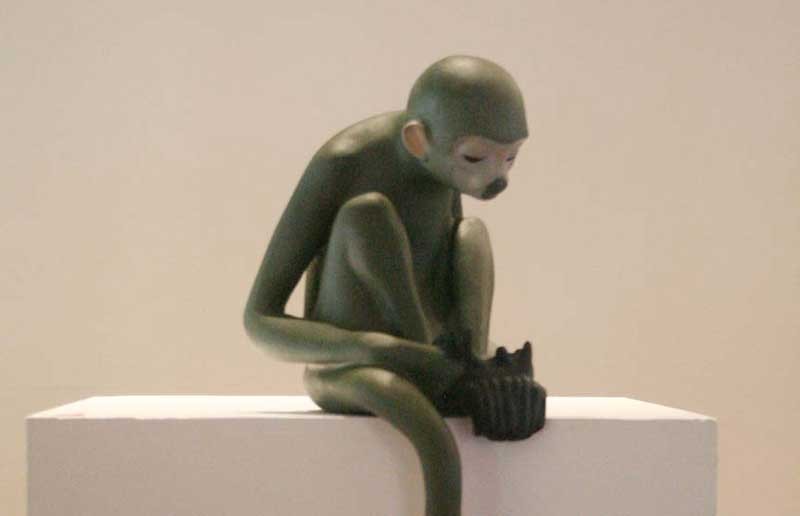 The materials listed for artist Tracey St. Peter's show, "Quiet Monkeys, Memory Objects," could just as well come from a first-grade teacher: papier-mâché, nontoxic clay, beeswax, seashells and beads. "It's pretty gutsy," says Eric Schindler Gallery owner Kirsten Gray, "to use seashells in art. She gets away with it."

The sculptures and reliquary objects look like creatures from the corner of a dream or a Japanese fairy tale, featuring rabbits, snakes and many, many monkeys. "That's the first question everybody asks," St. Peter says. "Why monkeys? I don't know. There's not an answer, really."

Gray sees a lot of art history in St. Peter's work. "I look at a piece and see it all come together," she says. "I see something ancient, some modernism, pop and personal meaning. That's really wild and good."

St. Peter first builds the sculpture with clay or papier-mâché. "The Richmond Times-Dispatch, with a little flour and salt," she says. She then melts beeswax on a hot plate and uses a hair dryer and a razor blade to shape the sculpture into something that looks like it has been carved from a block of marble. "Luckily, the end product drives me," St. Peter says of the labor-intensive process. "I think there's a real obsessive quality in me. But really, having to look at a monkey while you're doing it really helps you along."

Many of the animals have tiny porcelain teeth fashioned from broken plates. Personal objects from St. Peter's life are incorporated into her sculptures, including beads from her grandmother's broken necklace, a pendant she wore during a tragic and difficult time in her life, and rose thorns from her garden. For St. Peter, letting go of these objects feels right. "It's a good release," she says. "It feels good to share these things or give them new life with someone else."

Many of the sculptures have figures that detach like little toys, or they open up like a box to hold a relic. Some of the monkeys have their hands or mouths open to receive a story or memory from the viewer. St. Peter has personal stories to share, but lets the monkeys carry the experience. "I don't really want to put my stories on anybody else," she says. "The stories you bring are going be bigger than what I could say, anyway." S

Eric Schindler Gallery holds what it is calling an "open-house closing" for "Quiet Monkeys, Memory Objects" on Nov. 12 from 11 a.m. to 4 p.m. Ten percent of all sales, including works in the gallery collection, will go to benefit the Alliance for Progressive Values. For information, call 644-5005 or go to ericschindlergallery.com.