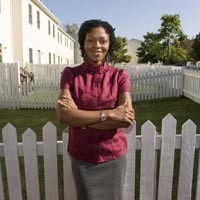 As a young girl growing up in the Hole, a crime-infested section of the Del Ray community in Alexandria, Monique Johnson would walk through open-air drug markets on her way to school. It didn't faze her.

“Walking past the drug dealers,” she says, “I was just kind of oblivious to it.”

The instability would have been too much for most. She lived in a poverty-stricken neighborhood as an only child, with her mother, who suffered from a mental illness, often out of work. Somehow, her surroundings forced her stay focused.

“I always had my eye on going to college, and there were no ifs, ands or buts about it,” she says. “I think just because of the volatility at home [and the neighborhood], I think that for me probably kept me focused. There's no room for me to mess up.”

After high school, she earned a civil engineering degree from the University of Virginia, but found her way to her calling: affordable housing.

She took a job with the Better Housing Coalition, then moved to the Highland Park Community Development Corp., and then to her current position as community housing officer for the Virginia Housing Development Authority.

“I think the line of work almost chose me,” she says.

Johnson founded the Emerging Leaders Network, which supports young professionals in her industry, and in 2008 Affordable Housing Finance magazine named her one of its top young leaders in the country. A Big Sister for the last seven years, Johnson has tried to instill the message that she received as a child, she says: “You can't let your circumstances define who you are.”