Sha Rich This image is from a Valentine exhibition, “Don’t Touch My Hair,” which explores “diverse African-American identity through stories of Black hair experiences.” It runs through Dec. 31.

Contemporary art galleries and art museums have long served as places designed for unadulterated reflection. Even during bustling First Friday events replete with cheese plates and conversation, there’s a sense of calm that permeates an exhibition space. The outside world is a distant roar.

But a global pandemic and national moment of racial reckoning have changed all that – these reverential spaces can no longer afford the luxury of hovering above.

“Everyone packed up their office,” says 1708 Gallery’s executive director, Emily Smith. “And we were still paying rent on this giant space that we weren’t able to use.” So it put out a call to artists: Have you lost access to work? Are you unable to pay for a studio space or feel uncomfortable using your shared space?

We were less interested in what kind of art you were producing: We wanted it to be meaningful of course, but it was more about the need,” Smith says. Since March, it has been able to offer up the gallery as a studio space for four local artists and to date 1708 and a slew of other arts organizations — with the help of CultureWorks, who administered the funding — have raised $85,000 for grants.

Though the gallery is currently open to the public, Smith notes it has shortened its hours and has had to reschedule international flights and complex exhibitions well into 2021. The popular annual Inlight exhibit is going to look very different this year – think multiple sites with fewer participating artists spread out over a week versus a large-scale, two-day festival. The gallery is a tiny nonprofit with a matching diminutive budget. But it’s keeping its head up, Smith says, “We’ve had some moments of grace.”

The current exhibition, “Primordial Emanations,” was originally slated to be a solo show by painter Mahari Chabwera. But over the months, Chabwera became both participating artist and curator, working with members from the Newport-News-based Contemporary Arts Network, known as CAN.

“Mahari was so committed to the energy and vision of the group, of how they’re providing a framework and structures to advance the careers of Black artists. It’s really evolved into this lovely show,” Smith says.

The network’s logo sits above a much smaller 1708 Gallery logo in the front, Broad-Street-facing window. “That was a deliberate decision,” Smith says. “This is their space right now, not ours. We’ve really been thinking about what resources and platforms people have, and how they can be shared.”

The Valentine museum’s director, Bill Martin, says he’s been considering its role as an historic institution since the pandemic first started. “As a museum dedicated to Richmond history, we certainly want to document and respond to this moment. We’re thinking about, in addition to reopening safely, how to reopen in a different way,” he says.

In the downtown of the former capital of the Confederacy, the Valentine must be part of the city’s ongoing conversations about race and equity.

Martin says it’s the museum’s job to listen to the community and provide more than 400 years of historical, Richmond-based context. “This is part of a bigger discussion of, ‘what does Richmond want to be in the next 50 years?’

The Valentine is currently open from 10 a.m. to 5 p.m. Tuesdays-Sundays, with stringent safety measures in place. Martin notes that every Tuesday and Thursday through the end of October it’s playing host to local musicians for a midday, socially distanced concerts in the garden. They are free to attend, first come, first served.

“It’s an opportunity to provide a little income for artists during a time when there aren’t a lot of gigs,” Martin says. “Suddenly during lunchtime the neighborhood is filled with music, you hear it and know there’s something still happening, still alive.”

A proponent of experiential learning, Martin is hoping that the transition to all things virtual will not be permanent, though he appreciates the flexibility and accessibility of online programming.

For this year’s “controversial history” series, Martin says the theme is simply 2020. The monthly lecture has been condensed from two hours to one and will feature speakers, who you’ll view on screen instead of in-person, covering everything from the impact of the coronavirus and protests on local elections, to mental health in general. The mental health segment will take place, fittingly, Tuesday, Nov. 3. Martin recommends tuning in before election returns start rolling in.

A mile away in historic Jackson Ward, Gallery5 co-founder Prabir Mehta is also musing about what the city will look like in the next half-century. The community-centric gallery is currently closed – on the inside, at least.

The stage is barren and chairs that have seen better days are stacked and ready to be replaced. “If you’re looking for the quintessential opening-night art experience, this is not it,” Mehta laughs. The verve of the space persists, though, even without weekly comedy shows and burlesque nights. Mehta gestures toward the historic firehouse’s long, tall, street-facing windows. “We’re making the most of the space.”

Gallery5’s second annual “Mother India” exhibition will be on display through November, becoming a part of the very building itself.

The street show will feature photography of India and artwork from local Indian artists on the windows, which will coincide with online programming including musical performances and how-to workshops. The gallery’s current virtual exhibition, “Colors,” complements the real-time install.

A musician and consultant by day, facilitating creative endeavors at Gallery5 is Mehta’s passion project, one he’s only dug into more during the pandemic.

“We don’t know what the ramifications of this virus are, I have a commitment to my staff, the board, the landlord and the community. The community – and I cannot state this enough – without their support the past 15 years, none of the magic that has happened here and emanated outwards would be possible,” Mehta says. 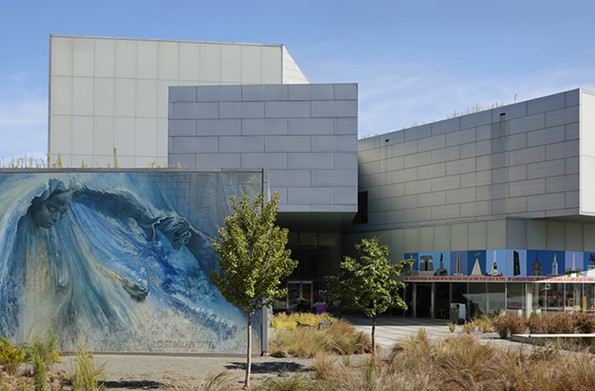 The Institute for Contemporary Art at Virginia Commonwealth University and VPM have announced that they are creating a media center inside the institute for the production of audio content by university students and community members – providing a new outlet for diverse storytelling. The center will launch this fall under the leadership of Chioke l’Anson, director of community media, with podcasting workshops, training and special performances held virtually. The VPM + ICA Community Media Center is expected to open in the spring.

Like Mehta, the Virginia Museum of Fine Arts’ director, Alex Nyerges, is committed to serving the residents of the River City. The museum is one of the largest and most comprehensive art museums in the nation and for that reason Nyerges says it’s critical that it is open 365 days a year – with recently added evening hours for those who can’t get away from their 9 to 5. Except for special exhibitions, admission is free.

Since reopening July 4, the museum has had 60,000 visitors. In the virtual realm, online lectures such as the “Sunken Cities” symposium featuring curator Peter Schertz, have drawn more than 1,000 audience members.

“We do a lot of surveys,” Nyerges notes, “and we found that half of these online audiences have not visited the museum in person in more than two years, and some have never visited. We’re expanding our audience.”

Nearly a year ago, the prophetic Kehinde Wiley statue “Rumors of War” was unveiled at the museum after a brief stay at New York’s Times Square.

“We knew it would be controversial,” Nyerges says. “History is about moving forward, and here you have this artist changing the notions of heroism by putting forth this image of a young Black man, perhaps the most maligned demographic in America today.”

The sculpture stands, triumphant, a beacon during a very dark year.

“To be reflective and responsible is the fabric of who we are.”