"Every Virginian should be arrested and charged with contributing to child endangerment because our tax dollars go to herding our poorest black people into these concentration camps." 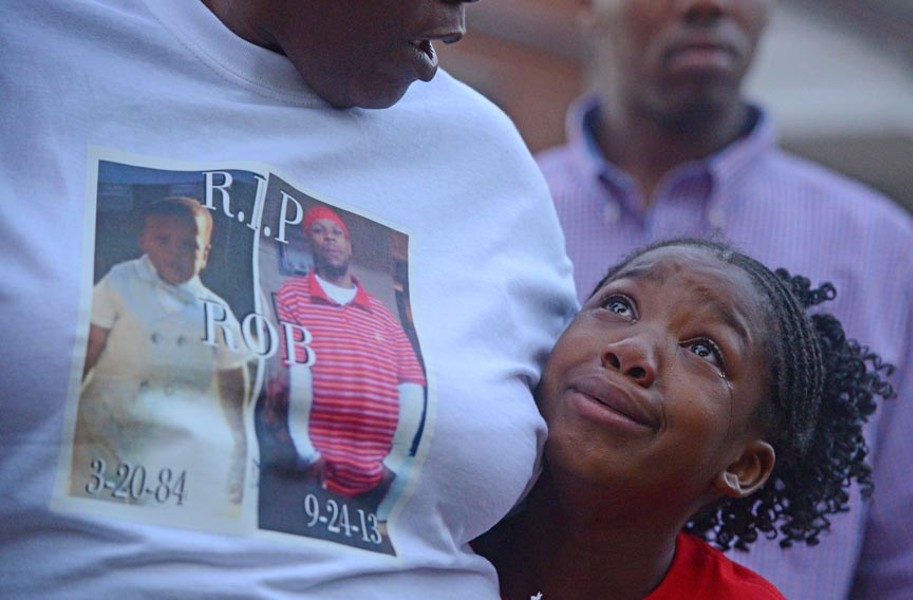 Scott Elmquist Richmond’s 24th homicide victim of 2013 was Robert L. Poag. The 29-year-old was shot to death Sept. 24 in the 2100 block of Deforrest Street in the Whitcomb Court public housing community. Poag’s cousin, Adrianna Avery, is comforted by Robert’s mother, Felicia Dixon, at a vigil on Oct. 3.

During the months of heated rhetorical shots fired over the fate of a ballpark development plan in the area of a historic slave auction, jail and burial ground in Shockoe Bottom, real shots have drawn blood and claimed lives in the city's modern-day burial grounds.

For years, you've seen and heard the passionate protests to save African-American heritage in the Bottom. Those protests led to the state deeding over a big chunk of land to the city for the African Burial Ground, and, more recently, helped stall Mayor Dwight Jones' signature plan for a massive redevelopment in the lowest section of the Bottom.

But where have been the protests to save all the African-American lives being ruined and ended today, right here, right now, in our racist concentration camps of poverty, misery and violence?

On June 1, a 23-month-old child was shot in the side on Harwood Street in the Hillside Court housing project in South Richmond.

Later in the day, a man was shot in the leg in the Mosby Court housing project across the river, just down the street from Martin Luther King Jr. Middle School.

Last month, a 5-year-old boy was winged by gunfire in the Whitcomb Court housing development.

And they were the lucky ones.

While the protests raged over the history in the Bottom, fatal shootings in the city's projects cut short the history of, among others, Robert Poag, 29, James Rousey Jr., 25, William Jackson, 22 and Jamel Cobb, 19.

Unlike most cities, Richmond has kept nearly all of its subsidized housing projects built in the '40s, '50s and '60s. We have six big ones — more, I believe, than any East Coast city. Gilpin Court alone is the largest project between Baltimore and Atlanta.

Opened in the spring of 1943 as the city's first "slum clearance project," it was named after stage actor Charles Sydney Gilpin, the Sidney Poitier of his time. It was home to what likely is the city's worst mass murder of children — the Oct. 14, 1994, massacre of a family of five by local crack dealer Chris "Pops" Goins.

For years, across this nation, these housing developments have been recognized as failed social experiments that pack single moms in drug- and crime-plagued barrackslike compounds in which illiteracy, illegitimacy, sexual abuse and poverty repeat over generations.

Most of you wouldn't allow your children to spend one minute there, let alone grow up there.

I remember going to a 911 ambulance call in the since-demolished Blackwell housing development for an 11-year-old girl who was having a problem with her pregnancy. She later delivered.

Recently, Jones said life in and out of the projects in the East End is "almost the tale of two cities."

"You see all this excitement in downtown Richmond," he told local media, "but just a few miles away you have concentrated poverty to levels that are just unacceptable. Something has to be done."

Even Washington and Chicago have torn these projects down in exchange for blended Section 8 housing that deconcentrates poverty, a proven solution.

The death, violence, abuse and, yes, modern-day slavery that radiate from these places continues to be an emergency situation that we continue to ignore.

Perhaps we should recall the old Willie Lynch manifesto on how to make a person bow to slavery.

According to legend, Willie Lynch was a British plantation owner in the West Indies who gave a slave-maintenance speech to Virginia colonists on the banks of the James River in 1712.

"In my bag here, I have a foolproof method for controlling your black slaves. I guarantee every one of you that if installed correctly, [it] will control the slaves for at least 300 years."

Lynch's instructions have been quoted by many, including Minister Louis Farrakhan during the first Million Man March, and by beltway sniper Lee Malvo during his rant about "white devils."

Slave families must be ripped apart and isolated, Lynch said. Slaves should be encouraged to fight amongst each other over differences such as skin color and origin. "I use fear, distrust and envy for control purposes," he said.

"The negro marriage unit" must be broken, so the children are raised only by the mothers to make them more pliable.

Withholding education also is critical, Lynch warned. "If you teach him all about your language, he will know all your secrets, and he is no more a slave. …"

Cultural isolation is the key, he said.

"Long 'Life' Expected for Gilpin Court," proclaimed the headline on a 1942 News Leader story about the project nearing completion.

Friends, that was 72 years ago.

As I've said before, every Virginian should be arrested and charged with contributing to child endangerment because our tax dollars go to herding our poorest black people — yes, the vast majority are blacks — into these concentration camps.

Do you really know why the city schools are a shame?

It isn't the buildings or the teachers.

It's too many kids coming to class who didn't have a good meal the morning or night before; who don't have both parents or even a stable place to sleep; who've looked out their own windows at sheet-draped bodies; who have a brother, sister or parent in jail or an early grave.

The three previous mayors have assured me that bettering the living conditions of the city's most impoverished families is a top priority.

At least Jones is trying. A new vision for Gilpin Court is on the table, as is the big East End redevelopment plan, which would demolish Whitcomb and Fairfield courts. But that plan took a hit in January when the city lost a bid for a half-million-dollar federal grant to advance the planning for the project.

No one lines up with signs demanding this heritage must be protected, that this racism and isolation must end, that we must do something now about these modern-day burial grounds.

There's no doubt we should fight to preserve Shockoe Bottom's huge and critical role in this nation's slave trade.

But can't we also rally, with that same energy and resolve, for our children trapped today in similar chains, practically within sight of all that awful history in the Bottom? S