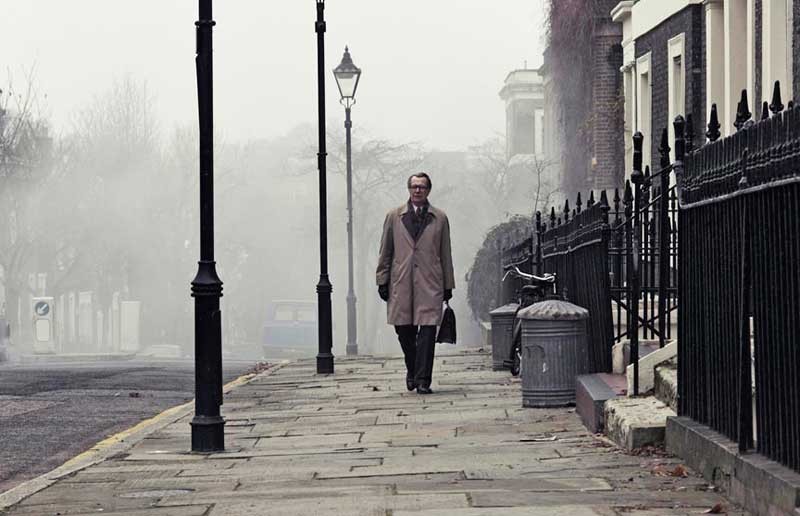 The latest Tom Cruise hit in the "Mission Impossible" series is half action-adventure film and half BMW ad. Recent television commercials for the two products blend them so thoroughly it's impossible to tell which one is a commercial for which.

You'll get none of that tomfoolery in "Tinker, Tailor, Soldier, Spy," a serious, somber, old-fashioned but entirely engrossing spy story set during the Cold War, when Russian, British and American agents really were — at least in the fiction that gripped readers of the day — strenuously striving to undermine each other's countries, sometimes with force, but more often with guile and deception. One thing they knew back then — which modern movie spies seem to have forgotten — is that the worst way to infiltrate another country without it knowing is to blow things up with fantastic explosions, or disrupt traffic in high-speed chases with glossy, new-model cars.

Alfredson's film is based upon a book by the great Cold War spy novelist John le Carré. "Tinker, Tailor, Soldier, Spy" is the fifth in the "Smiley" series, following "The Spy Who Came in from the Cold" and "The Looking Glass War," both previously adapted, with Richard Burton and Anthony Hopkins, respectively. In "Tinker," George Smiley (an unrecognizable Gary Oldman) loses his job at the Circus — the code name for the Secret Intelligence Service, or MI-6, England's version of the CIA — when an agent (Mark Strong) dies in the field, revealing "a leaky ship." Smiley and his boss, the agency's top man, known only as Control (John Hurt), are out, just like that. It all happens so fast, and it's nice that there's no expositional dialogue to overexplain, especially when code names are being used for code names, as in the case of the Circus.

Smiley soon is called back into secret action, however, when the governmental powers that ousted him realize they've accidently kicked out the good guys. Smiley's task is to spy on his old group and ferret out the mole among his oldest and closest colleagues — Bill (Colin Firth), Percy (Toby Jones) and Toby (David Dencik) — with the help of younger agents thought unlikely to have been turned. Part of the enjoyment of a movie like this is the setup, learning who has the power, who's in and who's out, and observing the protagonist establish his alternate agency in order to watch the watchmen so he can figure out which has gone over to the Russians. Maybe more than one has, maybe all of them. And don't think Smiley himself isn't being watched as well.

With so many people watching each other, even ordinary events take on a sense of danger and tension. Smiley's first act is to call upon a secretary also relieved of her duties in the same ouster, and we lean in to hear their conversation. What's being said is intricate and difficult to follow, but rewarding. The dialogue and plot in "Tinker" doesn't feel obligatory and unnecessarily convoluted, but slowly revealing, like a great mystery. Director Alfredson employs flashbacks and other jumps in time and distance just frequently enough to fill in the blanks without making things too meandering or showy. The movie helps you follow along, but inconspicuously, one necessary step at a time.

Emotionally, Alfredson takes his cue from Martin Ritt's 1965 le Carré film with Burton, turning in a bleak portrait of bleary-eyed, veteran spies kept upright long after World War II by nicotine and itchy-looking wool. His movie doesn't just recreate the 1970s, it feels like it was made during them, capturing the era's paranoia and guilt, along with whiffs of its malaise. We get the feeling throughout the picture that no matter which side seems to be winning, and no matter who we end up siding with, the struggle is doomed to go on forever. That also makes the ending the only unsatisfactory element. Oldman is fantastic as Smiley, and we follow his saga with fascination. But what do we take from it? Spies live and die and scheme, but their jobs go on forever. (R) 126 min. S