Live venues and musicians hold on for dear life.

There’s no award given for arts field hit hardest by the pandemic.

But if there were such a monstrosity, live music venues and musicians would certainly be in the running for a top prize. Due to their reliance on crowds, they were among the first to close and likely will be among the last to reopen.

With high overhead, nine out of 10 independent music venue owners say they are at serious risk of closing by year’s end without federal funding, according to a recent survey of the National Independent Venue Association, a 2,800-member advocacy group formed during the pandemic to seek federal aid.

Meanwhile Richmond’s plethora of working musicians has few places to play and no crowds – meaning reduced income for folks reliant on part-time wages.

Two bipartisan proposals that venue owners and musicians are watching include the Restart Act and the Save Our Stages Act, which would authorize the Small Business Administration to make grants eligible to live venue operators, producers, promoters and talent representatives.

“We did meet with Virginia Congressman [Donald] McEachin and he signed on as a co-sponsor for the Restart Act after the meeting,” says Jessica Gordon, promoter and co-owner of Broadberry Entertainment Group, which books several local venues. “Everyone is still basically just waiting to see if anything passes though.”

Most local concerts have been rescheduled for the spring or the fall 2021. Not much will happen indoors this fall. The National concert venue is owned by a multibillion-dollar company, AEG Live, so it has a better chance than most for making it through the downturn. Smaller local venues aren’t so lucky.

Lucas Fritz, owner of the Broadberry and Camel concert venues, says he’s been re-imagining uses of those spaces outside of traditional concerts, including closed-to-the-public video shoots or recording and practice opportunities for bands.

“It’s still just as difficult as it was in April, albeit now everyone is trying to get creative,” he says. “It’s pretty unclear at what point traditional indoor concerts are going to return. So letting our resources sit just seems silly.”

In Your Ear Studios has been doing a lot of live streaming as part of its #shockoesessionlive, including a recent gospel performance by the Legendary Ingramettes that honored evangelist Maggie Ingram. A local production and management company, Spacebomb Group, passed on questions about changes during the downturn, though it appears to be staying busy with various recording projects, recently promoting music by comedian Tim Heidecker.

Among the successful music adaptations so far have been the drive-in concerts that allow folks to watch concerts outdoors from their cars or seated in chairs right next to them. There is evidence that people want them: Shows with Keller Williams and Gwar recently sold out quickly.

“There’s not a lot of money in them. To turn a parking lot into a venue is extraordinarily expensive,” Gordon says. “The tents, generator, a million details, plus we have to bring a ton of security, even though people are seated at their cars.”

The group hasn’t had any problems so far, she says, but it has to stay that way. Due to the lack of income, the concerts are a way to make some money. They’re typically priced in terms of groups attending per vehicle and only last 75 minutes with no intermissions, which might encourage mingling and restroom visits.

“People are so thankful after these shows, they roll down their windows and yell ‘Thank you so much’ to us when leaving,” Gordon says. “It’s a way for us to have culture and some level of normality. People are really happy at the sold-out shows.” 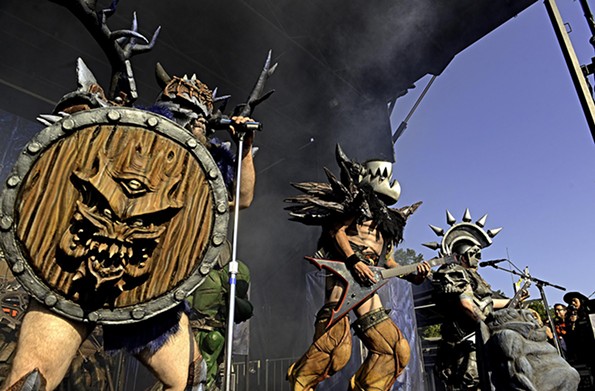 One would think that struggling local musicians would at least have time to write a bunch of new material, but it’s not that simple.

Nathan Grice of Big No says that when the pandemic started, he was writing a song a day almost – but with the constant deluge of bad news, creativity dried up.

“Worrying about a band seems so insignificant,” he says, considering the times. “I think this overwhelming panic of people with a soul – who feel for other people – it’s kind of crippling. … The idea of venues closing, great sound engineers leaving their jobs. Pretty soon all we’re gonna be left with is Starbucks.”

A former bandmate in San Francisco recently came to stay with him to escape the apocalyptic wildfires out West. Grice explains that some of his friends in bands make an OK living from touring, but without that, “they’re totally fucked.”

“Some have found jobs doing soundtrack work, but people who haven’t had a real job in 20 years? Most people I know aren’t above working at a grocery store to make ends meet. It’s just sad to think how long it will be until we all go to shows together.”

One of the best things Grice has done lately is play a 3-year-old’s birthday party in Forest Hill Park, accompanied by friend Josh Small. “Now we’re starting to get offers to play more gigs for 3-year-olds,” he says, laughing. “Which was awesome.”

Playing live music with his bandmates still offers a joyful respite, even without a clear goal or knowing what lies ahead.

“I just hope everyone can hold on to hope.”