by Chris Dovi and Scott Bass 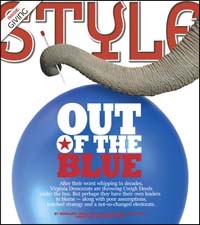 Pretty, young campaign staffers in prom-style gowns circulate among grim-faced, graying politicos in the grand ballroom of the Westin Richmond Hotel on Nov. 3, where the Virginia Democratic Party big wheels are sorting through the carnage.

Just a year ago, state Democrats were celebrating the unthinkable — Barack Obama's victory in Virginia, topping off seven years of liberal dominance in the state.

The Westin's lobby bar provides scant refuge for those too squeamish to watch Democratic worthies reporting on the party's body count Tuesday night. Reeling from the party's inability to gain traction in the three statewide races, they can't even manage the message on the bar's twin televisions. On one screen, a panel of talking heads on Fox News dissects Deeds' loss. On the other, NBC's “Biggest Loser” weight-loss show fills the space between news updates.

Back in the ballroom, party leaders make no pretense that this evening is about anything more than conceding. Bringing the process full circle, Warner gives the night's first concession speech, wishing the governor-elect, Bob McDonnell, well.

If election night was a train wreck, it was one that many longtime grassroots Democratic volunteers saw coming months ago.

“It was not unexpected,” says one Richmond-area campaigner, who signed up with Deeds before the July primaries. “But I had no idea it would be that much of a bloodbath.”

Many of those who worked for Deeds who agreed to talk to Style Weekly also asked to remain unnamed because of their close and continued affiliation with the party or other officeholders. There's no shortage among them of opinions on what went wrong during the campaign, but nearly all agree that it began early and the Deeds campaign seemed to do little to counter the decline.

And the biggest letdown he saw was the failure by the Deeds camp to ignite black voters. “Creigh's margin of victory could have — and should have — been made by African-Americans,” he says. “But African-Americans across the state were just not feeling it. There was just nothing that spoke to them — what my administration is going to do for you.”

It was worse than that, another longtime Democratic supporter says.

“The Democrats take our votes for granted,” says Arthur Almore, who has worked for Democratic candidates but sat this race out. “Why are we going out there to campaign for Deeds when Kaine hasn't come through for us?”

The Democrats' problems, however, run deeper. Even an energized black vote likely wouldn't have saved Deeds, who lost by more than 17 percentage points, nearly the same margin as Mary Sue Terry in 1993.

Most analysts point to the shift in independent votes: In 2008, independents were largely split, with 49 percent siding with Obama compared with John McCain's 48 percent. Exit polls show McDonnell won 62 percent of the independent vote, exacerbated by the low voter turnout of 39 percent. In the presidential campaign a year ago, 68 percent of eligible voters cast ballots.

It also didn't help that the Democrats never appeared to acknowledge or accept the shifting political winds.

Long before the Westin Hotel served as scene for a downer Deeds post-election prom, there was another party. It was held on a warm summertime evening at the home of a well-connected Richmond couple on Cherokee Road. The couple, which asked to remain anonymous, was hosting a Deeds meet-and-greet for potential big-money campaign supporters and volunteers.

Though the candidate's attendance was promised, Deeds never showed.

“They brought in a bunch of prominent people all based on the idea that Deeds would be there,” says a longtime party fundraiser who attended the event.

“It's kind of funky to go to a party expecting to get the gubernatorial candidate and you get a 19-year-old girl instead — wearing flip-flops. I don't know her exact age, but she was powerful young. It was quite disconcerting.”

In addition to her lack of proper footwear, she arrived without literature, bumper stickers or yard signs. “I was horrified when I saw her,” says a woman who attended the event. “The people who were there were well-known volunteers. Not only was it disappointing, it was embarrassing.”

Embarrassing or just plain unfathomable, the political ramifications of Deeds' sweeping loss go far beyond whether Gov. Kaine will remain chairman of the Democratic National Committee, whether Barack Obama's standing as a national party leader is threatened, or whether Republicans are given the opportunity to make even more sweeping gains during next year's elections for the House of Representatives.

Deeds ineffective campaign appears to have reignited a Republican comeback — Warner's budget-saving term as governor is a distant memory. Even Allen, the former macaca-hobbled U.S. senator and once-rumored presidential candidate, says he's considering running again in the near future.

“Our side was energized and motivated,” Allen says of the victory while he stands with his wife, Susan, behind the ballroom stage the downtown Richmond Marriott Hotel at McDonnell's victory party. “The political climate has really changed in the last five months.”