The Mill hits the holiday sweet spot with “South Division Street,” while VA Rep whiffs with “A Broadway Christmas.” 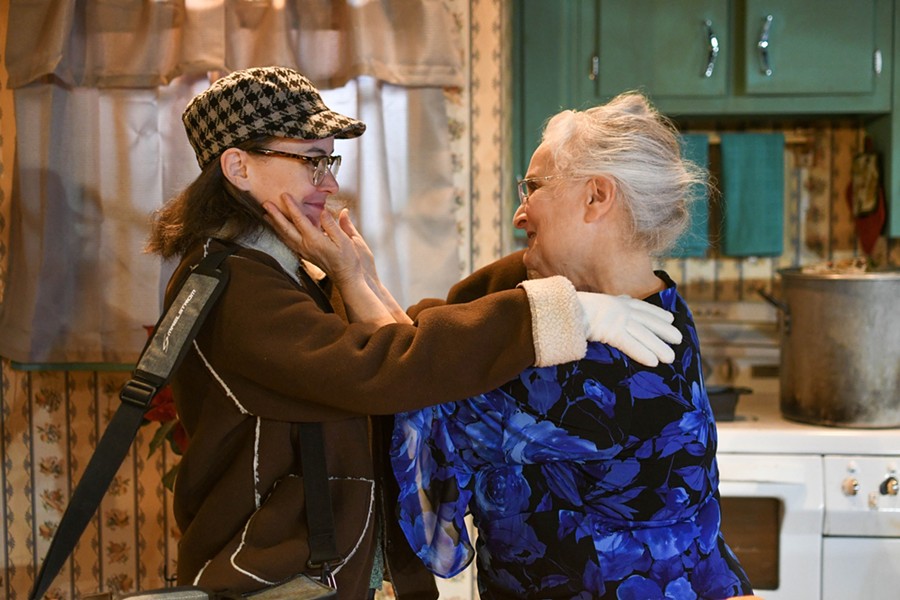 Curmudgeons like me won’t admit it, but most people want their hearts tugged this time of year. However, successful efforts to expose an audience’s emotions work best like Santa in the dark of night: sneaky, quick and light on their feet.

Swift Creek Mill’s “Miracle on South Division Street” deftly accomplishes that mission in a tight, intermission-free 90 minutes thanks to a clever script, skillful direction and a flawless performance at its core. Meanwhile, Virginia Rep is offering a valiant but messy misfire called “A Broadway Christmas” on its Hanover Tavern stage, a musical review peppered with a few transcendent moments in an otherwise confounding muddle.

“Miracle” tells the story of the Nowak family, working class Catholics who are the keepers of a shrine to the Virgin Mary, erected by their patriarch after the blessed mother appeared to him in his Buffalo barber shop. Jacqueline Jones plays Clara, whose father established the shrine in the 1950s and who remains devoted to its legacy, while her three children waver in their commitment. (The story is fictional but the 20-foot tall shrine still stands in Buffalo today.)

On Christmas Eve, 2010, the nervous Ruth (Audra Honaker) has called the family together to reveal what she says is the true story of the shrine, which she can barely do in the midst of interjections from sassy sister Beverly (Donna Marie Miller) and sarcastic brother Jimmy (Neal Gallini-Burdick). But once Ruth’s tale starts unfolding, revelations pour out that are both hilarious and heart-warming.

Honaker and Miller starred in the Virginia Rep/Tavern production of the same show five years ago and they slip into their roles like hands into warm woolen mittens. Honaker in particular does exceptional work, perfectly balancing her character’s anxious nerdiness, earnest affection for her family and resolute determination to complete her task.

She’s assisted by Tom Width’s insightful direction that precisely sets up the plot points in Tom Dudzick’s fast moving script like dominoes so they achieve maximum impact when they fall. I don’t know whether Ruth chugging an entire beer at a pivotal juncture is specified in the stage directions but it’s a great example of Width amplifying a scene’s already heightened emotions.

Jones uses her expert comic timing to score the show’s biggest laughs as Clara’s self-perception starts to wobble. Miller’s centered, skillful performance as the “bratty" sister makes a great counterpoint to Honaker’s. While Gallini-Burdick can’t quite compete with his castmate’s chops, he acquits himself sufficiently with his tossed off delivery of Jimmy’s asides.

Width’s spot-on set design gives the show a comfortably lived-in look and Joe Doran’s lighting design accents the proceedings expertly, particularly as the action heats up. “Miracle” even manages to effortlessly slip in messages of forgiveness and inclusion as it cascades uproariously along to its satisfying conclusion. 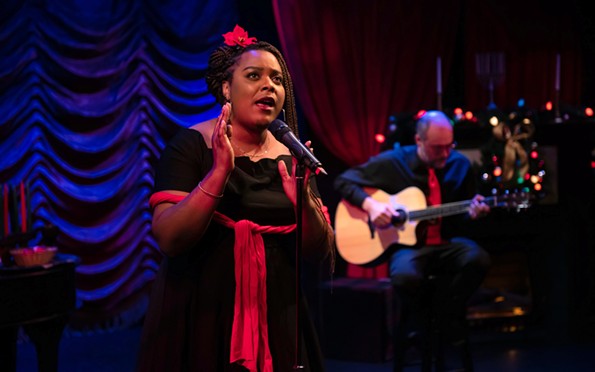 In contrast, “A Broadway Christmas” shoehorns callouts to Hanukkah and Kwanzaa into its slate of songs in a way that highlights how unfortunately unfocused it is. The musical review, curated by Jason Marks and directed by Irene Kuykendall, shows flashes of inspiration as an idea but ends up only occasionally engendering that holiday spirit.

The show seems to be offering a saccharin-free alternative to holiday sappiness when it spotlights unexpected and funny Broadway compositions like “Surabaya Santa” from “Songs For a New World” or “Never Fall in Love With An Elf” from “Elf: The Musical."

Unfortunately, torpid renditions of tunes like “White Christmas” blatantly try – and fail – to milk classics for emotional resonance. It doesn’t help that musical director Ryan Corbitt slows the tempo of some songs to a near crawl, making the two hour (with intermission) production seem to go on even longer.

The cast features a rotating company of performers plus one featured guest who brings two songs they specifically chose. At the performance I saw, Jessi Johnson Peterson brought down the house with the spiritual “Rise Up Shepherd and Follow” and her “Surabaya Santa” was a delight. The other performers (Emily Dandridge, Keydron Dunn, and Lindy Pokorny) gamely attempted to inject energy into the evening.

But, ultimately, the few sparks provided by Peterson don’t ignite into a bigger bonfire of good cheer. It’s surprising that, when it comes to these two shows at least, there’s more magic to be found on the streets of Buffalo than Broadway.