VCU has built a gem of a gym in Oregon Hill. 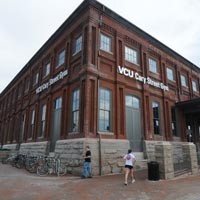 Although it's deep into the spring semester, the buzz continues at Virginia Commonwealth University among students, faculty and staff regarding the newly — no, make that radically and magnificently — expanded Cary Street Gym that was opened late last year.

Since VCU's humble beginnings in the early 1900s there's been a campus tradition of making do: Former townhouses, churches, warehouses, carriage barns and even a Ukrop's have been recycled. Until recently, one such building, a late-19th-century former public market turned city auditorium on West Cary Street, had done yeoman's duty as a fitness center and intramural gym. Two outdoor basketball courts hard against the eastern, Cherry Street side of the stolid red brick building enhanced the urban vibe.

Well, the Italianate former market building continues to do its duty, but a huge, handsome and intelligently L-shaped addition has been wrapped around the eastern and southern sides of the landmark to provide a combined 125,000 square feet of recreational fitness space. The marriage of old and new is so seamless it's difficult to believe this solution wasn't meant to be all along.

On closer inspection, however, the points where the 19th- and 21st-century structures meet are clear. Both on the exterior and interior the addition complements the noble old workhorse without dominating it. The team of architects and the university officials who tweaked the design have delivered a textbook case of how the old can become sparklingly new, while helping to reweave the humble but proud shards of the mixed-use neighborhood of Oregon Hill. Moseley Architects of Richmond and Virginia Beach were the lead architect for the overall project; Smith+McClane Architects of Richmond designed the exteriors; and Hastings+Chiverta Architects of St. Louis, Mo., were consultants.

The perfectly proportioned old market building, opened in 1891, was designed by Richmond City Engineer Wilfred E. Cutshaw. Its two-story building recalls similar structures in numerous western cities including Florence, Italy, Barcelona, Spain, and Washington which served prerefrigerator shoppers. Large doorways and ample, vertical window openings on the street level allowed for ease of movement plus light and ventilation for vendors and shoppers. The muscular brick and granite outside walls, however, give little hint of the richly industrial web of supporting steel that makes the interior remarkably airy. The verticality of the building's Italianate proportions rises to a crowning moment in the form of a rooftop monitor that channels light into the building via clerestory windows.

Gym rats enter from the western, Linden Street side of the building via a new loggia that announces the entry while not overwhelming the landmark. Upon entering the two-story vestibule you're oriented by views through a latticelike metal screen of the 18,000-square-foot fitness center with its iconic climbing wall. The reception area is a few steps to the right. The walls of this soaring two-story space have been painted brick red.

Anyone whose heart fails to leap at the sight of dozens of folks lifting, pumping, climbing or jogging in place should stay on the couch and glued to the television.

Leaving the fitness center, on either the ground or mezzanine levels, places you in an L-shaped passage that transitions between the original and new building.

On the eastern end of the facility, fronting Cary and Cherry streets, is a huge, brightly lighted space containing four adjacent basketball courts (convertible for volleyball, table tennis or badminton). On the surrounding balcony is a three-lane, rubber-surfaced running track. In this space, generous-sized windows connect indoor activities with the neighborhood. This is one of a number of things that makes this field house click — it's not a sealed space like too many high-school and college gyms.

On the south side of the new building, which houses the aquatics center and an indoor playing and practice field, the architects have stepped the structure down in deference to handsome old townhouses facing Idlewood Avenue. Here again, light fills the interior spaces.

While the old market building has a distinctive pitched roof that supports the monitor, the roof lines of the L-shaped addition (over the basketball courts and aquatic center, respectively) are gently curved. This successfully breaks up the massing of the building. 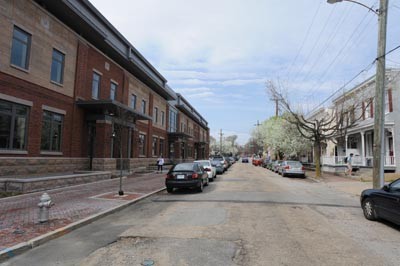 The Cherry Street side of the addition blends with the neighborhood.

One of the visual treats of the new gym is the Cherry Street facade on what ostensibly is the back of the building. Here the architects at Smith+McClane executed, with a highly deft touch, a facade that bridges a megalithic institutional building with modest century-old townhouses. In addition to a masterful blend of stone block, brick and steel accents, there are a series of three individual porches. These establish a rhythmic conversation with neighboring domestic-scaled buildings while being contemporary in design so as neither to mimic nor mirror.

This is an expansion solution that dignifies, enhances and raises the architectural class average of Oregon Hill. Despite the economy, the coming months will see groundbreaking for additional buildings at VCU's Monroe Park campus, including a large classroom building on Floyd Avenue and new dorms and parking decks on West Grace Street. The university and its architects have raised the bar at the Cary Street Gym. Let the miracles continue.