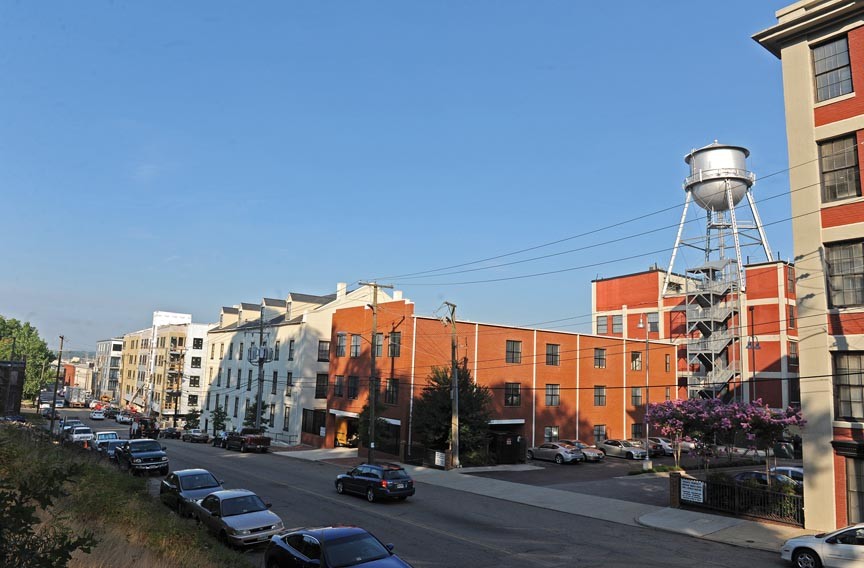 No local precinct has undergone so remarkable a transformation as Shockoe Bottom's eastern edge, where North 21st Street slams hard against the weed-infested and dramatically steep cliff of Church Hill.

In the recent past, aside from the restored American Tobacco Center apartments, the western side of the street was a forlorn stretch of parking lots and small commercial buildings. What's occurred suddenly is in-fill construction that stretches four blocks — from Broad to Main streets — of large apartment complexes.

OK, let's just say it: Architecturally, these new midrise buildings mostly are undistinguished (and in one case, god-awful). But as in-fill they provide much-needed urban density and establish intriguing architectural tension between two abutting but radically different districts. On the one hand, atop restored Church Hill, there's the human scale and understated elegance of mostly 19th-century structures. On the other, anchoring the Bottom like ballast, are solid and muscular warehouse-scaled buildings.

What the arrival of these new apartment buildings on 21st Street accomplishes architecturally is a revalidation of the city's original, 1737 street grid, which also reflects the Bottom's past as a manufacturing, tobacco processing and warehousing district. And while these residences — designed to attract a demographic range from graduate students to empty nesters — differ slightly architecturally, they share common features. Their respective footprints reach the city sidewalks, and the heights are a consistent four or five stories. Also, parking is incorporated within the structures' lower levels, and street-front commercial space is interwoven in two buildings.

Beginning at North 21st Street and East Broad, and moving southward along 21st, the 2001 East Apartments, designed by Winks & Snowa Architects, fills the 2001 block on the south side of Broad. The 74-unit complex, with retail space at ground level, rises with the topography, stepping up gradually from west to east. 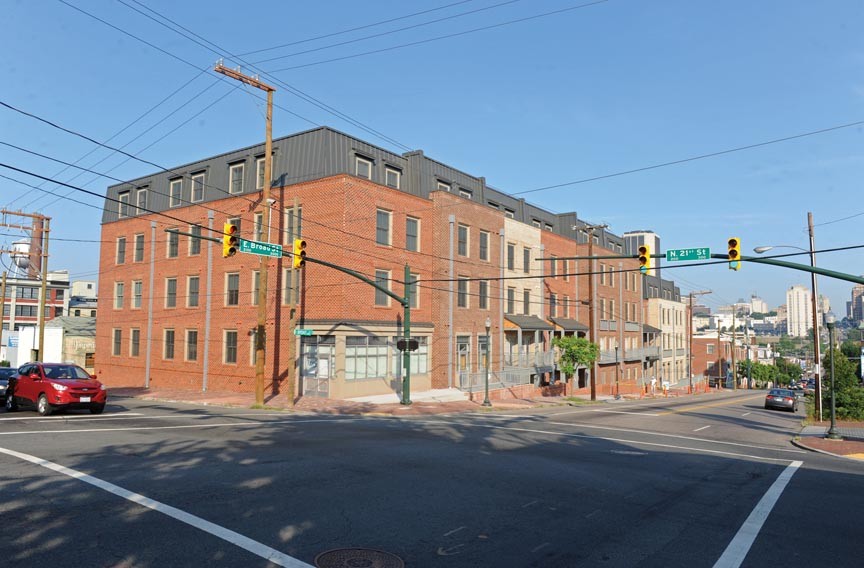 While the 10-bay, multihued brick facade was designed to establish architectural context with the rhythm of nearby 19th-century houses, this attempt to meld vernacular warehouse scale with domestic-scaled detailing proves dreadfully ham-handed. The building has a top-heavy mansard roof that's reminiscent of bad 1970s brutalism (hideous then and inexcusable now). But things get worse with the grab bag of decorative add-ons. There's a mere stub of a mansard overhang at the eastern end of the building and goofy, faux railings applied like Post-it Notes. One astute observer called the 2001 East Apartments: "Gulag meets ooh la la." With our city's deep reserves of architecturally significant buildings as constant reminders of excellence in the classical idiom, developers and architects shouldn't attempt traditional design unless they can pull it off.

Moving southward along 21st Street, the handsome, 58-unit Dill Building complex at 21st and Franklin, designed by Walter Parks Architect, is a textbook example of how to allow a historic architectural star to shine with a low-key supporting cast. Here, the two-story remains of an 1854 tobacco warehouse were restored to a full height of four stories with dormers and a pediment at the attic to create a silhouette of an antebellum warehouse. On both its western and northern sides the original building was expanded intelligently with two crisp, modernistic, red brick additions which are wisely set off by glass hyphens.

Crossing East Franklin Street you confront the largest of the new complexes along 21st: the 96-unit Old Stone Row (also designed by Walter Parks). The five-story, U-shaped structure — it wraps around an 18th-century Jewish cemetery — has a facade consisting of panels of shiny aluminum siding alternating with surfaces painted a rich, brick-red color. A rough-cut granite tower rises dramatically to anchor the western end of the modernistic building. This element, however, might have been more effective at the pivotal eastern corner of the building at 21st and Franklin streets, which is underdetailed.

Just south of Old Stone Row is another Walter Parks-designed project, the 25-unit Engine Co. Lofts. Some interesting things happen here because the development plays off two pre-existing old buildings. One of these is Engine Co. No. 2, an 1899 fire station that's situated midblock on Main. Restored as a restaurant, the station has a dramatic, enclosed, rounded arch that thrusts up into a stepped gable. It's reminiscent of a late-Renaissance-era canal house in Amsterdam.

Adjacent to the east of the old firehouse was a modest-sized brick commercial structure that's been expanded with a four-story, gray metal-clad addition containing apartments and perforated with balconies. A liquor store occupies the ground floor retail space.

Despite some architectural missteps, these ambitious residential projects signify a major step in replanting a neighborhood where past generations imposed demolition. These apartment buildings also validate the Herculean preservation efforts, begun in the late 1950s, to restore once-dilapidated Church Hill. With that historic neighborhood's successful renewal, things on its periphery have been invigorated, including Tobacco Row, Fulton Hill, North Church Hill and Union Hill. But Shockoe Bottom was the slowest to make a comeback.

It had strikes against it — an interstate highway, railroad tracks, occasional flooding and loud nightlife. But the Bottom also contains some irreplaceable architectural landmarks, our oldest marketplace and intriguing graves. What was lacking was a solid residential base. The urban wall of apartments on North 21st makes a dramatic contribution in filling that gap. S