A new exhibit chronicles a black perspective on American history. 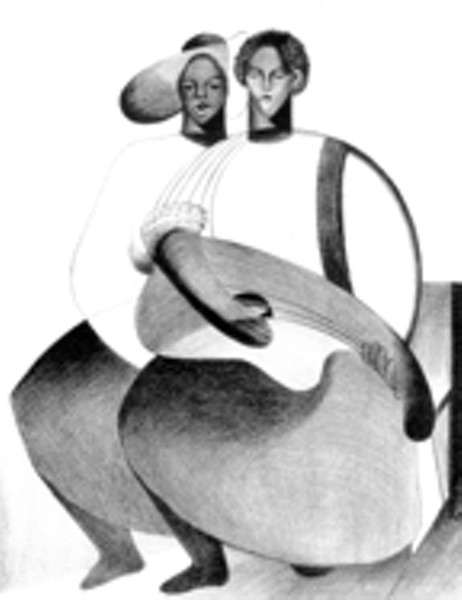 The subject of work figures heavily in this show, which paints the jobs historically available to black people as void of opportunity and reward. The America in these images appears to have been built by black people whose physical and social struggles are commemorated in wrinkled brows and bent backs.

Allan Freelon’s “Road Menders,” a print made in 1935, portrays three laborers at work with a pick, jackhammer and shovel. Thirty years later John Biggers made “Morning is Here, No Dawn” in which a male figure buries his face into large working hands. And in Jacob Lawrence’s “Carpenters” (1977), physical labor defines the black man’s purpose. As Biggers’ title and the number of menial laborers represented in this exhibition suggests, dawn is a long time coming.

But in every instance, the hardy nature of these workers, male or female, appears to represent an inner resolve that wards off deterioration of the spirit. Lawrence’s working carpenters offer a fine example of how artists in this collection intelligently balance sweat with grace and pride. Contrasting the muscle of his hulking subjects with their graceful poses at their sawhorses, Lawrence makes a connection between labor and a prayerlike meditation.

“Carpenters” also exemplifies why the Kelleys have formed such a cohesive collection of art. The pieces are not only didactic, but formally successful time after time. This is a collection for art students to study carefully because it is laden with masterful rendering and composition.

As if the heroic style of Depression set the tone for years to come, each black figure represented in this collection seems larger-than-life. A number of images present heroic figures who prevail because of their ability to transcend burdens with determination, humor and faith. Sprinkled throughout the collection are scenes of jitterbug dancers, preachers and entertainers whose spirits have risen above their daily trials.

One of the most entrancing images in the collection is a black-and-white lithograph by Calvin Burnett. In “The Juggler,” (1941-1942) the surroundings seem to freeze while four balls spin hypnotically about a single male figure. Burnett captures both the sense of suspension and movement — making such a feat seem effortless — with fluid, gestural lines that echo like sound waves. His subject handles the spheres like a Greek god juggling the planets; he is, for the moment, all-powerful. S

“African American Works on Paper” is on display at the Black History Museum and Cultural Center through March 28.