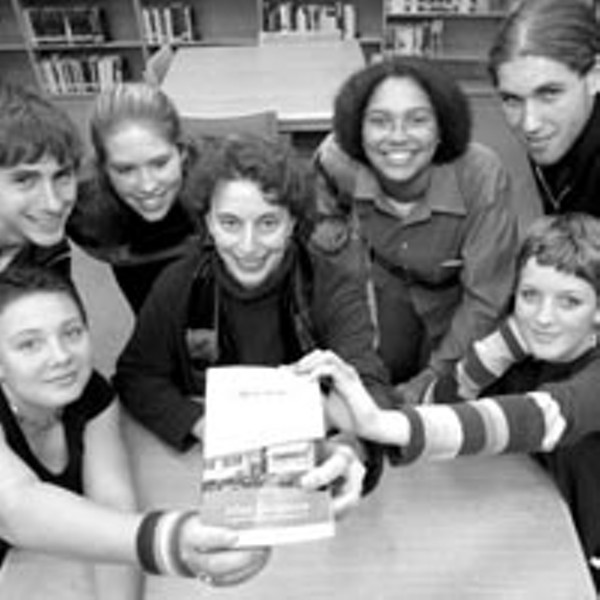 Of almost 2,000 students attending the school, the GSA comprises some 20 members, about half of whom are gay. The first of its kind in Chesterfield County, the group formed in 2000 under the leadership of the James River High School's head librarian, Ann Reinke.

Reinke, also a member of the panel that chose "White People" as this year's Go Read Richmond book, says the panel looked for a book by a living author that would speak to the community and spark discussion. So far, "White People" has done just that.

In their reading of "Minor Heroism," a story about a military man's relationship with his gay son, GSA members recognized that their quest to promote understanding is a two-way street. Alliance President Aidan Grennell, a junior, says "It was good to see the opposite side, from the point of view of the father."

In an issue that can divide families, schools, communities and political campaigns, "some people who act really open-minded aren't when it comes to their own kid," says Griffin Waltzinger, a senior and vice president of the GSA. "They think you need medication instead of a hug."

Much like the son in "Minor Heroism," some members of the GSA have had a difficult time finding acceptance in their own homes. "But we're a close-knit group," says Allyson Hagen, a sophomore and GSA treasurer. "We offer each other support in and outside of the club."

Despite the encouragement of their principal and growing acceptance from the teachers and the student body at James River High School, Reinke says that the GSA cannot yet pretend to be problem-free. Students are still called names or discriminated against. In May of 2004, in an effort to raise awareness of prejudice and hate crimes, Reinke recruited Rob Peck, cousin of the Wyoming teenager Matthew Shepard who was brutally murdered in 1998, to speak to the school.

This year, author Allan Gurganus is scheduled to speak at James River High School on Nov. 11. "I think they are pioneers," says Gurganus of the JRHS Gay Straight Alliance. "The thing that's hard for people to realize is there's always been an unacknowledged GSA, but it's great to have it recognized. Chances are the boys who started decorating the gym for prom were the first GSA."

Gurganus, a gay North Carolina native who often uses Richmond as a classic Southern setting, has written many highly acclaimed short stories and novels that focus on issues of race, class and sexuality. He maintains that "White People" is not just a book about coming out of the closet.

"It could just as easily be read by a black high school or at a bridge party. But obviously sexuality is very important to me, otherwise I wouldn't have put my head on the chopping block so many times," Gurganus says. "That's why I'm working for change and why I respect these kids so much. It takes a very brave person to come forward and reveal themselves for a punishable quality that could otherwise be disguised. If more gay people in public life would come forward and say 'Yes, that's me,' it would make it easier for the young people who are struggling in their hearts to not feel alone in the world."

Until that time, a small group of dedicated students at James River High School is already leading the way. S

Author Allan Gurganus will give a community reading and discussion at St. Paul's Episcopal Church, 815 E. Grace St. on Thursday, Nov.11 , at 6 p.m. Barnes & Noble will host a book fair from Saturday, Nov. 6, to Thursday, Nov. 11, in which a portion of all proceeds from "White People" will benefit Go Read Richmond.