Special/Signature Issues » The State of the Plate 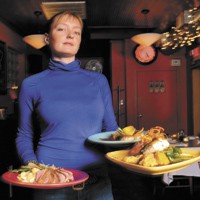 No restaurant can be all things to all critics -- or rarely so — and the variables of place, taste and service can make a standout for one person fall flat for another. Some promising newcomers to the area — Si Tapas, Café Rustica, Ironhorse, Verbena and LuLu's — made big impressions this year, not just on us but on those diners ever stalking the new thing. But why toast an infant when the true beauty is almost old enough to lift a glass with you?

After much deliberation, our critics' choice is Millie's Diner, because not only is the duck with foie gras mac and cheese with orecchiette astounding, but also the place represents a passion that's truer than any trend.

The folks at Millie's "exemplify that steadiness of craft, that Cal Ripken devotion to playing the game well, all the best, in good time for the long haul," critic Joseph Cates says. "They just keep ringing the bell all shift long."

But then, they don't seem to worry much about getting noticed anymore, if the rumor that they turned down being featured on the Food Network's "Diners, Drive-Ins and Dives" is true. Age has its advantages.

And while naming a veteran may seem unfair, it's difficult to overlook this year because Millie's has finally taken a step into expansion. With the advent of LuLu's, we see Millie's reach a maturity: a great place that doesn't lose its balance with the weight of its offspring. And just as Millie's is an anchor for the beginning of the East End (and, soon, Rocketts Landing), LuLu's has become a culinary magnet for the Bottom.

That LuLu's is such an instant success (as soon as liquor arrived) is a testament to how completely this restaurant "family" or "collective of personalities" has it together, Cates says. "And it's always low-key on the service side, no matter how busy it is."

"I remember Millie's when it was a tiny five-table spot on the way to Fulton Bottom. Lots of people I knew worked there, and although I was appalled that salads didn't come with the meal, back then, menu prices were just within the range people in their 20s could afford. It became the perfect place to go on a Wednesday if you didn't mind waiting for an hour or so, because just down the street at the Flood Zone, Dave Matthews had a weekly gig, playing for free (doesn't that just boggle the mind?).

"The food was spectacular, inventive, creative, insert effusive adjective here. And it still is. They've still got it. It's astounding that a place that's been around for so long not only turns out food this consistently good, but food that stays relevant and current, always surfing the crest of the trend, without frivolously succumbing to the trend — to the detriment of diners. Millie's is the author of the gourmet-diner conceit here and the one which first thought of the creative space that might open up within the distance engendered by ironically yoking together two words, 'gourmet' and 'diner.'

"Not everyone else can pull off such a mishmash of culinary styles on a single menu; unfortunately, lots of places try. If Millie's has a downside, it's that it has inspired unrealistic ambitions in less-talented chefs. Asian to Mexican by way of France with a dollop of Italy can be a tragic thing to witness on a menu. It makes most restaurants look like they've got a bad case of ADHD. It works at Millie's because, despite changing chefs through the years, the owners seem to have an uncanny ability to choose ones who know better than to overplay their hand. And that, to those of us who like to eat in Richmond, is the precious gift of experience."

And where else in town do your ears rate the same devotion as your tastebuds? Where does a wait-staff of artists and musicians work more skillfully to make you feel invited to the party? The workers at Millie's, whether they're 19 or 55, tune in to sound the same subtle way they train in flavor.

"The goal is always to have the music be as unique as the food," says longtime server/musician Chris Bopst, who stacks an ever-changing jukebox from maybe 5,000 singles in his own collection and that of owner Paul Keevil. "The vast majority of people there are music freaks," Bopst says. "We talk about the music as much as we talk about the menu. We put on stuff that is rare in the hopes that not only would we tickle the palate but also the ear, to turn people on to different things."

If they're serving Asian or Indian, they'll hand-load each 80-slot Wall-O-Matic with a few obscure titles of Bollywood or Japanese singles. It's quite a process but worth every hour, saving the staff's sanity by "not ever having to hear 'Mustang Sally' or too much of anything," Bopst says. "When was the last time you went in anywhere that had a working jukebox, let alone The Clash or Patsy Cline or Cal Tjader? That's a labor of love, a reflection of the food we serve. We want to be purveyors of culture."

And at least partially because of that, Millie's has been adopted by a city still eager, almost 20 years later, to squeeze in for a menu that changes every three weeks and a patina that doesn't. You're likely to see other chefs eating there or copping ideas. It's where critics take their friends and their mothers and, as in Cates' case, beg for an assignment to review it. Again.

"It's so small and intimate, you're aware, whether you want to be or not, of controlled chaos. It's like a dance — 'scuse me, 'scuse me," Bopst says. "It has one of the great rules of a restaurant — it's better to be too small than too big. The space is extremely finite." And, to us, resoundingly fine. S

The State of the Plate