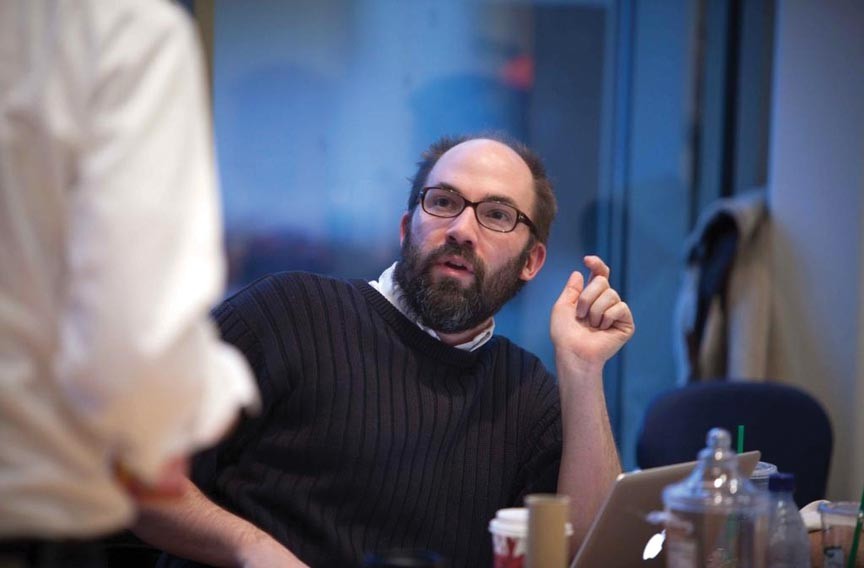 "Let's just get this out of the way up front: I totally did not burn down my last school." So began Clay McLeod Chapman's wild-eyed, toe-bouncing reading May 16 at Robious Middle School.

Naturally, the students assumed Chapman did.

The whispers flew: The guy who set the school on fire in 2011 wrote a book about it! Not only that, but he dared to come back to Robious and read it.

Chapman and administrators swiftly set the record straight: He totally, seriously, did not burn down the school. Robert W. Altizer pleaded guilty to that arson, which caused more than $2 million in damage, in 2012.

But the author's experiences at Robious did inspire "The Tribe: Homeroom Headhunters," his new middle-grade novel. "I was a pretty terrible student," Chapman says, "and my imagination usually hijacked whatever lesson plan was happening." One day in class, he heard a "shifting sound" above the ceiling panels over his desk. He began to wonder: What — or who — was up there?

His new book is a story about a misfit 13-year-old boy, Spencer Pendleton, who discovers a gang of lawless "eternal middle schoolers" — the Tribe — secretly living in his school. Its members are watching him, and they want him to become their newest member.

If you know anything about Chapman, it will seem quite strange that he's writing for young readers. His other books — novel "Miss Corpus" and short-story collection "Rest Area" — are rife with death, decay and dark humor. His long-running "Pumpkin Pie Show," a series of staged storytelling sessions, inevitably unsettles his audience. And his new project, "Henley," a feature film that Chapman co-wrote with Craig Macneill, is about the first murderous forays of a 9-year-old sociopath. It's being produced for the screen by actor Elijah Wood of "Lord of The Rings" fame.

Yet the first version of "Homeroom Headhunters" was fairly PG, Chapman says. His editor told him "Go further," so he did. The book begins with a literal bang, draping a teacher in "tendrils of frog intestine." The Tribe fashions spears from yardsticks and compasses and knives from X-Acto blades and protractors.

Why pretend young readers don't have dark fantasies? Chapman asks. "I think it's better to acknowledge them and talk about them and think about them, rather than tamp them down."

In "Homeroom Headhunters," Spencer's nemesis is Riley Callahan, a bully who favors classic humiliations such as the toilet swirly. Chapman didn't write the book specifically to address the topic of bullying, he says, and he isn't trying to offer a solution. "For me, it was more a matter of saying, 'You're not alone.' If you're a kid who's been bullied or teased, you're not the only one."

In eighth grade, a classmate challenged Chapman to a fight. It was to be Friday night behind the 17th Street Surf Shop at Chesterfield Towne Center. He dreaded it for days. That evening, two sympathetic friends took Chapman to see mediocre horror movie "Gate 2: the Trespassers" to distract him from the impending beat-down.

A ring of other students was waiting to watch the fight. Chapman's challenger had a roll of pennies in his fist to give his punches more pow. It was a cinematic and terrifying moment — but it turned out that the bully didn't want to be there any more than Chapman did. They circled each other until an older boy shoved them together. The two wrestled ineffectually until the onlookers got bored.

In middle school, some things never change. Others do. Chapman was shocked to learn that his old school is now peppered with security cameras. Yet they don't stop bullying, kids told him. "Whoever these bullies are," Chapman observes, "they're either savvy enough to know where they can bully, where they can get away with it — or no one's going to pay attention."

Chapman's working on the next book in "The Tribe" trilogy, which follows Spencer to a summer camp for troublemakers. He's also been writing a few Spider-Man and Avengers issues for Marvel Comics. "If the 13-year-old me knew what the 35-year-old me was up to," he says, "he'd be proud." S