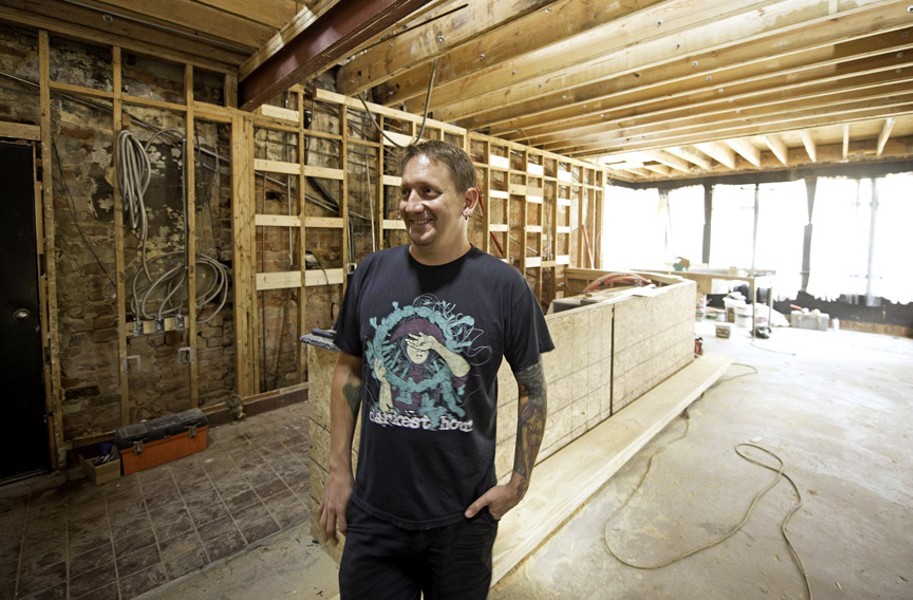 Scott Elmquist There is a benefit this weekend to help with the recovery fund for guitarist Michael Derks, also known as Balsac the Jaws of Death in Gwar. He’s shown here during the building of Gwar Bar in Jackson Ward a few years ago.

You might not know Mike Derks' real face, but you know his guitar playing and maybe his alter ego. Better known as Balsac the Jaws of Death in Richmond's favorite alien sons, Gwar, Derks is the shredder behind the mask.

Last summer, while on a massive tour with Gwar, he got sick. Brad Roberts, Gwar's drummer who goes by Jizmak Da Gusha on stage, says the guitarist was starting to feel lethargic and his skin turned yellow, which was weird considering the band's preferred fluid spray colors are blue and red.

They rushed him to a local hospital where he was diagnosed with myelofibrosis, a rare blood disease. He was sent home to Richmond where he's since received a bone marrow transplant and continues treatment.

"I'm recovering faster than I would expect," Derks tells Style. "I don't seem to have had any of the complications I could have faced."

It's been a few months since his treatments began, and even though he's quarantined at home, that hasn't stopped him from helping plan Gwar's 2018 fall tour. Roberts said Derks has gone as far as video conferencing for band meetings. "He's fully active, he's just gotta be the boy in the bubble for a bit because he's got no immune system right now," Roberts says.

But as his body recovers, the costs are building up. So friends are getting together to hold a benefit concert at Champion Brewing this weekend.

The daylong event features local metal heads Bat as well as Druglord, Murdersome and Loud Night. The folks at Cigar City Brewing, who make Gwar's beer for the semiannual Gwar-BQ, have teamed up with Champion to play host to the fundraiser with all the proceeds going towards Derks' recovery fund.

"Gwar laid the groundwork for so much of the metal and arts community in Virginia and Richmond in particular," says Hunter Smith, owner and founder of Champion Brewing. "It's only obvious that those who have benefited from the growth they've contributed should help out when we can."

There's also a mess of raffle prizes and silent auction items for those who want something extra special to take home that day. But for Roberts, it's more about getting his friend and nearly lifelong band mate back to full health.

"He's an essential piece and an original member of Gwar," Roberts says.

He remembers meeting Derks back in the '80s when the two were in different punk bands. They'd share stages at Twisters or the Jade Elephant, as well as practice spaces around town. "The Gwar sound really comes from Derks, because of his landscaping-style of guitar playing and no one else sounds like that," he says. "I've been fortunate to be able to play music with him for 30 years now."

For Derks, the whole experience has been rough, but he's glad to see so much support come from fans and those around town. He even started a blog to offer medical updates as he continues to regain strength.

"It's a little weird for me, I'm a pretty private person," he says, noting he spends his time on stage behind a mask. "But there were so many people [asking about me] it was a lot easier to have that out there."

Flipping through old posts you can read about the highs and lows of his treatment, including his fears the night before a transplant to the few weeks later when he longs to return to a normal diet.

After Derks' diagnosis, his bandmates stepped up to do what they could. Finding a bone marrow donor is nearly impossible, so the band worked with Love Hope Strength and offered cheek swab testing at shows to help add folks to the registry. The idea worked and the band, known for their devotion to destroying and enslaving Earth, became the largest donor recruiter in the organization's history.

Love Hope Strength will be on-site during Saturday's event as well so you can not only help out Derks by buying beer, you can also get yourself on the donor list and help out someone else in need. S

A Benefit for and Celebration of Michael "Balsac" Derks happens Saturday, April 7, from 1 to 10 p.m. at Champion Brewing. Entry is free, raffles start at 4 and go all night.