Meta to the Max

In Triangle Players' [title of show], the play's the thing. 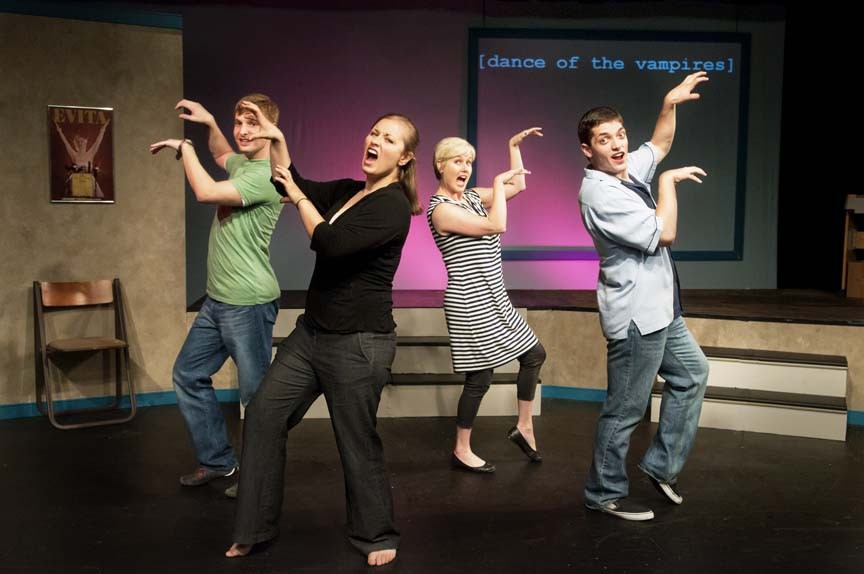 It would be a tragedy if people think Richmond Triangle Players' insider-joke-filled, meta-musical, "[title of show]" is strictly for theater geeks. Sure, this thoroughly entertaining, tuneful, and exuberant romp gets a lot of its juice from its self-reflective adoration of Broadway. But even a stage novice will enjoy the authentic characters, the steady stream of clever dialogue, and the conceptual craziness that makes this show a winner from start to finish.

An invitation to enter an original script for a theater festival inspires playwright Hunter (Daniel Cimo) and composer Jeff (Chris Hester) to write a musical about the process of writing a musical. "Title of show" is the first question on the festival application. The tricky — and fun — part is that you in the audience already are watching that musical unfold. The two boys bring their friends, Susan (Lanaya Burnette) and Heidi (Georgia Rogers Farmer), into the creative process, in effect making them characters in the show. The show-about-itself references just keep getting nuttier as their onstage accompanist, Larry (musical director Timothy Brewster), eventually is insinuated into the action.

Instead of somehow getting bogged down in the show's meta-theatrical conceit, director Justin Amellio spurs his cast to create a real esprit de corps among these stage-centric characters. This focus pays off as the show reaches beyond the Donuts for Dinner syndrome, becoming more than a sweet-but-unsatisfying treat with the emergence of second-act creative differences and Farmer's flawless delivery of the bittersweet show-shopper, "A Way Back to Then."

Farmer is the vocal star here but her castmates are no slouches. Burnette has a blast with the theatrical "Die, Vampire, Die" while Cimo and Hester's voices blend wonderfully from the very beginning, the appropriately named "Untitled Opening Number." Cimo shines as the cattier of the two boys with Hester's voice-of-reason demeanor never hiding his boyish enthusiasm.

The multilevel set by David Allan Ballas is simple but effective while providing a nice foundation for amusing projections by lighting designer K. Jenna Ferree. "[Title of show]" may be wrapped up in itself but navel gazing has never been so much fun. S