Message in a Pothole

In the long run, potholes may let us see how vulnerable our silly choices for developing the metro area have been. 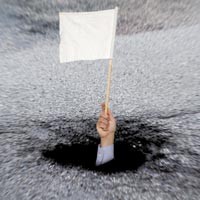 I've hit my share of potholes since this seasonably normal winter began. Yes, let that fact sink in for a few moments. Temperatures have been at or just below our historic averages. Add some real snowfall to that, a rarity in Richmond nowadays, and our roads are falling apart faster than the housing market.

So I'm going to rise to the defense of the lowly pothole. It provides a perfect symbol of the transportation woes besetting our state.

But first, the silver lining. In the very short run, potholes make us more civil. Richmond's potholes come in all forms, but I'm fondest of the ones so deep that overworked repair crews mark them, like landmines to be cleared later, with orange cones or barrels. Traffic slows, and civility usually reigns. Even harried commuters in enormous sport utility vehicles gingerly avoid abysses their vehicles were made to conquer. They smile and wave me on, and I smile back, insisting: “Go first please. Though I hate your stupid panic room on wheels, you must be a nice person.”

In the long run, potholes may let us see how vulnerable our silly choices for developing the metro area have been. While the pressure on our roads increased, the number of stopgap repairs blossomed on the fragile layer of asphalt whisking commuters and commerce along. Broad Street west of me looks like an art project done with melted inner tubes, where new asphalt has been sprayed into the spider web of a disintegrating roadbed. This effect is lovely on ancient potsherds put together in the Virginia Museum. On the street, it seems ominous. Elsewhere, scabs of old patches skulk into the light whenever potholes appear. Because I walk and bike to work most days, I pause — have to pause — to see geological strata of make-do patching in the depths, many repairs back in time.

I was lucky enough to see my street fully mended with a cold-seal process that penetrates enough to bond to the old road below, but I really doubt that it will hold up very long. The side street, done the year before, is already crumbling.

It begins with potholes, but where will it end?

In Oliver Wendell Holmes' poem, “The Deacon's Masterpiece,” a churchman in the year 1775 gets a perfect carriage made from the finest materials. There's a catch: The marvelous one-horse shay has been built to last exactly one hundred years.

You see, of course, if you're not a dunce,
How it went to pieces all at once,
All at once, and nothing first,
Just as bubbles do when they burst.

The recent financial bubble has burst; oddly, in that time of seeming largesse we dodged long-term municipal planning while we built trophy houses farther and farther from town. We made no concerted effort to get more heavy freight onto rails and off the highways. Now we must pay or put up with the deacon's fate, left sitting on a rock amid the ruins of a once-fine system of transportation.

Solutions will be expensive and elusive in an era when government at all levels is fiscally bankrupt and the two brawling brats of our political system — I mean our august political parties — cannot see beyond the next election. Whoever prevails in the 2010 midterms, in a time of reduced government outlays and a nearly maniac resistance to new taxes, the preferred big-government solution of massive highway spending seems ever more utopian. I'd personally love high-speed trains, light rail and so-called smart roads, a dream system first presented to the public at the 1939 New York World's Fair.

I remind readers that I also was promised a personal jetpack in the 1960s.

If abundance returns to the levels of the late 1990s, we can discuss high-tech transportation marvels again, just as we would a mission to Mars. In the interim, given the black hole of governmental finances, gaping at us like countless potholes, I devised some cheapskate solutions. My painstakingly researched options came to me while waiting at a bus stop and dodging splashes from, yes, a particularly malicious pothole.

We might just return a lot of secondary roads to gravel, ripping up roadbed and running a grader down the street every year. If residents want it better than that, they'd work with local and state governments to levy tolls, as their ancestors did in the deacon's day. Want to drive down Monument Avenue if you don't live there? That would be 50 cents, please. Otherwise, residents would have to fix their roads themselves, as I do the right-of-way to our family farm. Pothole? Bucket of gravel. Lots of big potholes? Fire up the backhoe, make a pass, come back with shovels and rakes. Repeat with regularity.

Further from the libertarian end of the spectrum, but with a carrot such people might bite, we could replace gasoline and car taxes with a road-use fee levied after every annual vehicle inspection. With fees rising by miles driven annually and vehicular curb weights, this idea would encourage combining errands, carpooling and suffering fewer superduty pickups urban cowboys use for daily commutes. Businesses hauling freight likewise would be encouraged to ship by rail, with heavy vehicles subject to road-use fees only for the final miles from rail yard to destination.

Moving more toward a statist approach, we could develop a set of incentives better than high-occupancy lanes or light rail. Instead, provide tax incentives to companies that document a certain percentage of workers using registered carpools, company-supplied bus passes, bikes or their own two feet. The smallest businesses could cooperate with others nearby to reach targets.

All three ideas aim to reduce traffic density. We might then be able to keep the potholes filled so our one-horse shays, and the roads that support them, do not rattle apart. My pessimistic bet is that we'll keep patching and hoping, until the system utterly collapses with a wake-up call such as the Huguenot Bridge falling into the James River.

Meanwhile, drivers gripping the wheels (while shaving, sipping or texting) seem to want good roads without paying enough for them. So if you want to see the real culprits in this regional drama, look into a pothole filled with water.

It makes a lovely mirror.