In 1972, the radically conservative Richmond Times-Dispatch, the Richmond News Leader, and the virulent segregationist reputation they had championed on their editorial pages dominated Central Virginia’s print media landscape.

Aware of this dominance, a group of Harvard and University of Virginia-educated Richmond natives became convinced the city could benefit from another voice.

“We had strong goals, a clear target, and a wonderful antagonist in the complacent Richmond dailies,” recalled Glenn Frankel, who worked as a writer from 1973-1975, and would later win a Pulitzer for international reporting with The Washington Post. “We had a great town to work in, with larger-than-life personalities and a facade of gentility and political etiquette covering an underworld of cut-throat, back-room politics and race hatred.”

In an early issue, a letter from the editors noted: “After our collegiate years, we were left with a shared belief that Richmond was a good place to live and the common hope that we might keep it that way, perhaps make it a little better. Richmond in the early 1970s – like the rest of America – still faces a struggle for social and economic justice … The split between the races needs to be healed and Richmond’s large black population must be given the opportunities in education, business and society that have been denied to them for so long.”

The Mercury initially suffered an image problem as Richmonders perceived it as just another ‘underground’ paper when it arrived less than a year after the folding of the more radical Richmond Chronicle, which was published from 1969 to 1971. The two differed in that the Chronicle, with its volunteer army of offbeat amateur writers and artists, espoused the underground ethos through rejection of the establishment. The Mercury, in marked contrast, was founded by Ivy League journalism graduates looking not to reject or even replace the mainstream media, but to fearlessly augment it with a “more adventuresome kind of writing, real in-depth, investigative reporting,” according to co-founder Epps, now the legal affairs editor at The Washington Monthly.

Epps explains that their publishing models were the Boston Phoenix and the Cambridge-based, The Real Paper, two wildly successful alternative weeklies. They named their paper after H.L. Mencken’s 1920s-era humor and commentary magazine, The American Mercury. 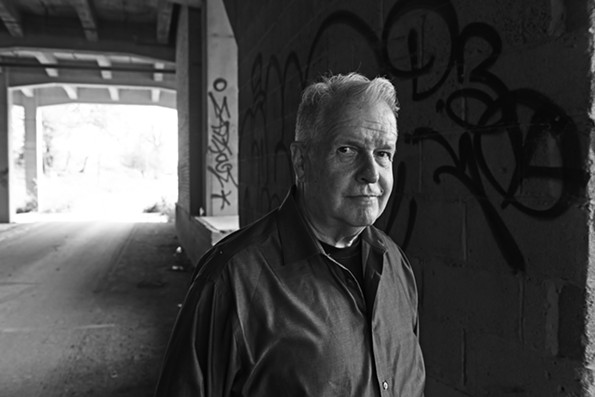 “The newsroom was always abuzz with the energy of a collection of independent, smart, confident, young and passionate journalists with a take-no-prisoners focus,” remembers Edwin Slipek, a contributing writer, as well as art and architecture critic for The Mercury from 1973 to 1975. Slipek had been editor-in-chief of The Commonwealth Times at Virginia Commonwealth University; he would later become a senior contributing writer at Style Weekly.

Before its September launch, the Mercury lured investors, including Best Products Co. founders Sydney and Frances Lewis, with a prototype issue that, according to Epps, they put together at the Harvard Crimson offices. They conducted a marketing survey that showed the environment was conducive to a news tabloid and presented (what they believed to be) a solid business plan, with salaried employees, and a projected weekly press run of 10,000 to 20,000 free copies.

Somewhat irreverent and politically leftist, the Mercury editors called their process “outsider journalism,” meaning they were willing to offend if necessary to get the story. 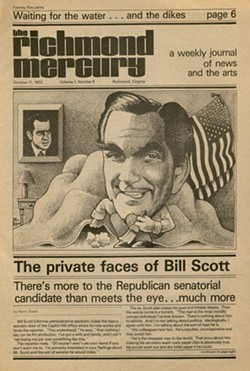 In the fifth issue, Harry Stein’s cover story, “The Private Faces of Bill Scott,” confirmed the Mercury’s outsider journalism as a legitimate news source. In 1972, Sen. William Scott was a conservative Republican from Northern Virginia dubbed the dumbest man in congress and not well-liked by his colleagues nor his former and current staff.

Stein’s withering exposé drew the attention of Nina Totenberg, who prepared a similar story for New Times magazine from Stein’s old notes and new interviews. Her story, titled “The Ten Dumbest Congressmen,” crowned Sen. Scott “The King of Dumb.” Enraged by the article and apparently recognizing Stein’s name from the New Times masthead, Scott called a press conference to announce he was indeed not the dumbest man in congress and that it was some sort of conspiracy by these left-wing punks from Richmond, Va.

Renowned artist Bill Nelson, who was lured to the Mercury from Richmond Newspapers, provided a striking cover illustration of the Republican Senator sweeping a pile of dirt under a rug.

That article received so much praise from colleagues and readers, and garnered so much attention from the mainstream press, that it proved to Stein “this new kind of journalism had little downside.”

A story by Epps about rapes inside the Virginia State Penitentiary, then a grim fortress at Belvidere and Spring Streets, and another by Charles Hite chronicling gay cruising on Grace Street, complete with a map of the “circuit” and gay slang, highlighted social issues that Richmond would rather have kept buried. Lynn Darling’s excellent articles on Richmond prostitution, the case of a young Black Lynchburg man named Tom Wansley who was erroneously sentenced to two death sentences for rape at age 16, and a searing two-part series on the Richmond City Jail, were all examples of the high-quality investigative reporting on issues studiously avoided by the conservative daily media. 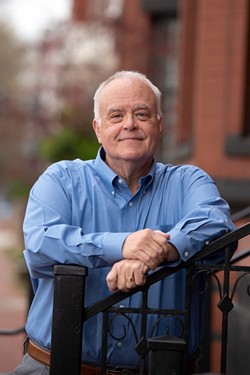 By the end of its first full year, the Mercury was flying high, continually raising the journalistic bar, with ad revenues and investment dollars flowing.

Almost every story was written by the same small number of staffers, with one serving as managing editor on a rotating basis because they wanted no strict, top-heavy hierarchy to gum up the process. There were no wire service stories in the Mercury – their only nod to syndicates was a Jules Feiffer cartoon and Jack Anderson’s nationally-syndicated opinion column. In late 1973, they also ran Garry Trudeau’s syndicated strip “Doonesbury.”

“Since there was no money for marketing or advertising, the goal was to have one story a week that would make the TV evening news on its own,” Slipek explained.

Buford’s assertion that the Mercury was willing to offend people meant the journalists had no intention of ignoring or dancing around specific topics considered off-limits by the daily papers, the city government, or the police. But that integrity began offending advertisers and annoying investors, beginning a long downward spiral of financial troubles that would eventually sink the paper. While young readers loved the audacity of the Mercury, many local businesses were not so eager to support Ivy League-educated liberals criticizing them, their beloved Republican Governor Mills Godwin, or God forbid, President Richard Nixon.

Frank Rich, who later became a well-known op-ed columnist and theater critic for The New York Times, committed an unpardonable sin by penning some negative reviews of films screened by Neighborhood Theaters. These reviews incensed the theater chain, and it abruptly pulled all advertising from the paper. Restaurants and grocery stores canceled ads when the Mercury published negative health department reports. And unlike Boston, Richmond did not have an endless supply of replacement advertisers on deck ready to fill in the gaps created by departing advertisers angered by the publication’s hard-hitting journalism.

“Being a part of the hardy, fearless gang that gave birth to the Richmond Mercury remains an indelible personal and journalistic endeavor,” said Rich, now a television producer and writer for New York Magazine, in a recent message to his former friends and colleagues that went out in an invitation to a private party celebrating the Mercury’s 50th anniversary at the Branch Museum of Architecture and Design this September. Later in 1973, the staff decided that the egalitarian editorial structure was no longer working and that an editor was needed. They hired John Carr, who had marketed himself in his interview as a “Southern journalist.”

It was not a good fit. Writer Bill Kovarick recalled in a 2013 interview that Carr “was abusive, possibly because of the stress everyone was under at the time. By abusive, I mean screaming demeaning things at the top of his lungs, ripping my work out of my typewriter while I was still working on it, yelling things at me. It was bad.”

Carr’s presence and the toxic newsroom stress soon forced many co-founders, including Epps, Rich, Buford, and others, to leave.

During its quixotic 1,000-day, 154-issue lifespan, the Mercury proved that even a liberal weekly paper in a conservative environment had a considerable impact with consistently superior investigative reporting that exposed city-wide corruption.

Slipek notes that “the editorial and news focus was aimed at keeping the city establishment in check. Trouble was the same forces controlled much of the potential advertising revenue that could have kept the paper operating.”

Despite the ever-worsening financial problems, the writers doggedly continued breaking major stories, including one about illegal police wiretaps in Henrico County that prompted several resignations in Richmond’s public works department. They exposed the RMA Expressway boondoggle and its wanton destruction of long-established Black neighborhoods. They asked tough questions about Virginia Electric & Power Company’s opaque rate structure. Editor Gene Ely wrote “A Night with the Klan” about visiting a KKK meeting on Hopkins Road. 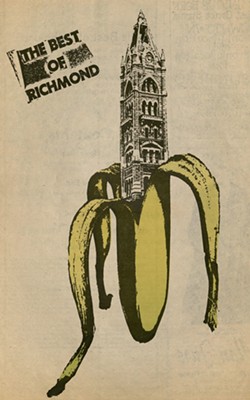 During the broiling summer of 1975, the Mercury had paying subscribers from roughly a third of Richmond’s estimated 10,000 college-educated households, and ad revenues were up 121%. Still, one afternoon Edmund Rennolds, “Looking tired and despondent, and more wrinkled than usual” (according to Ely), announced that he and the other backers could no longer absorb the almost $500,000 in financial losses. Staffers’ final paychecks were reduced to pennies on the dollar, and the Aug. 20, 1975 publishing deadline was missed.

A noble last-ditch effort launched by a quickly assembled group of investors calling themselves “the Friends of the Mercury” failed to raise enough capital, and the paper folded after the publication of the Aug. 27 issue.

Many staffers attribute the Mercury’s failure to a mix of youthful naiveté (the oldest staff member was 24), misguided marketing, an economic recession, and simple timing.

“Had the Mercury started four years later, I think it would still be around,” Epps says.

“I think we exceeded expectations for getting the kind of readers we wanted,” Rennolds recalled in a 1989 interview. “The governor read us. The mayor read us. It was tough the whole time. And we could never staunch the bleeding. And people knew we were a special publication, one that would try to speak the truth to the extent that we could determine it at whatever cost, and it did cost.”

More recently, Rennolds wrote a brief history of the paper in conjunction with the upcoming celebration. On page 22 of the handwritten summary, he speculates about the demise of the Mercury: “We made a raft of mistakes over the three-year run, most particularly with having an editorial collective running the news side. While this has worked in a few instances internationally, the Mercury desperately needed an experienced editor at the helm, to coordinate and focus the enormous talents of its young staff.”

The entire three-year run of the Richmond Mercury is available for viewing at the Library of Virginia’s Virginia Chronicle website.

Freelance writer Dale Brumfield can be reached at dalebrumfield@protonmail.com.

Correction: An earlier version of this story identified Glenn Frankel as a former editor at Richmond Mercury, he was a writer.