A new VMFA exhibit examines conceptual photography of the '70s and '80s. 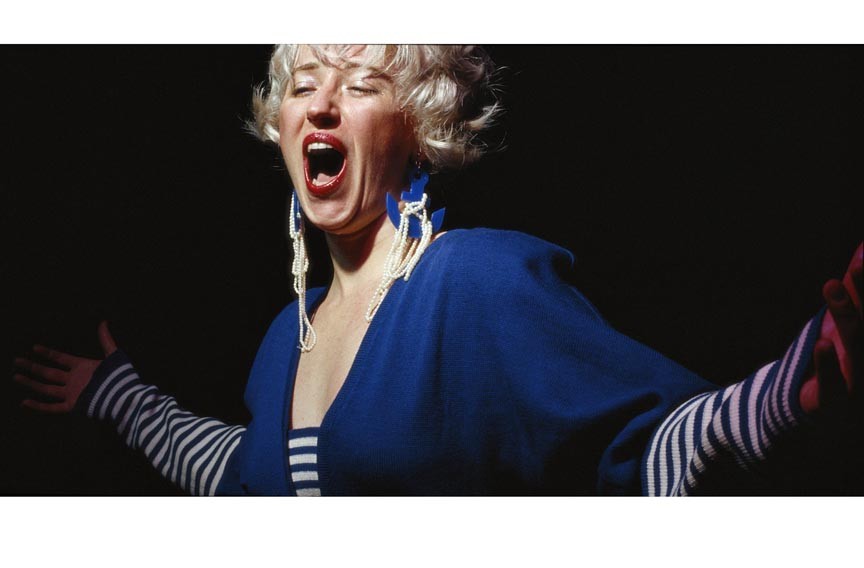 In an effort to uncover family history, I recently dug through old photographs at my grandmother's house with her help. Haphazardly tucked away in no chronological order but beginning as early as the 1890s, the photographs offered deadpan stares, smiling faces, recognizable and unidentifiable landscapes and people, momentous occasions and everyday life.

Because my grandmother has dementia, her help consisted of repeatedly shuffling through the same stacks. Although she usually recognized a person associated with her childhood, she often failed to identify her grown children or me, her granddaughter, even as I looked at them beside her.

Her degenerative memory loss is a worthwhile metaphor for thinking about photography. Like her memory, what's pictured is always performing the same pose. Whom or of what significance becomes forgotten as time passes. But the subject is fixed to certain facts or truths tied to time. Posed, time-bound and specific, every photograph freezes a subject, a place or a moment.

But where might the performance of a photograph end and the documentation of life begin? Can truth-bearing reality align itself with the untruthfulness of a photograph? The Virginia Museum of Fine Arts offers a look at how conceptual photographers, including major players such as Cindy Sherman, Annie Leibovitz and Robert Heinecken, as well as local talent David R. White and Cindy Neuschwander, explored these questions in "Unreal: Conceptual Photographs from the 1970s and '80s."

While arguing for the validity of their medium as fine art, conceptual photographers donned costumes, created elaborate stagelike environments, and appropriated other images found in advertising, on television or from art history. Many of the artists chose photography for its inherent mendacity. Even early American photography of the 19th century, including Mathew Brady's images of the Civil War or spirit photography, offered a distorted reality.

Robert Heinecken gives another view of life, this time a triple reality in "Untitled Newsroom (Jane Pauley)." Although the fuzzy photograph resembles a pixilated digital image, Heinecken made the print by placing photosensitive paper against a television screen projecting a paused image of a reporter. As a multilayered process, Heinecken's work questions multiplicity, reproducibility and value. It also asks whether subject matter, the reporter, is an integral component? Or just a necessary visual marker for abstract concepts?

Heinecken, Sherman and others explored these questions about photography and art under the influence of European theory. In his seminal text "Camera Lucida" (1980; translated 1981), Roland Barthes calls a photograph a record of "that-has-been." For Barthes, a photograph depicts death in person, or the ever-present reality of death. However, the viewer can reactivate — or bring to life — these subjects simply by looking.

Somewhere buried in my grandmother's memory, she recognizes her brother by name and remembers his role as her guardian after she was orphaned, even though he's dead. Similarly, a photograph concretely preserves and records the importance of an individual, a place or idea even if the one looking has forgotten or never knew the subject.

Memory combines recalling and forgetting to create a new reality that's both factual and fictitious. When I ask my grandmother what she did yesterday, and her caregiver provides an answer because she's forgotten, my grandmother immediately agrees with a sincere nod like she knew all along. And maybe she can — for a few moments — commit this to fact, but in reality she unintentionally performs the act of remembering. What she innocently pretends to know is actually an altered story based on another's recollection, conversation and time. True memory is learned through experiences and relationships. Because her memories aren't connected to a moment, place or person, she creates filtered memories that retain a level of truth, forgotten material and re-created details.

Similarly, conceptual photographers visually questioned the notion of perception, memory and how we understand and form — or even perform — identity. By emphasizing these recesses between concrete and half-truths, conceptual artists sought to interrogate the nature of authentic reality. Some achieved this better than others; history has canonized those examples. But several artists in this exhibition have received little examination. They're marginal conceptual photographers but not necessarily lesser.

How do we approach overlooked artists who never were adequately committed to memory? Likewise, what should I do with photographs of forgotten people and places in my grandmother's secretary? The obvious response is that we re-examine them, but this should be done with thoughtful caution. Buried within the margins and crevices — of families, history and time — are neglected minefields that run analogous to linear history. So we scrounge through the detritus and unearth the valuable remnants. Also we carefully observe that some things should be left alone or intentionally lost.

Determining what lies in which category is a monumental task, specific to audience, time and place. The Virginia Museum offers one possible solution for visitors in Richmond 2013. What will remain in another 30 years? What will be lost, and what will be rediscovered? S