At the William Byrd, longtime residents welcome remodeling and a changing neighborhood. 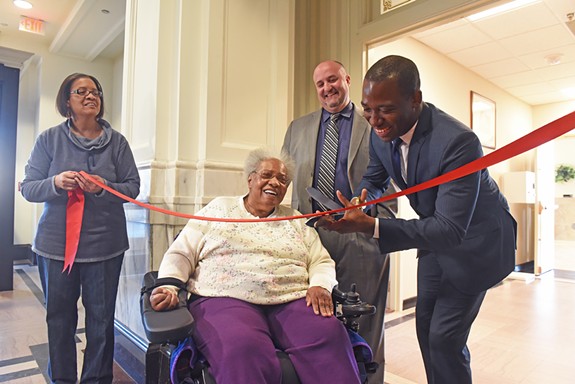 When Kate Anthony moved into the William Byrd Senior Apartments in 1996, she was among the first to live in the historic building in its latest iteration. And she probably wasn’t the only one to remember the early years of the William Byrd Hotel -- a cutting-edge skyscraper when it was built in 1925 across from the Broad Street train station.

But Anthony, 82, also was moving into a piece of her personal history. Her father was a bellhop at the hotel that she would call home. And he worked at the train station that Anthony now frequents as the Science Museum of Virginia, attending IMAX movies with her daughter, Venecia Anthony.

The original heyday of the transportation hub might have been the '20s and '30s, but Anthony and the other 103 residents are watching a new one take shape around their home at 2501 W. Broad St. With a $5 million renovation recently complete, tenants of the 11-story Classical Revival-style building welcome nearby development and the rapid bus line as a new era for the neighborhood.

Anthony grew up in Goochland County. Her mother died when she was 11 and, when an older sister moved to New York, Anthony and three other siblings moved into the city with their aunt. She graduated from Van de Vyver Institute, a former school at North First and East Duval streets in Jackson Ward.

Van de Vyver was part of the historic St. Joseph’s Church, the first black Catholic Church in the South. Only part of that complex remains after an urban renewal project almost 30 years ago demolished most of the block.

“I stayed with my aunt till I was old enough to get a job and find my own way,” Anthony says. The first job was making Venetian blinds on Broad Street.

She met her future husband through a sister’s friend. “He asked me would I marry him,” Anthony says, “and so I told him, yeah.”

Anthony has suffered two strokes -- her first the day she and her husband signed the lease at the William Byrd. She has slurred speech and mobility issues, but her daughter helps tell her story, laughing at her mother’s matter-of-fact recollection of agreeing to marry.

Wedded in 1956, Anthony and her husband moved to the North Side, where they raised five children. “I’ve seen the city change a whole lot,” she says. “The people, the surroundings.”

She later got a job as a cafeteria cook at a health insurance company and worked there for 15 years. She and her husband, who died in 2011, jumped at the chance to live in the William Byrd.

“I read it in the newspaper,” she says. The housing nonprofit Project: HOMES was leveraging historic and affordable housing tax credits to renovate the building, which had been vacant for some time.

“And I’ve been here in the same apartment for 20 years except when they remodeled again this year,” Anthony says. She’s eager to show the upgrades -- the ability to roll her wheelchair up to the microwave and the sink. Her bathroom is larger and more accommodating.

“We’re really proud in the sense that we’re restored and preserved an historic asset and we’re supplying affordable housing for our elderly,” Project: HOMES executive Lee Householder says. “And it’s a location that continues to be great, with great income diversity, right up against the Fan.”

He says the renovation process started three years ago, and most residents were in another apartment for about three or four months before returning to their original one. A ribbon-cutting March 22 celebrated the end of the remodeling.

“When she first came back into this apartment, she just rolled around and around and looked,” Anthony’s daughter says. “I think she was so excited about the space.”

Venecia lives on Stuart Avenue and visits every day. In addition to Science Museum movies, they enjoy the proximity to groceries and the pharmacy -- and Chicken Fiesta.

“We’re excited for the Pulse to come,” Householder says, pointing out the tiny parking lot. Few residents have cars, and many use the in-house bus services.

All five of Anthony’s children live in Richmond. There are also 10 grandchildren and, after a moment of reflection, she counts that she has two great-grandchildren, too.