Memorable Moments of Weirdness From the Annual Television Critics’ Tour

As summer wound down, the Beverly Hilton in California played host to the Television Critics Association press tour, aka the TCA tour.

If you aren’t familiar with this biannual event, it’s simplest to describe it as the television equivalent of a dog-and-pony show: the broadcast, cable and streaming networks trotting out their newest or most buzz-worthy programming for the assembled critics, with the casts and creators of these programs taking the stage for anywhere from 20 to 45 minutes to answer questions from the critics.

Tim Goodman, a writer for the Hollywood Reporter, famously described the TCA tour as a “death march with cocktails,” and by the time the two and a half weeks of the tour are over, even the free booze isn’t enough to keep most critics from making a mad dash for the door. But those who survive the ordeal walk away with such an abundance of material to use until the next TCA tour.

Here are some highlights from throughout the long, strange event:

Panel that didn’t need to happen but still ended up being entertaining: “Stranger Things” (Netflix)

You can’t blame Netflix for trying to build on the existing buzz around the show. There was never a chance that producers Matt and Ross Duffer were going to reveal anything about season two, because it hadn’t even been two weeks since the first season premiered when the panel took place. But the kids from the show — Millie Brown, Gaten Matarazzo and Caleb McLaughlin — were funny, and it was great to see Winona Ryder onstage with them. “The reaction has been completely overwhelming in the best possible way,” Ryder said. “I don’t think I was expecting it, but I think I have sort of a great system, where my parents read everything, and they forward me the positive stuff.”

Best anecdote about deciding to do a series: Kiefer Sutherland, “Designated Survivor” (ABC)

“I had no intention of doing a television show. And I was very busy, but I felt I needed to give this script a cursory read so that I could at least respond with some intelligence and explain why I couldn’t do it. And I found myself on page 22, and I remember saying, ‘Shit.’” 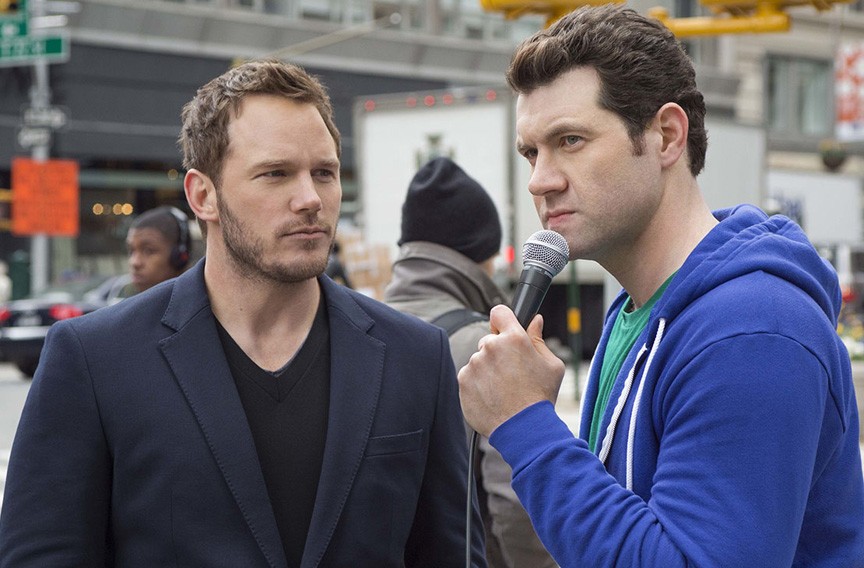 Best dime-store diagnosis by a panelist: Billy Eichner, “Billy on the Street” (truTV)

“I think everyone wants to hear a story about how I got punched in the face or something. Which says more about you than me, really.”

Tig: I didn’t think about [sexuality] when I was doing the show or pitching it. It wasn’t gay-themed or …

Jessica: I didn’t even know you were gay!

Tig: I am dabbling. I’m not sold on it. I’m 20-something years into dabbling in my sexuality.

We knew something outrageous was about to happen when they started passing out champagne and chocolates, but when they brought out the velvet-covered chaise lounge, it was clear that E! was about to take things completely over the top. Still, who could’ve predicted that Mariah Carey would emerge from backstage with a throng of shirtless men and let them join forces to serve as a makeshift chair for her while she answered initial questions? Or that she would have her makeup touched up in midpanel? If nothing else, you can’t say that Carey doesn’t know how to make the most of her moment in the spotlight.

The series is about as pedestrian as multicam sitcoms get, and James is clearly playing Doug Heffernan from “The King of Queens” again, except this time he’s playing a husband and a father. But rather than take abuse from the critics about it, he tackled it head on. “It’s a constant battle in my career to say, ‘I don’t want to do the same thing again,’” James says. “You say you want to do something different, but automatically you lose half your audience, the people that enjoyed what you were doing, so you do more of that. So the trick is — and I think we’ve done it really well — is to kind of do a blend of both.”

Most off-color joke in a panel by a puppet: Triumph the Insult Comic Dog, Summer Election Special 2016 (Hulu)

“You know, everybody loves Hulu. Time Warner just announced that it now owns a piece of Hulu. Fox owns Hulu. NBC owns Hulu. Even Disney. Yes, Hulu has so many fingers inside of it, it could easily be a member of the Duggar family.”

As creator of “Gilmore Girls,” Sherman-Palladino long said that she always knew what the final four words of the series would be, but she wasn’t there when it ended its run on the CW in 2007. Now that it’s coming back as a four-episode limited series, it’s no surprise that she’s finally going to take advantage of the opportunity to use those four words. But because of that, she offered a few words of warning to viewers.

“You know, it would be great if people who wanted to see the last four words first got some therapy before it actually aired and got rid of that inclination, because it really is a journey leading up to the last four words. And I do think that it’s going to mean a lot more if you’ve taken the journey, and it’s going to mean a lot less if you just flip to the last page. That being said, what can I do? So I would hope that people would want to take the whole trip. It’s a fun trip. It’s worth it.” S