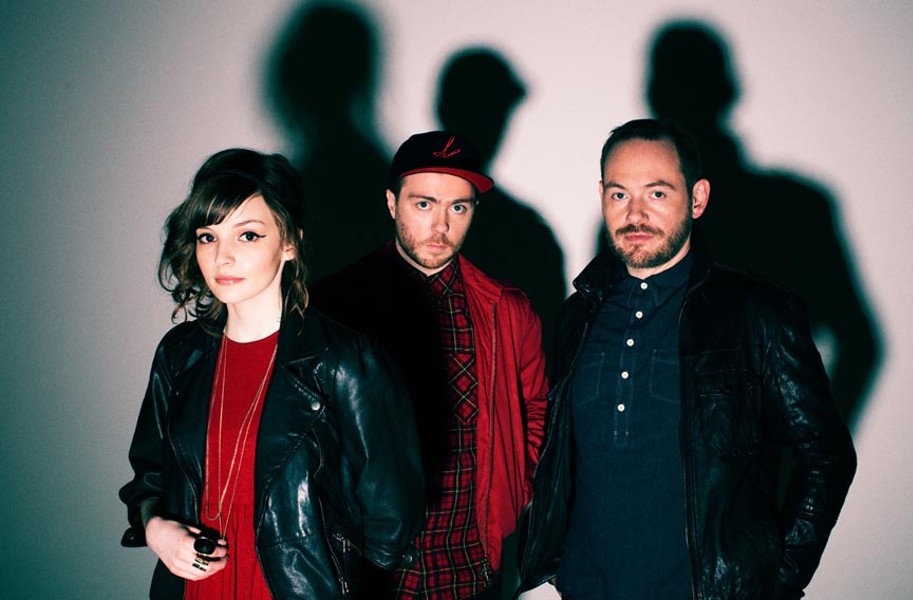 In a residential area on the south side of Glasgow, Scotland, is a basement studio crucial to the history of Chvrches. Since 2007, Iain Cook — guitarist and synth player of the hotly-tipped, synth-powered trio — has rented the compact and relatively Spartan location. When Cook hasn't been using the space to compose music for film and television projects, he, Chvrches lead vocalist Lauren Mayberry and synth player Martin Doherty have spent hours developing the band's sound.

"The Bones of What You Believe," Chvrches' debut full-length, which landed in September, was made in this setting. "It was very important that we had a place to go that was quite isolated and (where we) didn't have to abide by time schedules of normal studios and wait for producers to come in and things like that," Mayberry says. "We could just go in and work on it in a quiet space."

Mayberry first entered the studio in fall 2011 when Cook was producing an EP by Blue Sky Archives, an indie-rock outfit that included Mayberry. Cook mentioned to her that he and Doherty, an old university friend of his, were starting to work on a new, electronic-music-oriented project and invited Mayberry to contribute. Once established as Chvrches, the group put in months of studio time before placing anything online. Eventually, it launched its work into the ether to see if it would take. Interest swelled and the band had its inaugural live performance in July 2012 in Glasgow. The group has long been tethered to the notion of indie-pop, likely for a variety of reasons: its humble beginnings, its generally unadorned sensibility in interviews, the stamps of approval it received from indie-friendly tastemakers such as Pitchfork and Stereogum. "The Bones of What You Believe" is coming out on Glassnote, a prominent independent — and indie-rock-oriented — label.

Truth be told, Chvrches are among a fleet of young artists who represent a current wave of indie-pop artists who sound more indie in theory than in practice. In a recent Grantland piece, music critic Steven Hyden sketched out this fascinating phenomenon. He noted that 2013 releases from a bevy of linked-to-indie-pop artists — Chvrches, Haim, Lorde, Icona Pop, Charli XCX — have "nothing that's weird, experimental or potentially off-putting about them. ... They are simply pop records."

This analysis resonates especially well with Chvrches, whose tunes are driven by gorgeous, memorable and cleanly produced synthesizer hooks, Mayberry's agile, girlish voice and broad, melancholic lyricism. Each Chvrches member has emphasized an interest in making immediate, up-front melodies. Mayberry has cited Kate Bush, Cocteau Twins, Cyndi Lauper and Whitney Houston as influences and says she doesn't "have a lot of time for things that are deliberately, achingly cool."

In her Style Weekly conversation, she displays no attachment to the notion of indie pop — or really any label. "There are enough bands that write songs [with] a cynical goal in mind of appealing to a certain demographic, whereas for us, when we were writing these songs, the first things we were thinking about were melodies and things like that rather than trying to appeal to a trendy market," she says. "It's just silly in my mind that melody and pop songs are looked down upon by some people, and I don't really see why it has to be like that."

Still, this open affection for clean songwriting doesn't mean that Chvrches doesn't display other indie-friendly characteristics in interviews. When talking about her aspirations to write lyrics that are equally universal and personal, she brings up Elliott Smith and Death Cab for Cutie as antecedents. Mayberry has called herself paranoid about representing the band as a three-piece entity and not just her with two guys in the background. Humility comes through as she reflects on what she'll take away from this period in her life. "I hope that we can just enjoy the experiences as they're happening and be part of [our] choices," she says. "That's just something that is your responsibility in your day-to-day: to make sure that you do things that you believe in." S