Scott Elmquist Hundreds gathered for a gun legislation unity vigil this morning at the Virginia State Capitol.
Protesters and activists from both sides of the gun debate descend on the Capitol on the morning of Tuesday, July 9.

As members of the General Assembly prepare for a special session on gun reform called by Governor Ralph Northam, elected officials and community members address a crowd of several hundred at the bell tower, urging legislators to vote in favor of what they call “common sense gun laws.” Around the corner, gun rights advocates line up outside the Pocahontas building, many with pistols tucked into their waistbands and neon orange stickers with the words “Guns save lives.”

Marco Thomas, a city resident who works for the community transformation organization Richmond Opportunities Inc., shares his story during the unity vigil organized by the Richmond Peace Education Center and NAACP.

Thomas recounts the experience of being shot eight times during an armed robbery that “turned ugly real quick.” He goes on to detail his complex history with firearms, recalling a time when he was afraid of his “brothers in the community,” the police and his own family members. Holding a gun in his community equates to power, he says, and it wasn’t until he spent time in jail that he put the gun down.

“I began to learn how to take pleasure and pride in myself,” he says of a recovery program in the city jail. “I had a lot of self hate. And anybody that looked like me or acted like me, I had a lot of hate for you as well.”

Thomas is in favor of gun reform. But he urges those out there rallying to understand that, especially in low-income communities of color, the response to gun violence has to go beyond changing the laws.

Among the ralliers are Keanan McGonigle, Liz Ghandakly and Rohini Siva, members of the American Medical Student Association. McGonigle and Ghandakly traveled from Washington for the rally, and Siva made the trip from Norfolk.

“Especially in D.C., it’s so common. It’s something you’re going to see on every shift, so just seeing it so commonly makes me want to do something about it,” she says.

McGonigle, who attended medical school at Tulane University and works as a physician in Washington, nods.

“Until you’ve seen a machine providing compressions on somebody’s lifeless body because they’ve been shot eight times, you can’t imagine what it’s like to see gun violence like that,” he says, holding a poster that reads “This is our lane.” The sign is a reference to a Twitter debate that started last November, when members of the National Rifle Association advised physicians in favor of gun reform to “stay in their lane” and remove themselves from the gun debate.

Lifelong Chesterfield County resident Sheila Bynum-Coleman, a mother of five who was appointed by former Governor Terry McAuliffe as the first black woman to the Board of Contractors, is challenging Delegate Kirk Cox’s 29-year hold on the 66th District. And for this candidate, the gun debate is personal.

“My daughter was shot in 2016, and she survived. But so many people have not survived,” Bynum-Coleman says. “We have to do something. And look at all of those people out here. People want to see something done. And to just ignore it and act as if it doesn’t matter is irresponsible.” 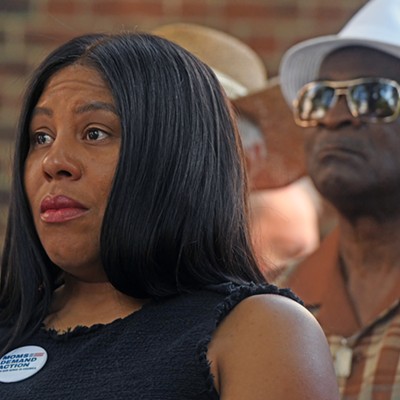 Half a block away, Haymarket resident Katie Northrop quietly stands in line, waiting to enter the General Assembly office building. She’s a stay-at-home mom to three kids and a fierce supporter of the Second Amendment. This is her first protest, and she dons a red “Make America Great Again” hat for the occasion. Her pistol is at home, but she has a concealed handgun permit.

Northrop made the trip because she “doesn’t want the Virginia legislature to take away our gun rights.” Specifically, she says, she’s against any policy that would allow jurisdictions to ban firearms in government buildings.

“It would make it cumbersome so people who can lawfully carry would be too confused and not know how to do it,” she says.

As for other proposed policies, like banning silencers or bump stocks, Northrop says she doesn’t think they should “mess with any of it” because “law-abiding citizens need things to protect themselves.” She worries that it’s a slippery slope.

“I think it’s a starting point for them to access ways to try to put in other restrictions,” she says. “More people are killed with cars than they are with guns, but they’re not banning cars.”

Data released by the Centers for Disease Control and Prevention reveals that in 2017, there were 38,659 motor vehicle traffic deaths and 39,773 people killed by firearms.

Around 1:30 p.m., less than two hours after the special session began, the Republican-controlled Virginia Senate adjourned without voting on any legislation.

Shortly after the session ended, the mayor released a statement calling Republicans in the General Assembly “not just spineless but flat-out cowardly.”

“By not allowing for a single vote on legislation or a single word of debate on commonsense gun control bills, they dishonored the victims of gun violence across Virginia,” the statement reads. “They have thumbed their noses at their responsibility and at the citizens of Virginia that they were elected to protect.”

Sabrina Moreno contributed to the reporting of this piece.